I have a backup in case the cardboard wonder is a bust. I made a pinhole “lens” on an M42 adapter for the Canon 60D. With a bit of luck, I’ll have images from both.

Well, the 3rd roll was a bust. That’s the risk using expired film.

This is from the 1st roll I shot with this camera. I used a Canon 50mm/1.8. The “II” version with the plastic mount. No idea of the settings. I scanned the print. Negatives are buried in a box somewhere. 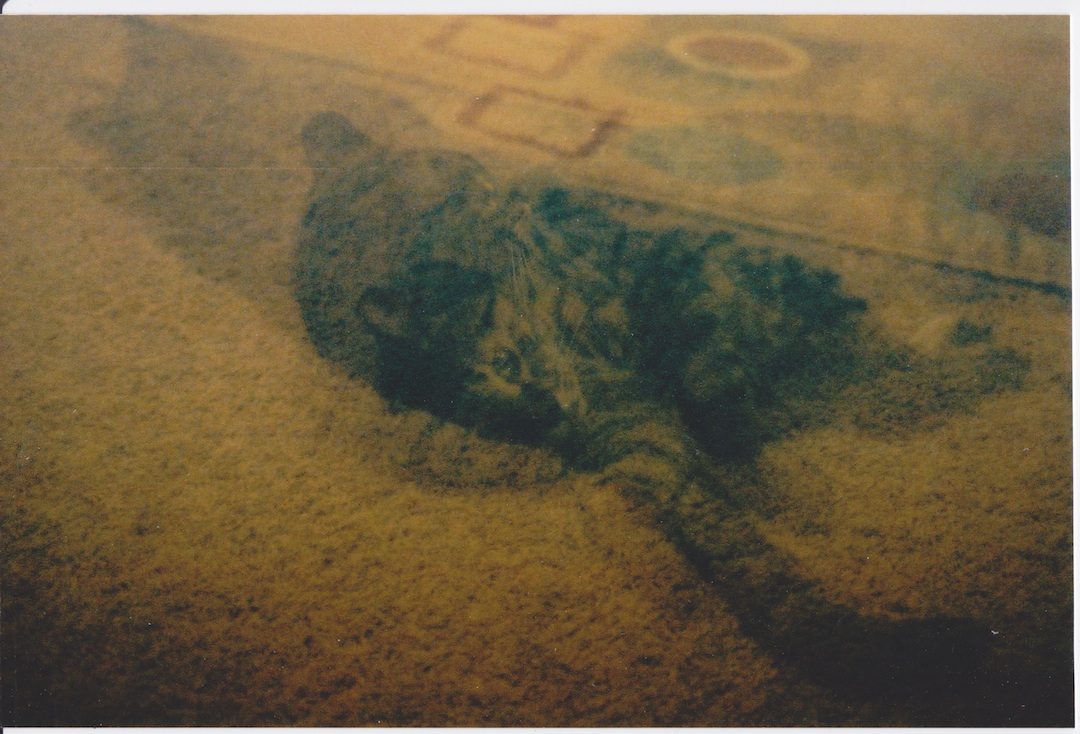 The 2nd roll was expired (02/2003) ISO 800 Kodak Max. Between the film grain, age grain, and scanner noise (had it done at processing) there wasn’t much to work with. I’ll rescan the negatives Sunday or Monday and see if I can improve what I have. Sigma 70-300mm. No-name 2X extender on the moon images. 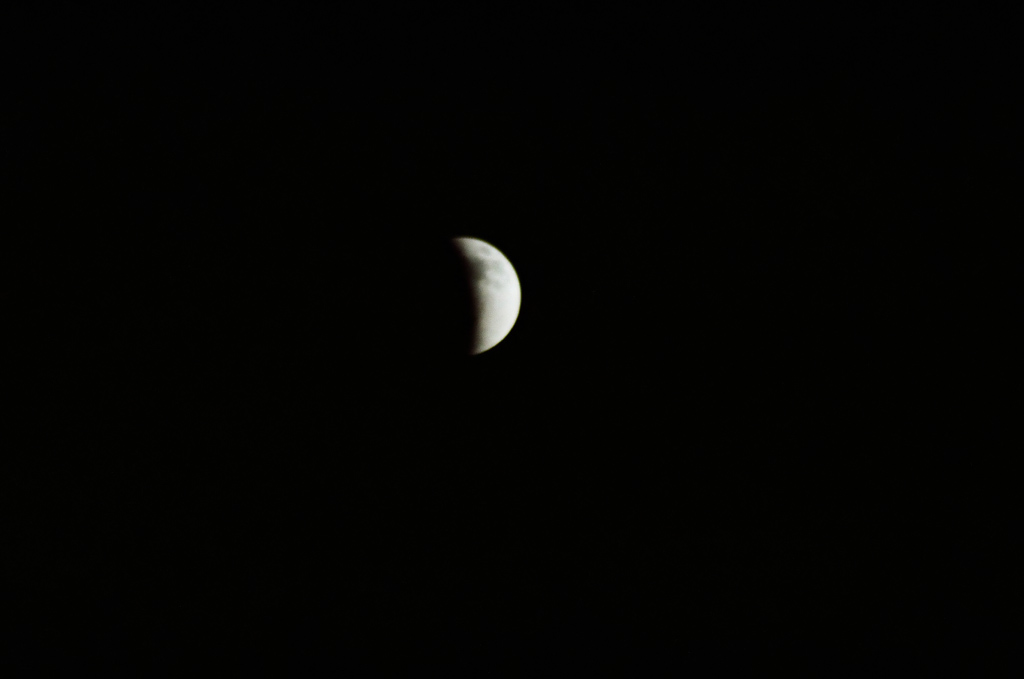 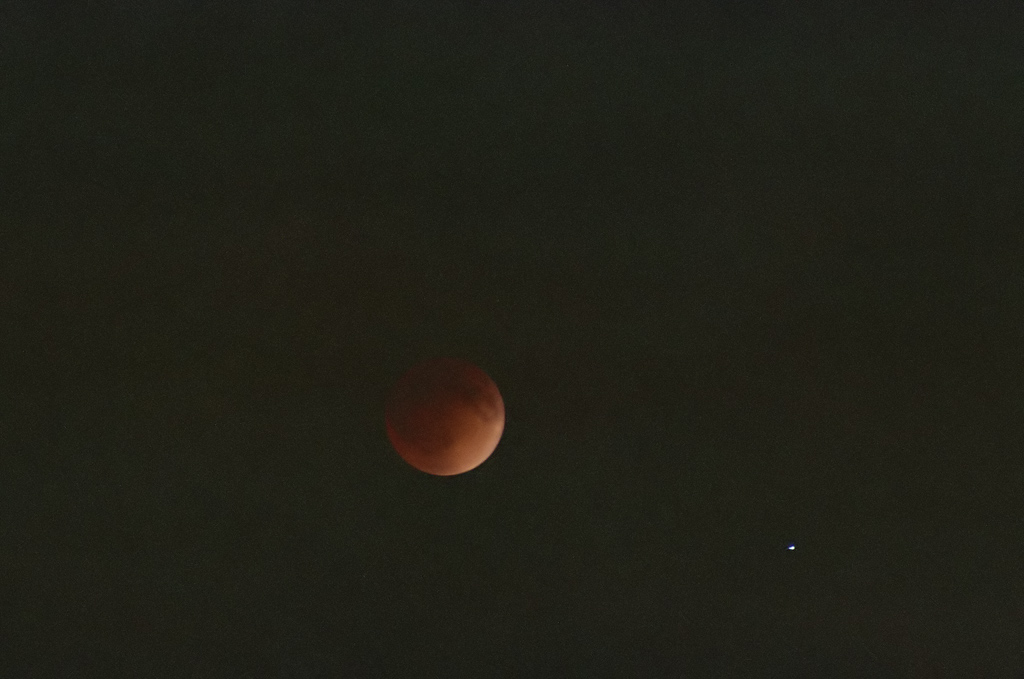 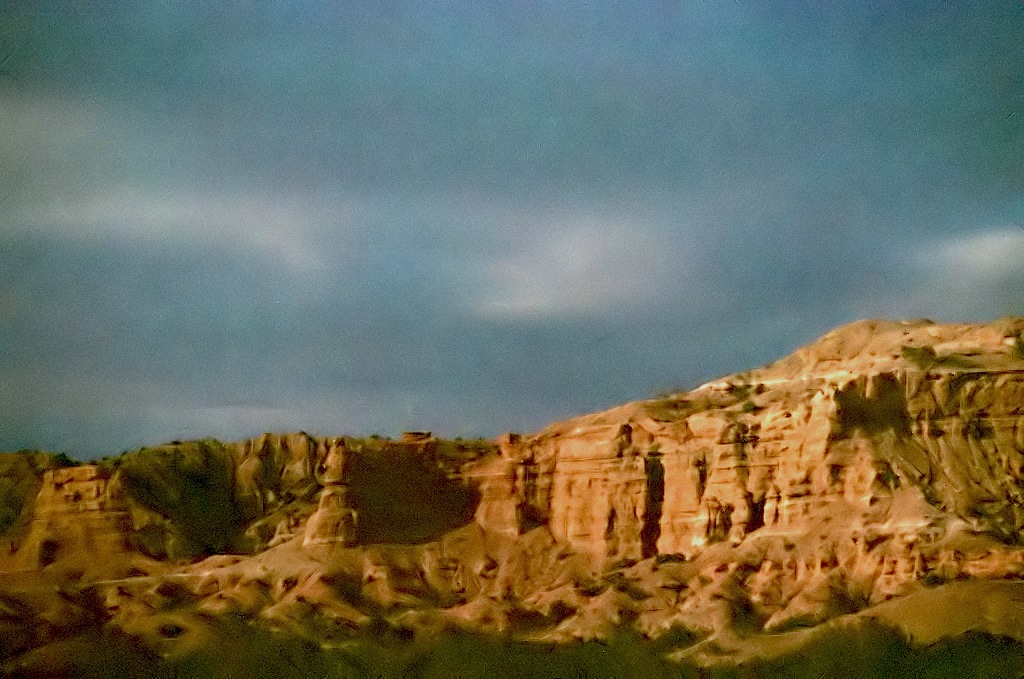 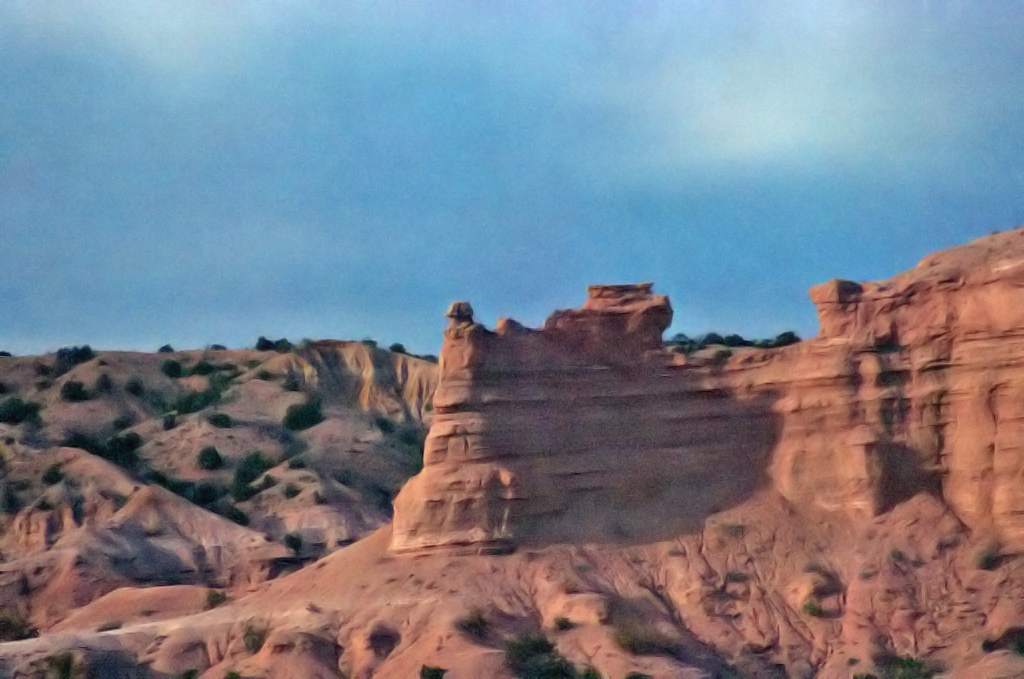 These 2nd roll images have way too much noise reduction applied. I’ll update after the negative scan.

Sometimes, videos are one take, trim off the ends when I walk into and out of the frame, and done. Other times, like now, it takes multiple takes and editing out the wazoo, and it’s still lame.

It turns out the B&H 828 film isn’t cut down 120 roll film, it’s 35mm (135) spooled with backing paper. Because 828’s frame size is 40×28 mm vs. 36×24 mm for 35mm film, the image overlays the upper sprocket holes. 828 had a single index hole per frame on the bottom so the image on 35mm film is above the bottom sprockets. The Bantam Special has the film index hole sensor. You push a button to retract it and then let it go so it can fall into the next frame’s hole. I expected a smooth roll (120 has no holes) so I used the counter window and ignored the button. I thought the camera was having advance problems but it was hanging up on the sprocket holes. I got a partial frame on one shot and two frames that overlap by about a third.

828 is an 8-frame-per-roll format but I’m posting a few more images than usual. I want to show the sprocket holes and other details. All are scanned to TIFFs on the CanoScan 9000f, 4800 DPI, millions of colors unless otherwise noted.

Not a great photo but if I crop out the cardboard it’ll be nice. 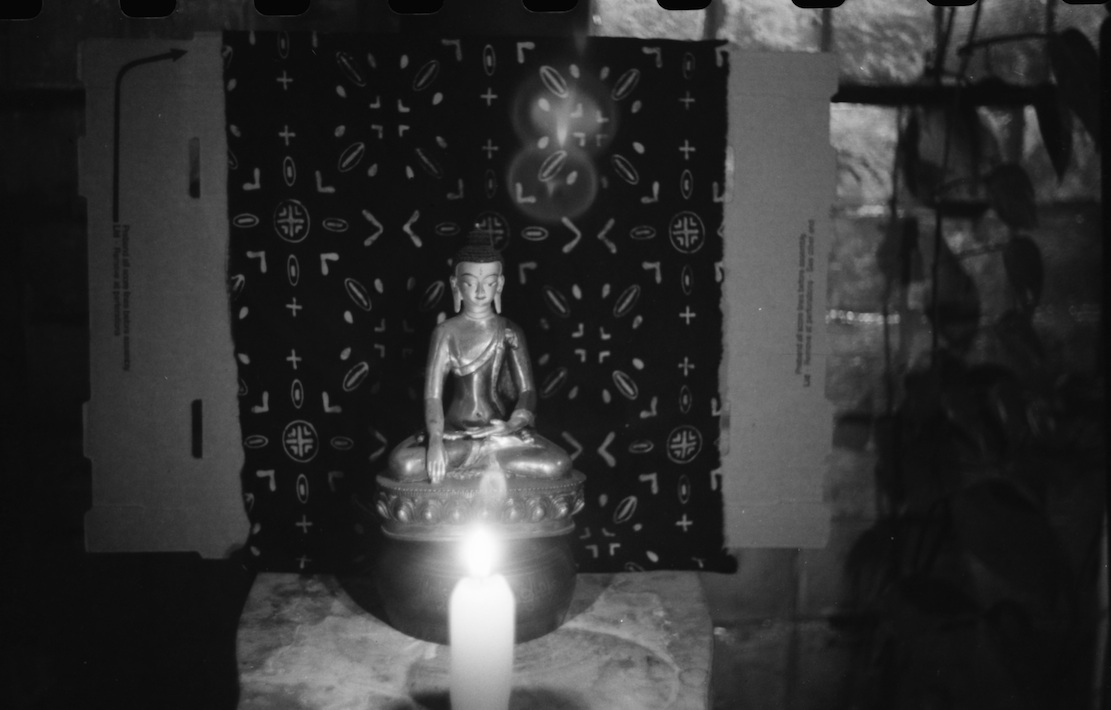 Both images were scanned using Image Capture.app. The software takes the selected area into account when determining the exposure so they’re a little different — the sprocket holes are black-black. I suspended the film in the 120 holder to get the holes. 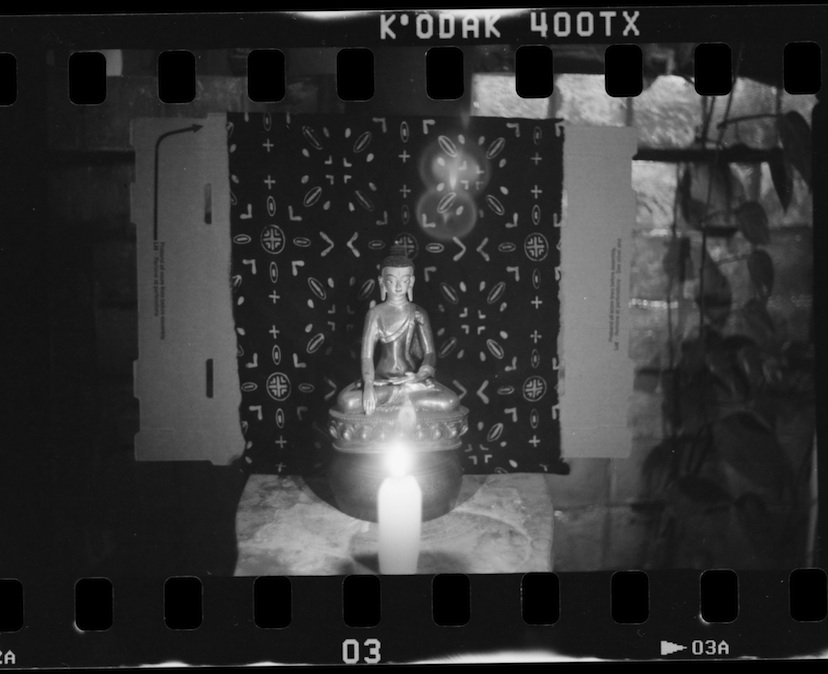 A nice thing about B&W process B&W film is that scanning in color gives a nice sepia tone. Color process is convenient but the emulsion is orange. 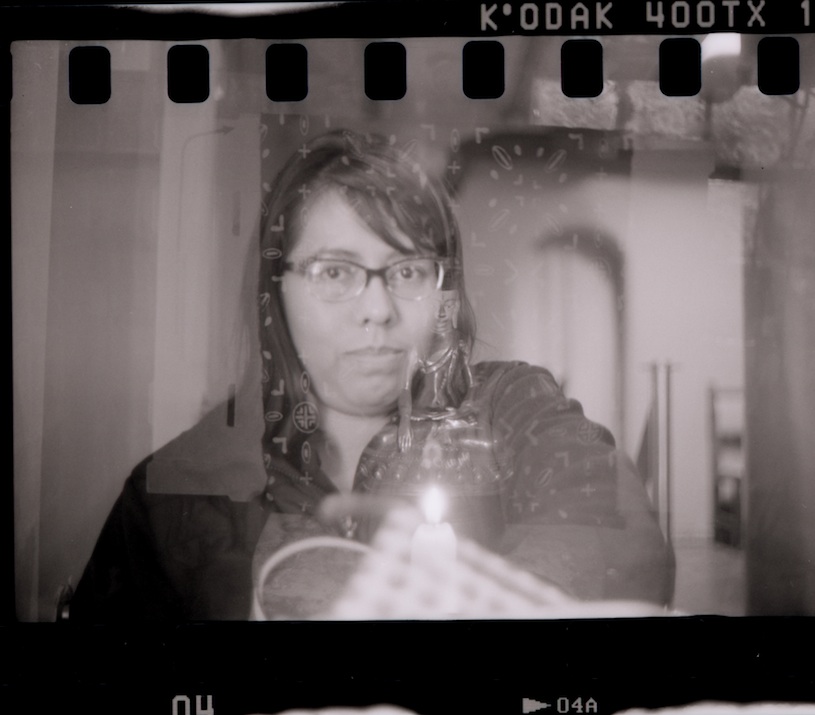 Double exposure. Was I doing shoot and wind or wind and shoot? The index sensor is a useful thing. 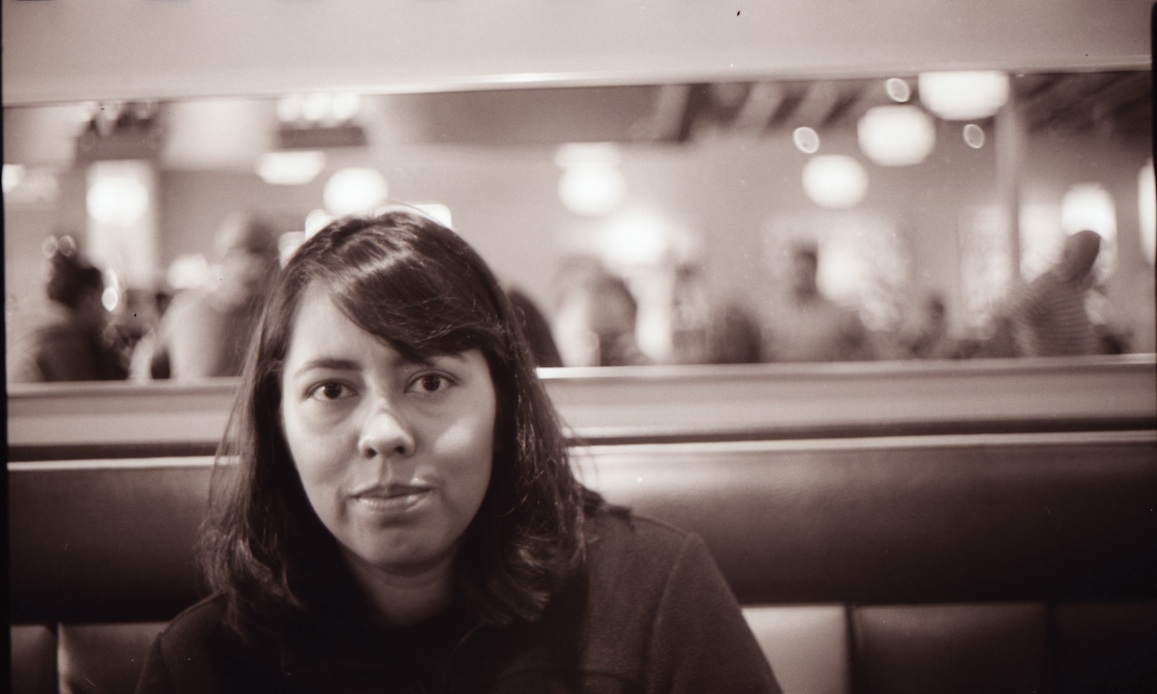 Nice bokeh. I don’t remember the shutter but this was at f/2. 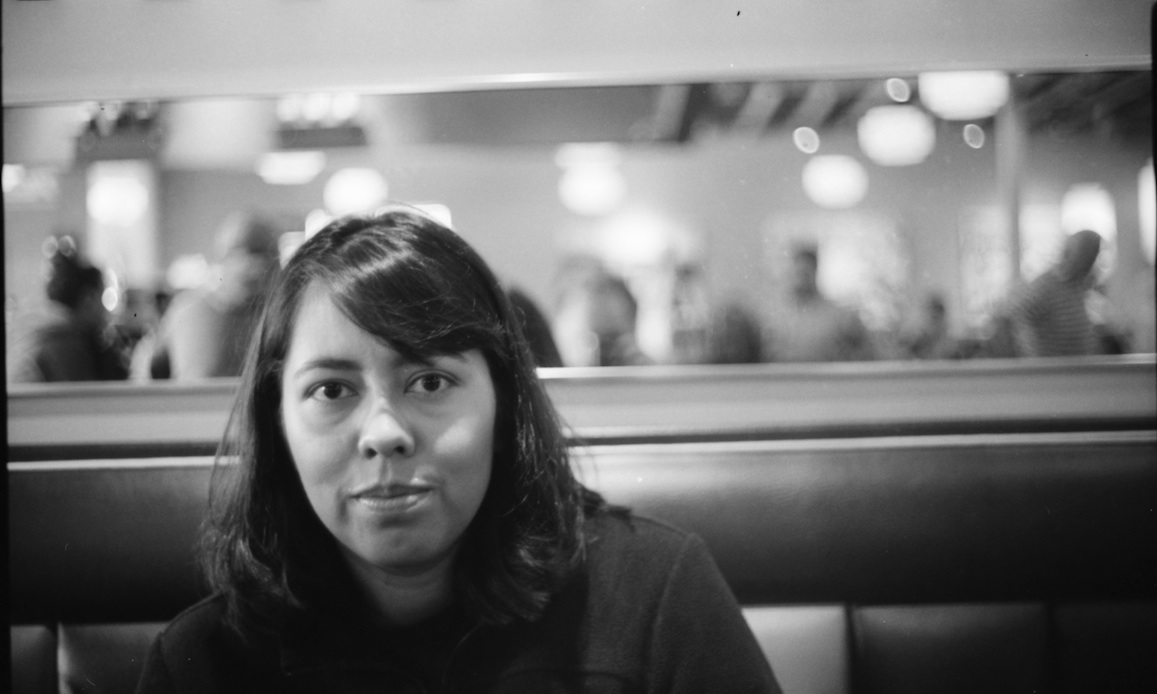 Same image with a straight gray scale conversion (saturation slider all the way to the left in Preview.app). 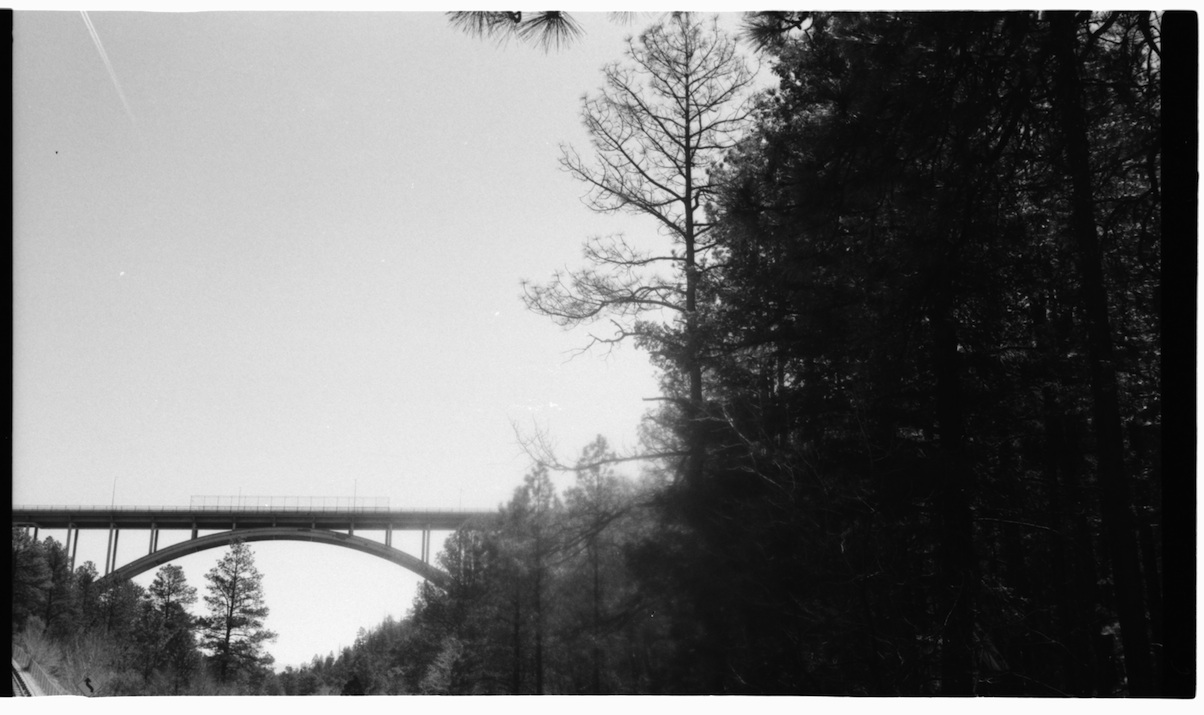 I got a yellow cloud filter in the case with the camera. It really makes the clouds pop. Scanned to B&W with Scan Gear. 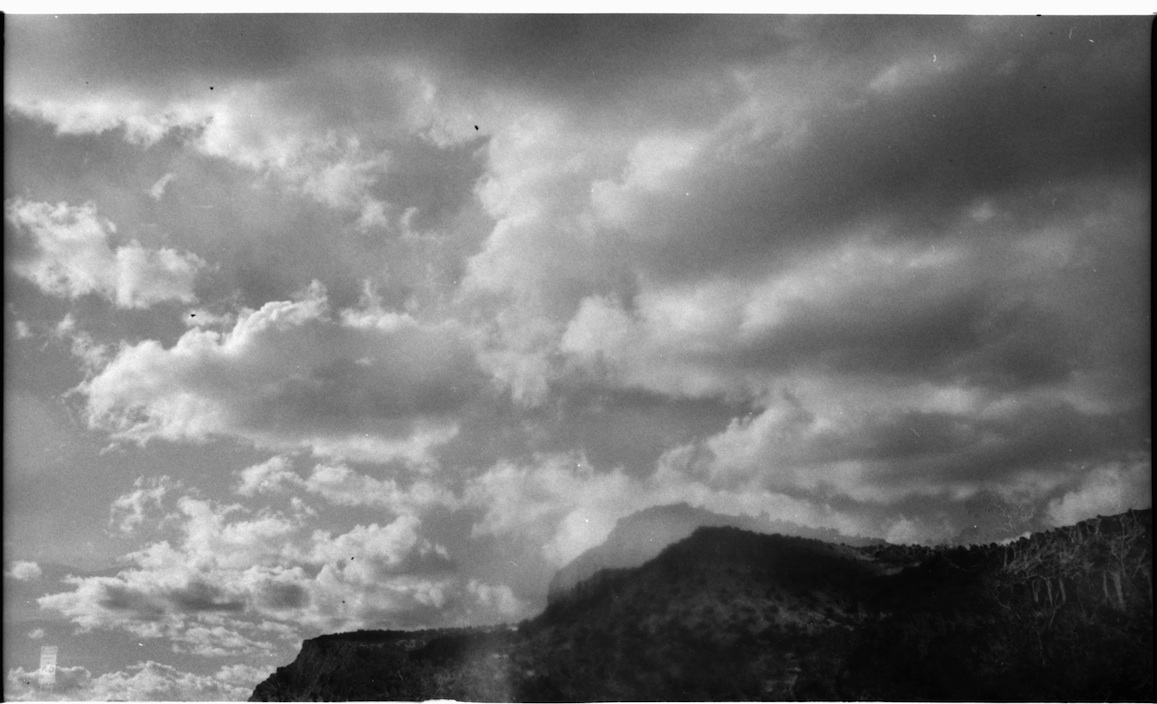 I have a second spool now, some nice 120 film, and a cigar cutter. I can’t wait to shoot more with this camera!

Shot with Canon 60D and Sigma 250mm. I’ll follow up with some stills.

One of my derp-ier videos. I started a day late and I’m trying to finish my taxes and get cameras ready for the lunar eclipse.

I know I say it a lot but I really like this camera. This post has one of each of the ways you can shoot with it. The wire is programmed auto exposure — all I had to do was focus. The landscape is manual and the last one is aperture priority at f/1.8. 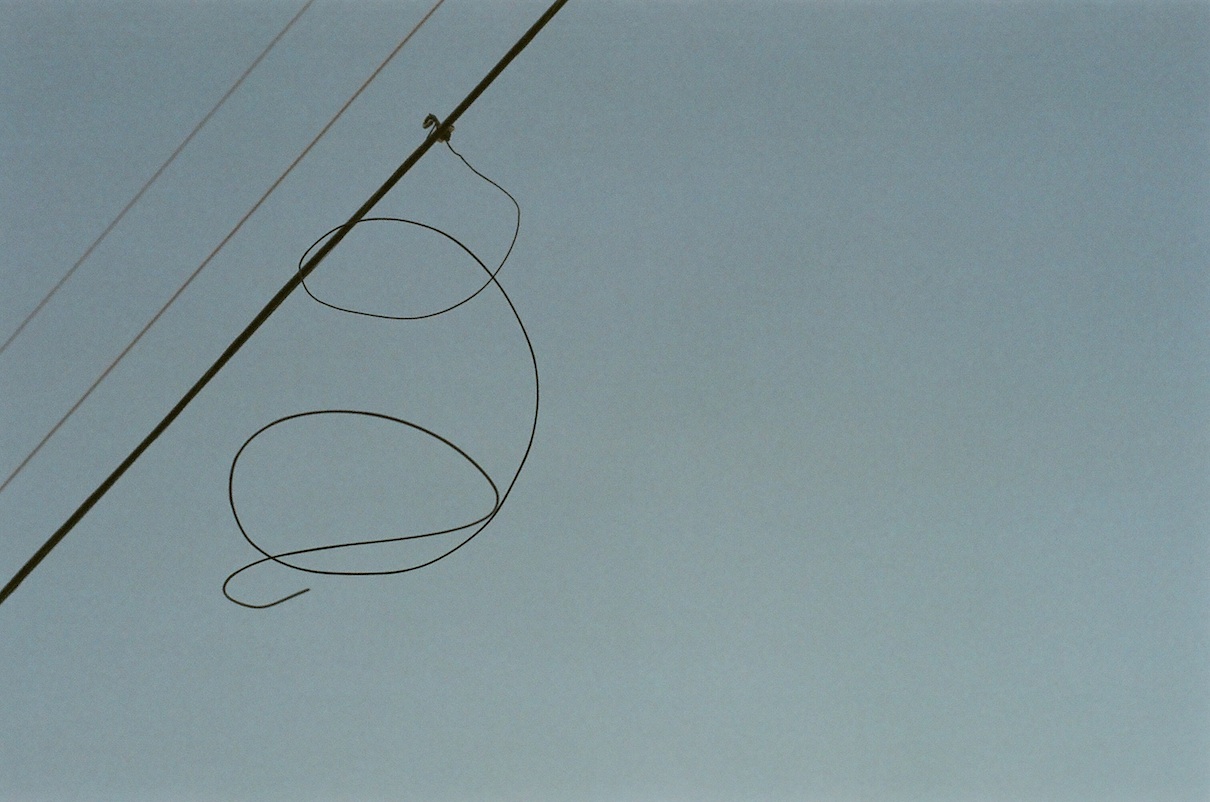 I like the shape of this wire hanging from the power line near my house — it looks like a little scribble-dude hanging on for dear life. 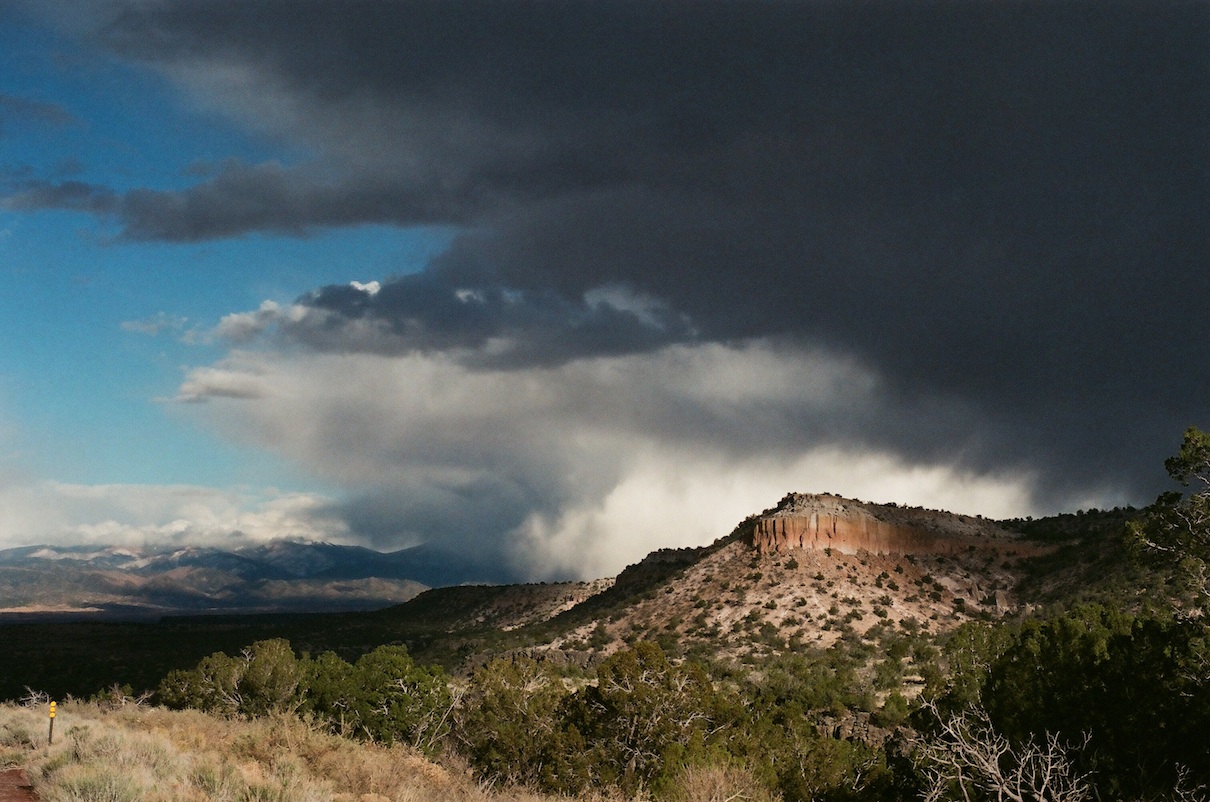 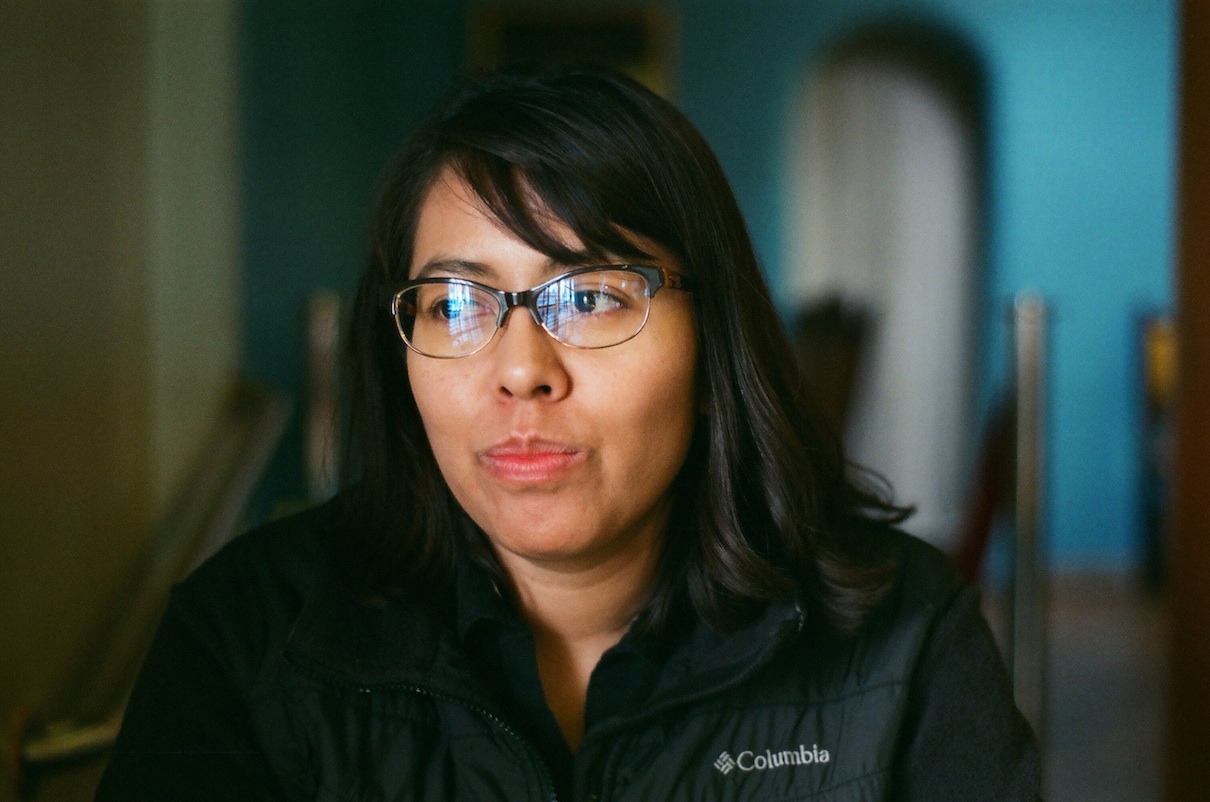 My sweetie at Thai Café.

The EM and FG-20 are nice cameras, but they’re both missing some of the features of the FG. Correction: Another source says the EM will also work at 1/90 sec. without a battery.

Another fun camera. ISO 3000 film takes some getting used to. Scanned on the CanoScan 9000f using Image Capture.app and Canon’s TWAIN driver. 4800DPI TIFF in millions of colors. Resized to 5% and converted to JPEG for upload.

The trucks are behind a chain link fence so the challenge was getting the lens through one of the holes without messing up the framing or blocking the shutter release. 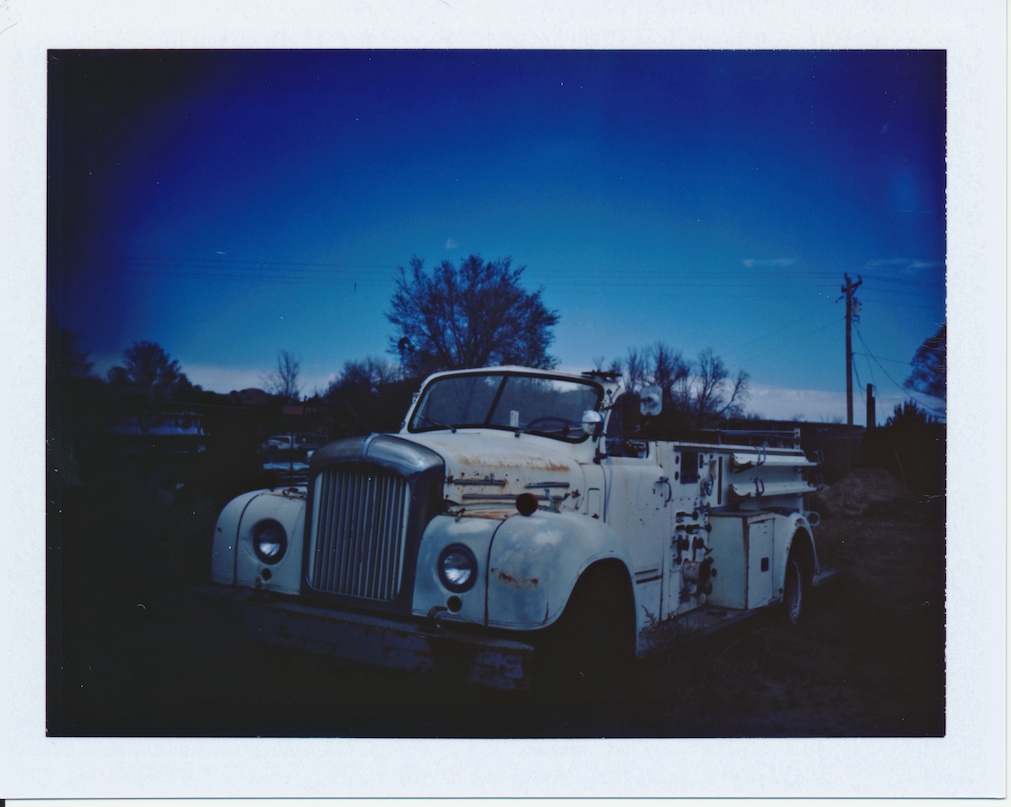 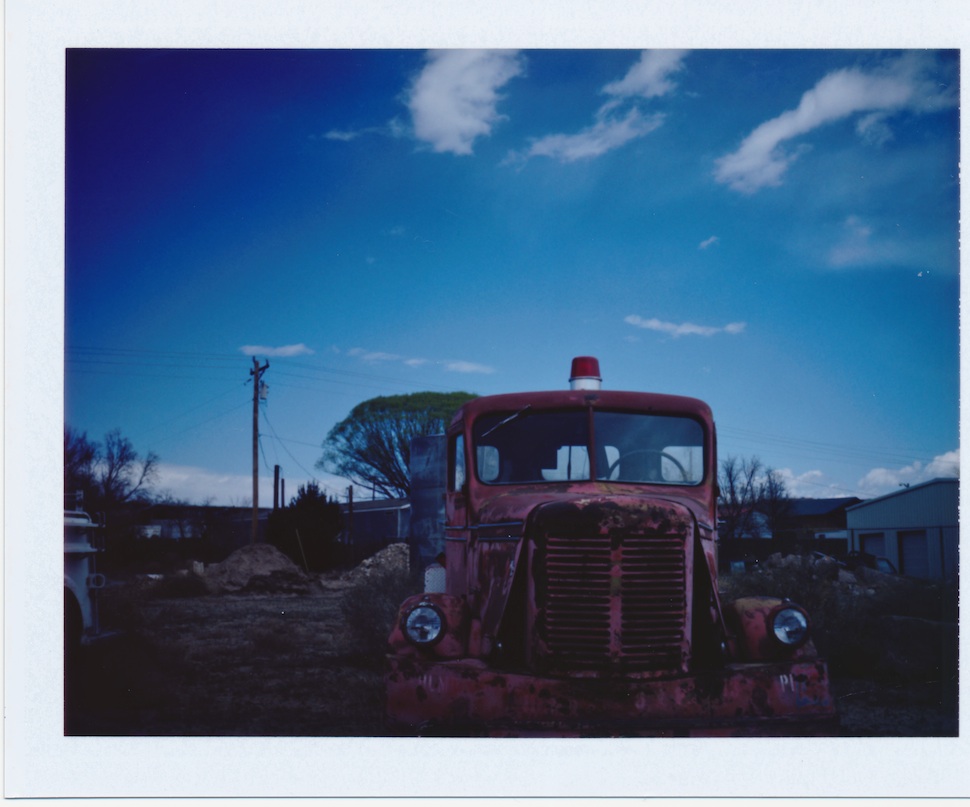 I’m not sure what I did here. I think I left the camera on the indoor setting. The flares work since it’s a ghost bike. 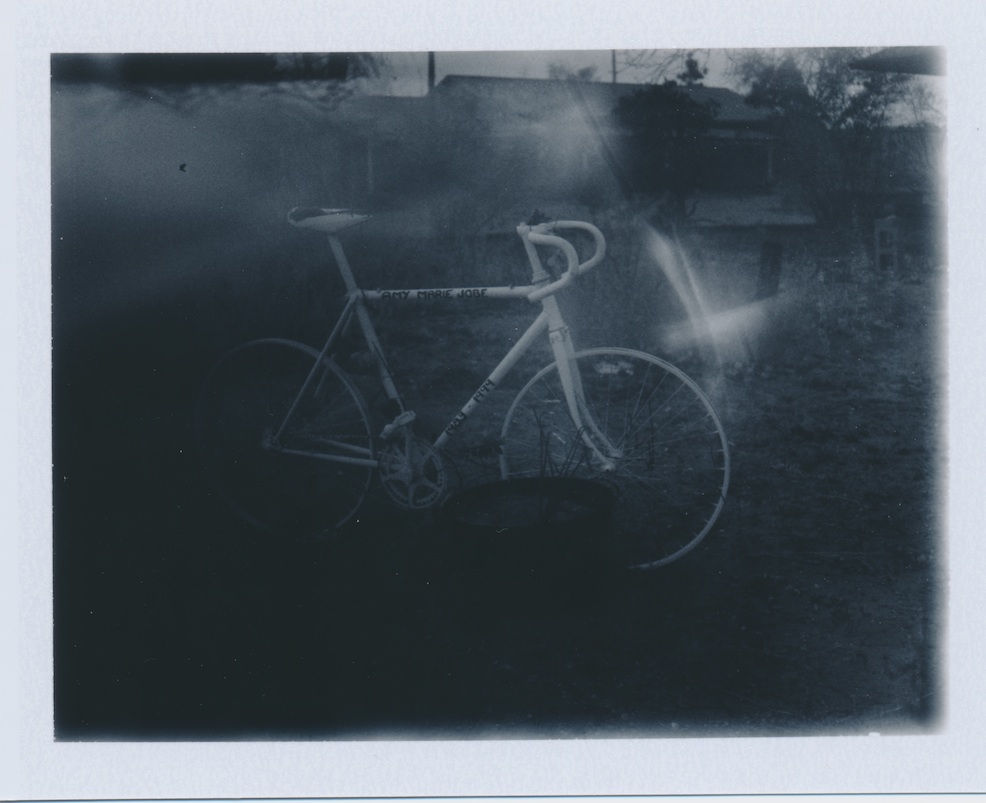 This was an experiment. I used a portrait lens made for a Polaroid 100. I measured the distance since the rangefinder adapter doesn’t fit the 250. It would have been good but I was too close to the electronic flash. My hand and the cat’s butt are properly exposed. 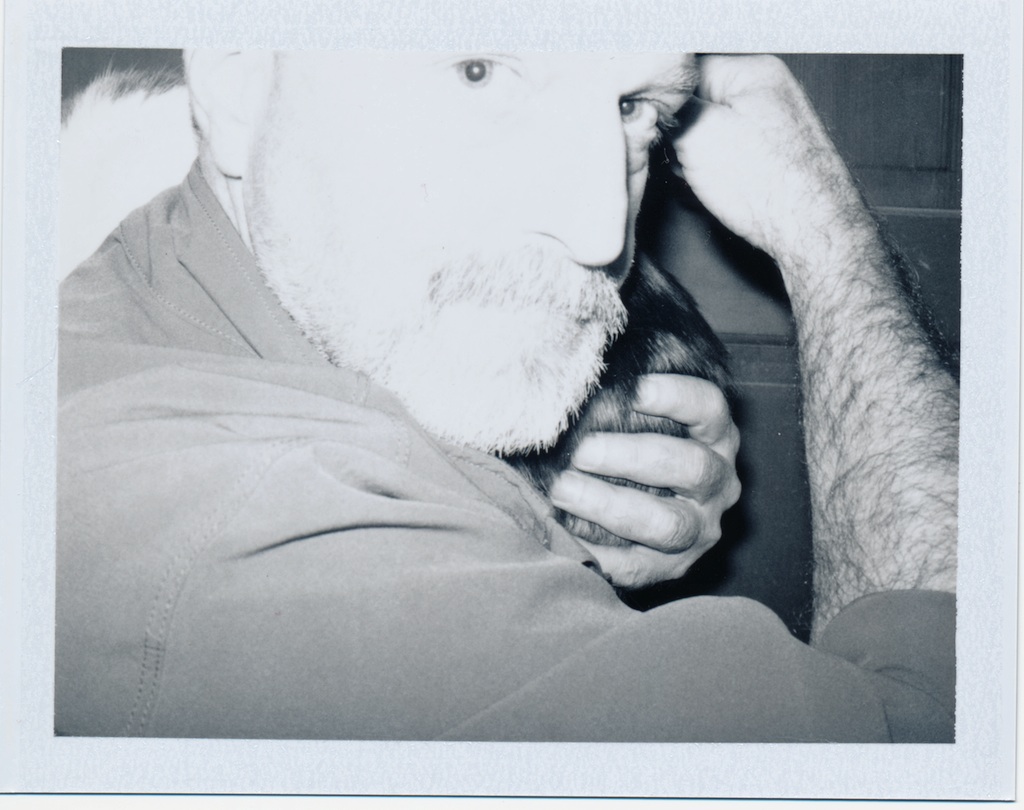 I scanned negatives so I’ll do another post with strange results from that experiment.