… where a man from Kentucky was forced to eat his own beard.

I’m originally from Kentucky and my girlfriend loves to give me grief every time this story resurfaces. She’s a really good writer with a sick sense of humor. A recent email exchange:

Me:
How can I forget?

M:
Just remember, late at night you’ll hear what you think are footsteps. You’ll dismiss it as the cat walking around, turn over, and go back to sleep. Moments later, you’ll get that feeling that someone is watching you. You’ll sit up in bed, look around, and realize no one is there. You’ll try and go back to sleep, but before long, you’ll hear the “snip snip” sound of a small pair of scissors. Cuticle scissors perhaps. The sound comes closer, closer, CLOSER.

You won’t realize what’s happened until you’re coughing up bits of your own beard. You’ll remember your Kentuckian brother, the one who suffered the same fate, and you’ll shed a tear.

I forgot to mention it was known as XE in Japan and XE-1 in Europe. I’ll cover more technical details on the results page.

The first roll (Kodak Max Zoom 800) was mostly a bust. I thought I was helping the camera out using fast film but it was grain city. The first image is the only one from that roll. The flash fired but I was too far away. Boosted the exposure a little and ran noise reduction in Photoshop. 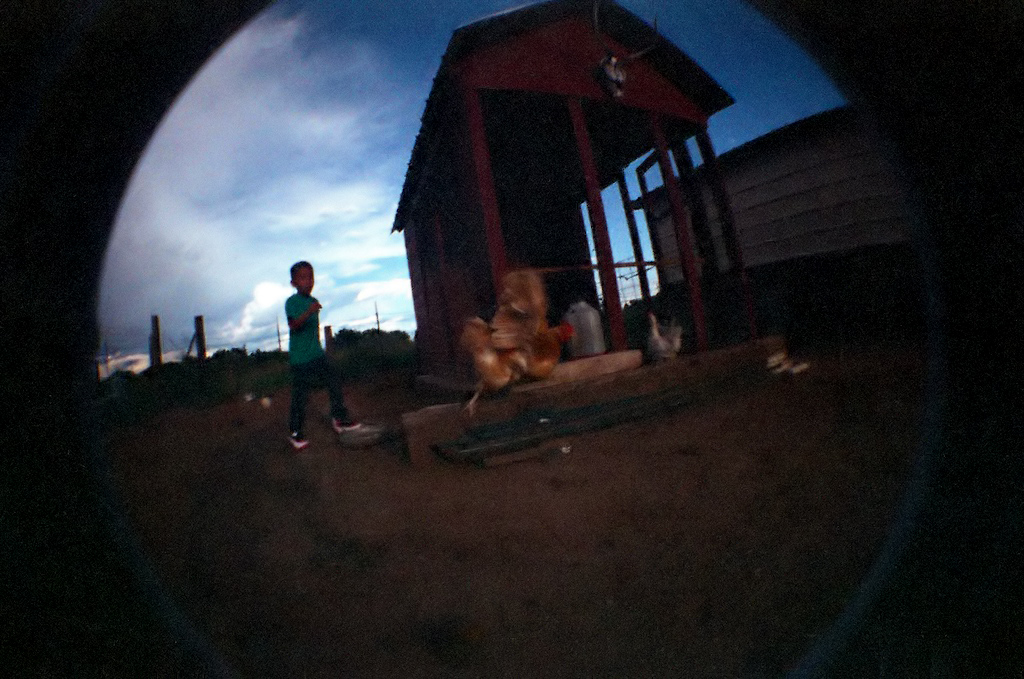 Chicken chasing — one of my favorite sports when I was small. 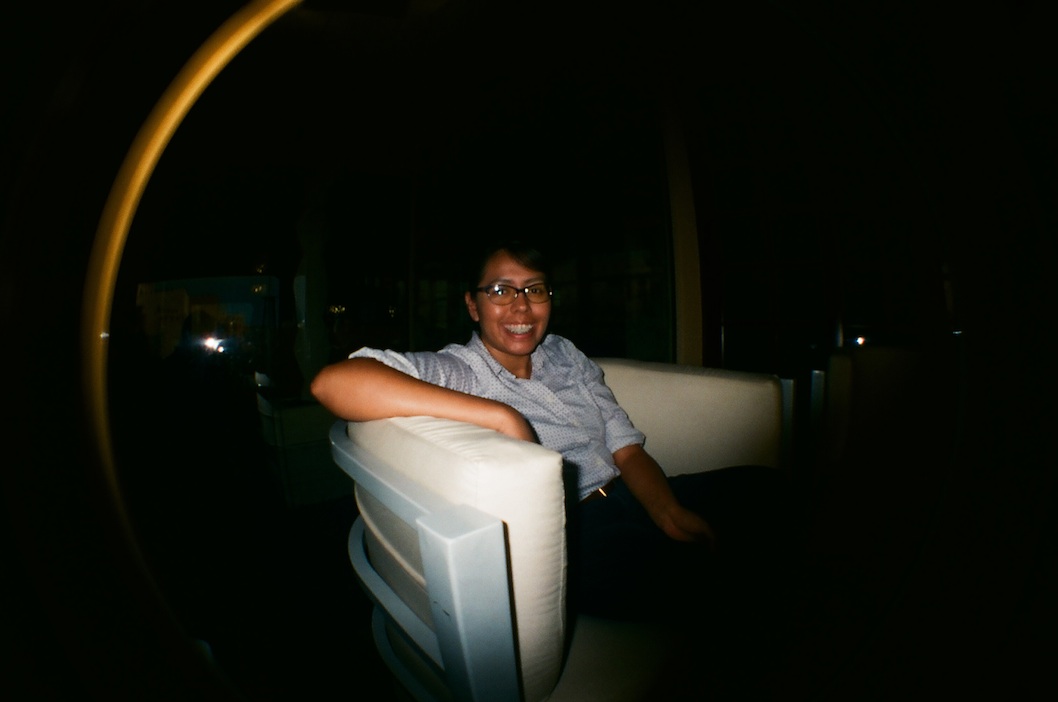 That’s more like it. Not too fisheye-y but almost too far away for the flash. 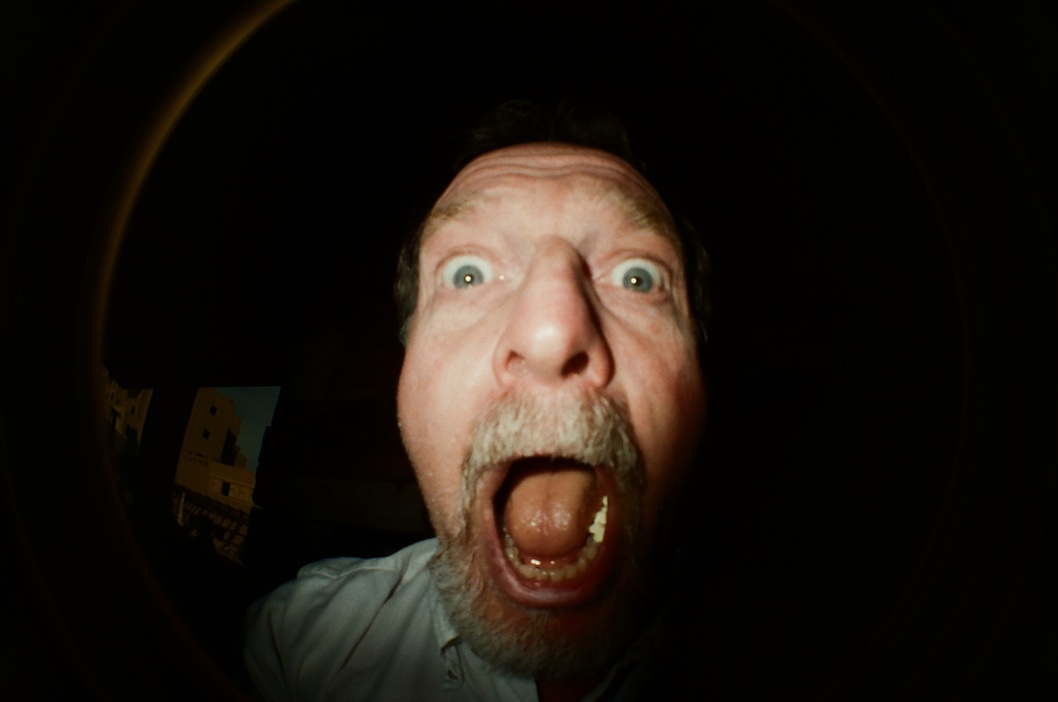 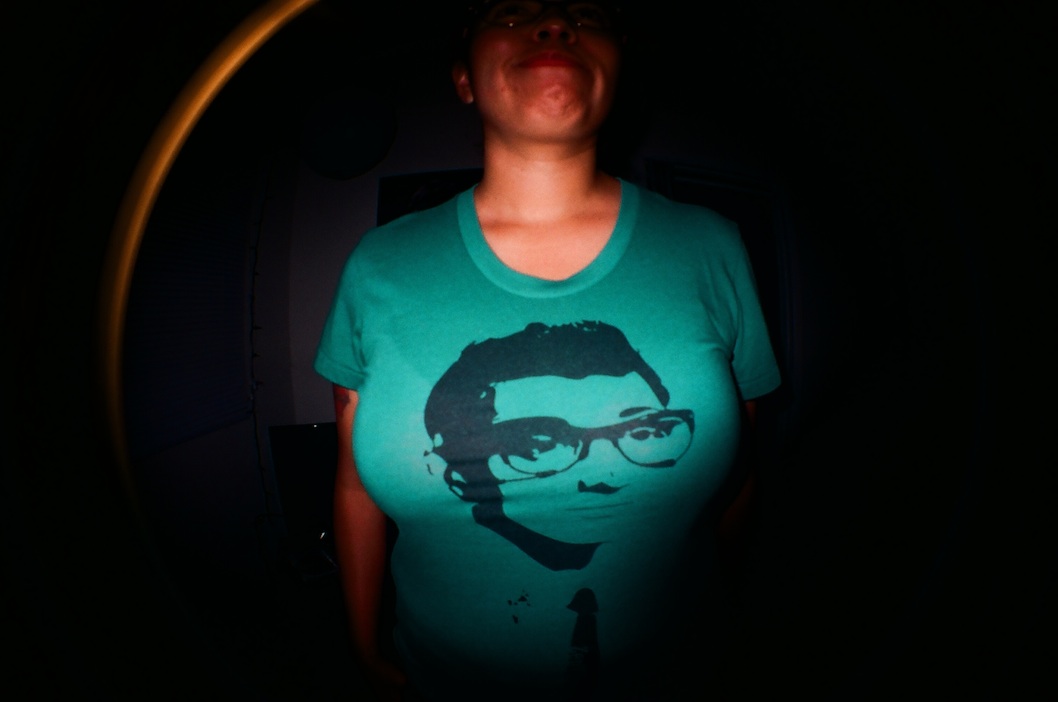 I tease her that her curves make Buddy Holly look like a bug-eyed alien. We had to add fisheye.

Google being Google. Evil. While Youtube chewed on the video, I opened another tab to check mail. Gmail made me authenticate again on the same account. I read some email and logged out. The Youtube page gave me a dialog that I had logged out in another window but it kept uploading. I opened a new tab, logged in again and the video showed processing, then it finished processing and let me publish. I could link to the video, watch the video, and the page said it’s on the 52 Cameras channel, but the video manager showed it as still processing, it didn’t show up in the chronological list of videos on my channel, and the view count wouldn’t increment. WTF? I ended up deleting it and re-uploading.

A little consistency would be nice. If it’s one session, don’t make me authenticate twice. If it’s two sessions, don’t mess up my Youtube connection because I logged out of Gmail.

I’m amazed at how well this camera did. The 1965 film, with a lot of help from the brilliant folks at Visions Photo Lab, turned out some nice images. The wobbly borders are from suspending the 127 film in the scanner’s 120 film holder. I like how the image overlaps the “Kodak Safety Film” edges. The images are oriented correctly — I have no idea why the edge markings are mirror-image. 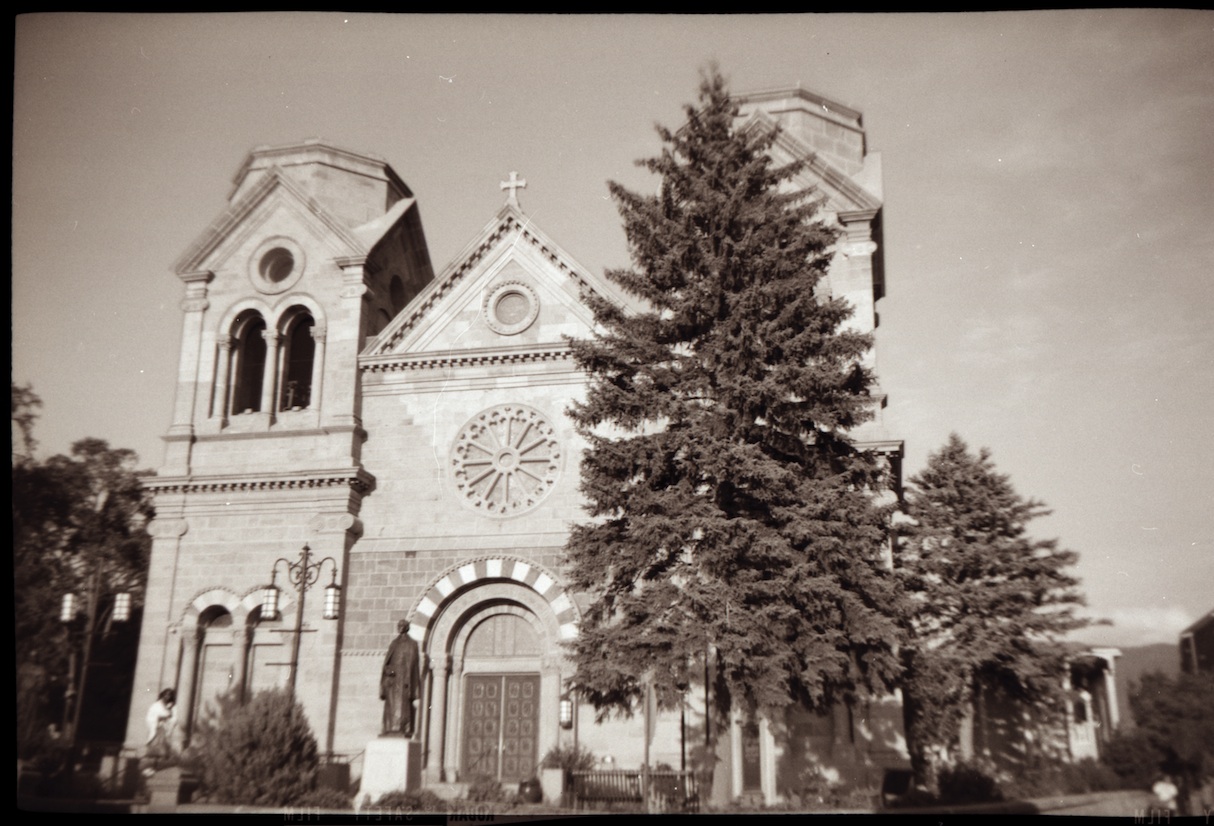 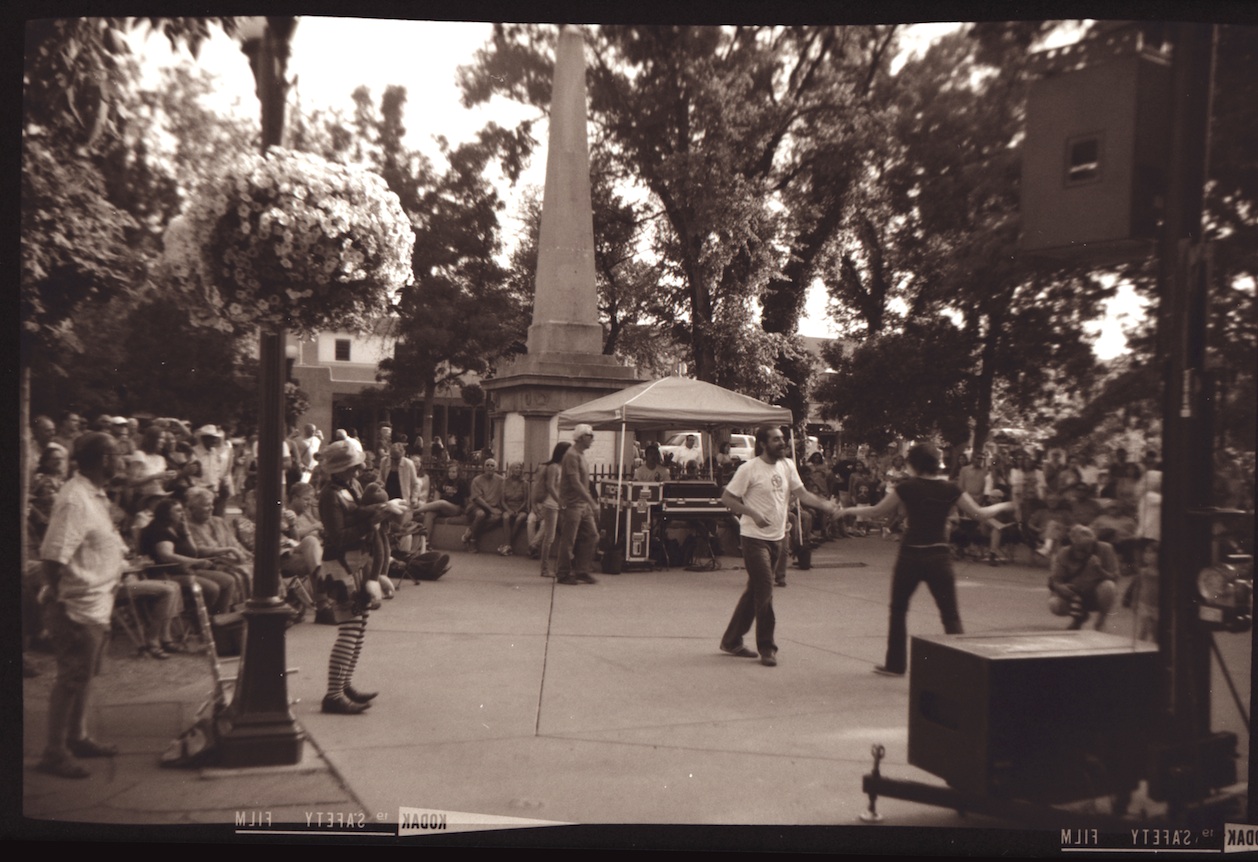 Dancing on the plaza in Santa Fe. 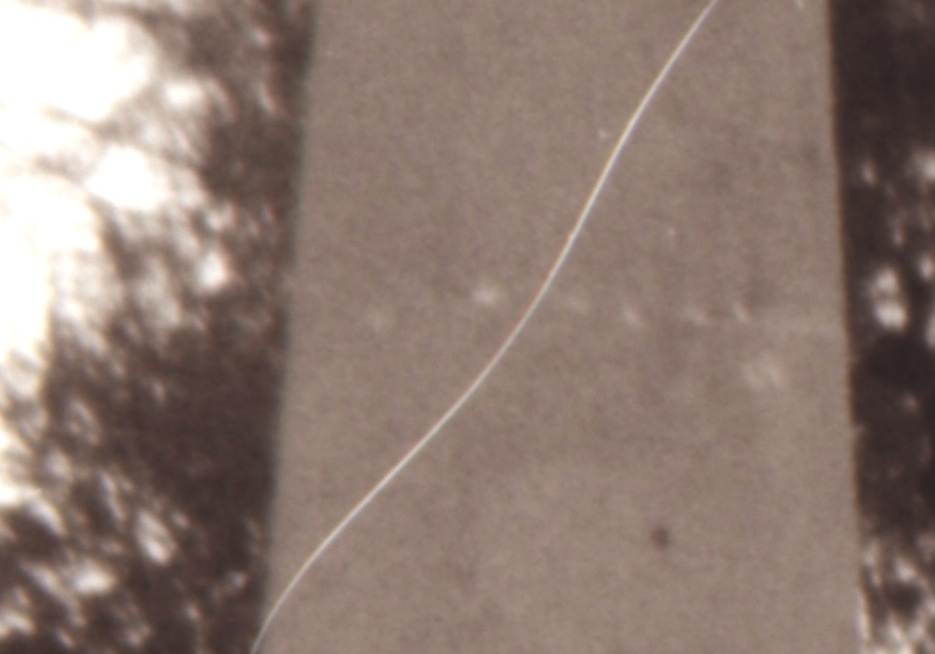 Detail from the above photo before de-fuzz work in Photoshop. Cats love to help you scan. 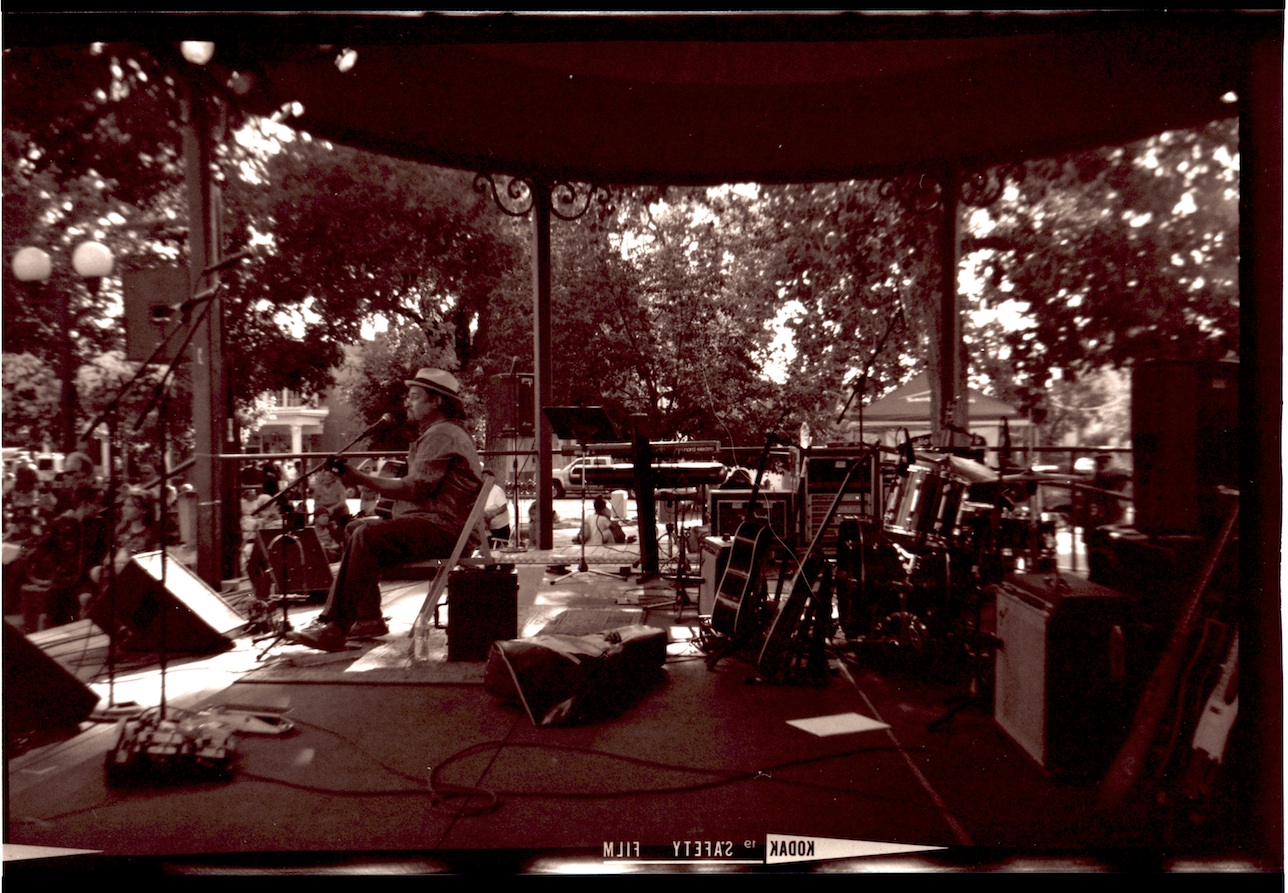 Have to have music to dance. 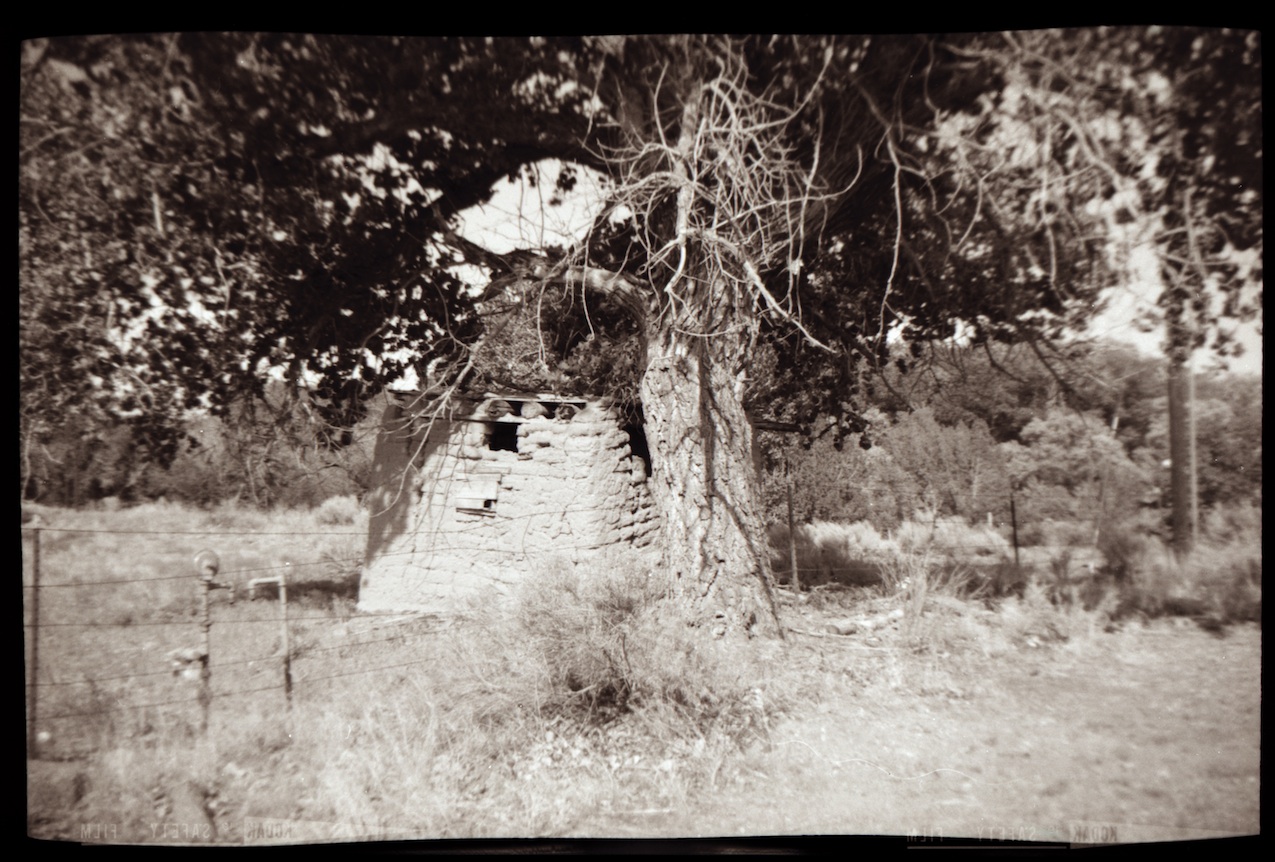 OK, not quite “extinct”. Blue Moon has 127 film. I haven’t tried it yet but I’ve read good things about it.

Ha! When I’m loaded with film, I usually don’t actually take a picture of the video camera. Processing and scanning by The Camera Shop of Santa Fe.

The film was a pleasant surprise. It’s black and white. I searched around and the best guesses seem to be that it’s an Ilford clone or actual Ilford taken out of single use cameras. I lean toward the latter since most disposables get 27 shots. They’re loaded in the dark so no frames are lost to the leader. 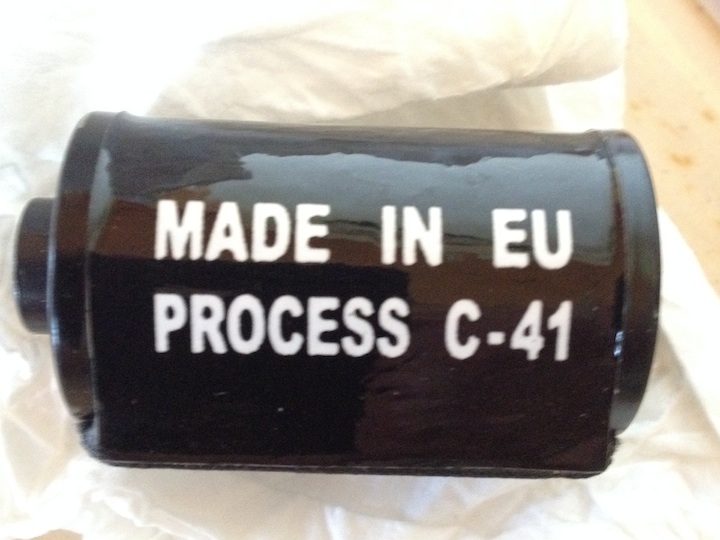 The backwards frame numbering is another clue that it’s film from a disposable camera. Since a rewind mechanism isn’t needed, most disposables reel the film into the canister as you advance. 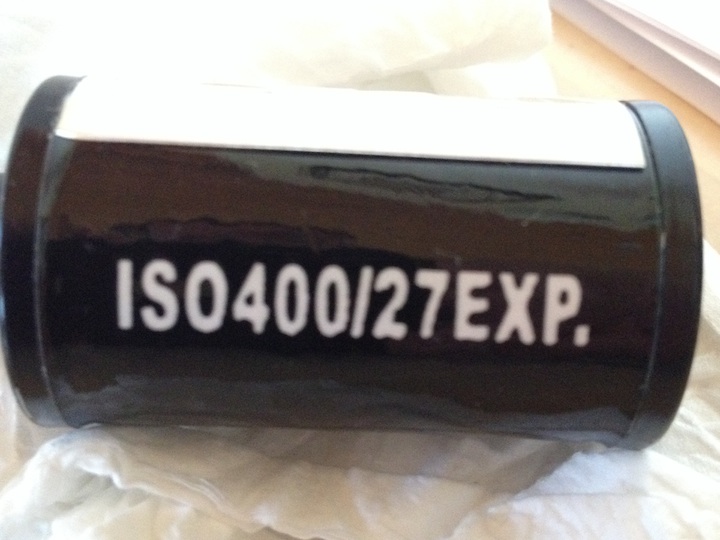 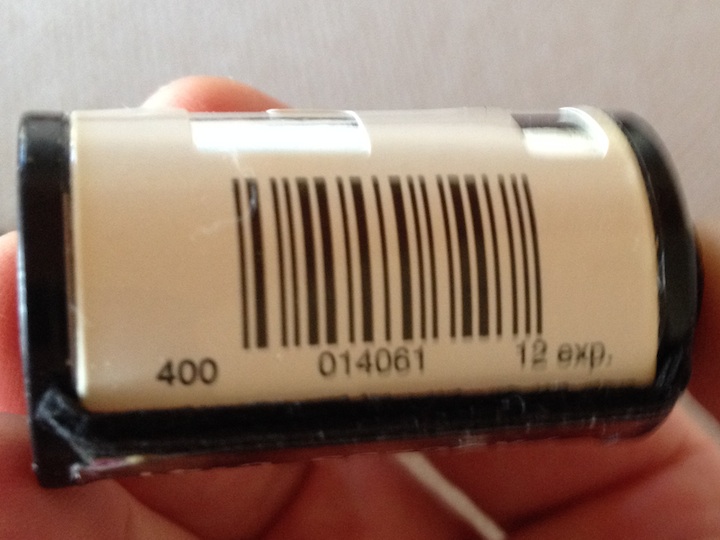 I think the sticker was reused to get the DX code.

Mixed reviews on line but the roll I got is beautiful. There are magenta and slate tints; easy enough to correct but I like them the way they are.

Even after mentioning it in the video, I had the camera set to ISO 100 for the photo at the co-op. I checked photos of film on my phone, looked at the one I used last week, and shot the rest with the camera at ISO 200. Whatever the film is, it’s pretty forgiving.

Enough about that. On to the camera!

F/5.6 at 1/1000-ish. I set the aperture and rotated the shutter dial until the meter said it was a hair under. I really need to be better about writing this stuff down. 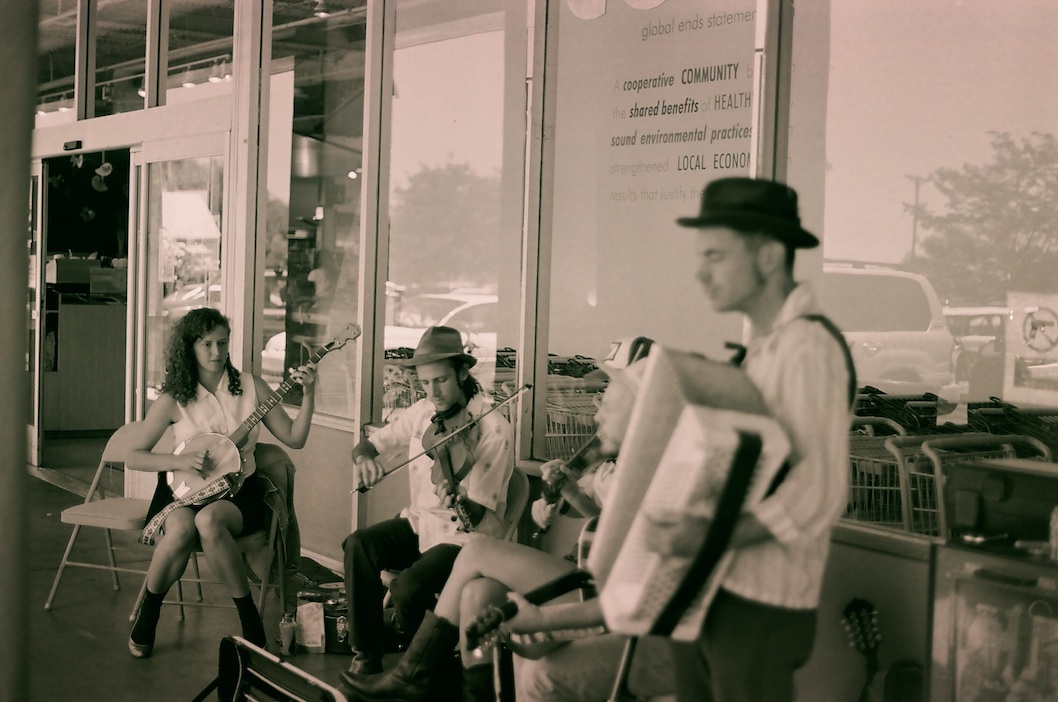 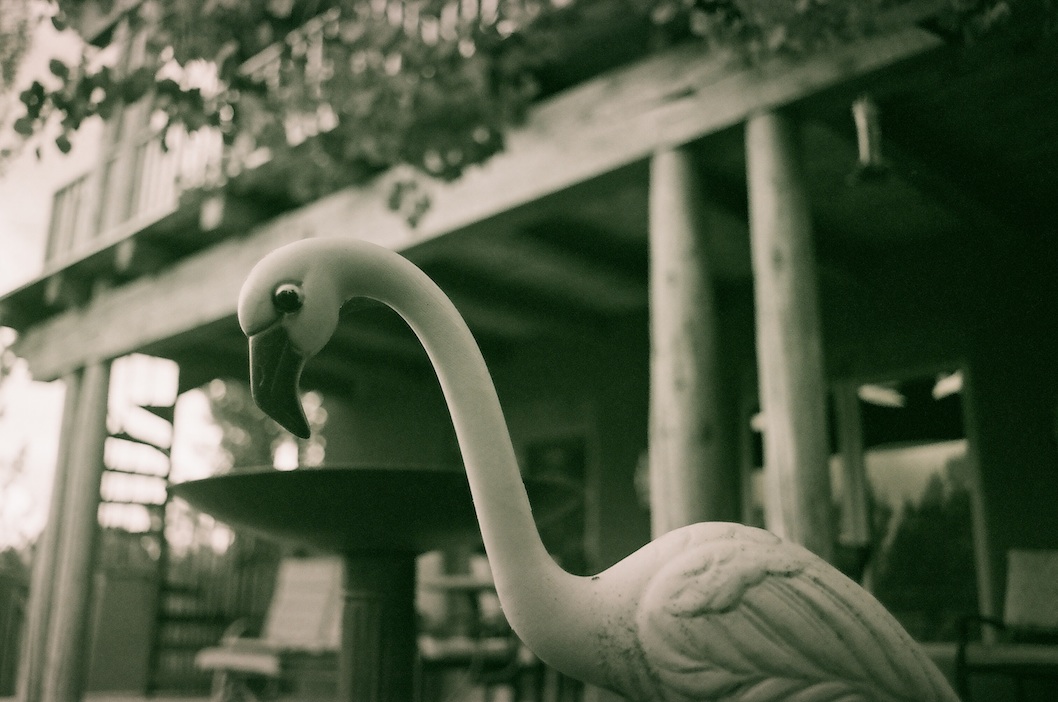 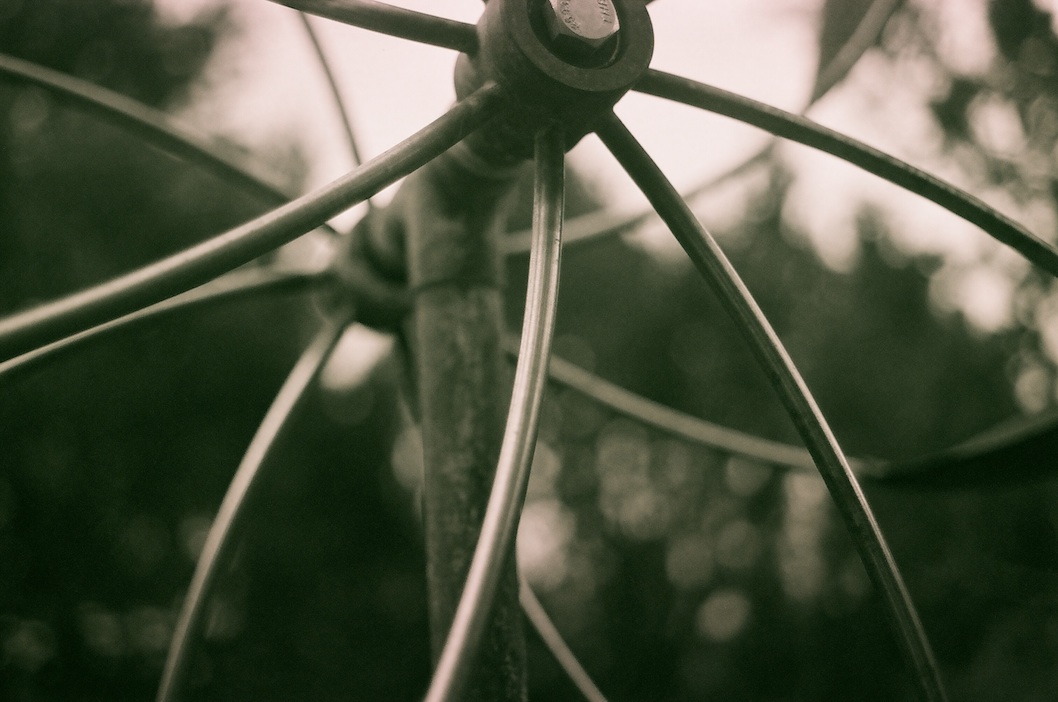 Is reflected depth, depth, or a flat plane of light near the camera? I couldn’t remember for sure but guessed the latter. 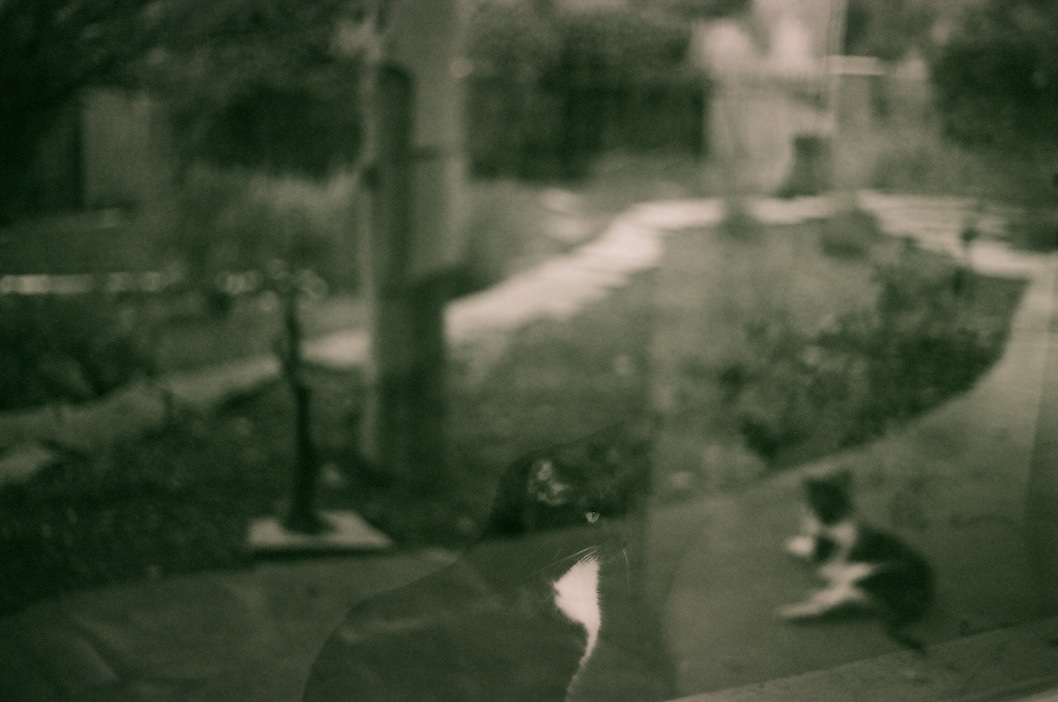 Update: Of course, I guessed wrong. You can tell by the OoF background. It’s a better picture for not having done what I was trying to do. Dumb luck — I’ll take it!

The Physics Classroom is a nice refresher for those of us who had Physics 101 a long time ago. 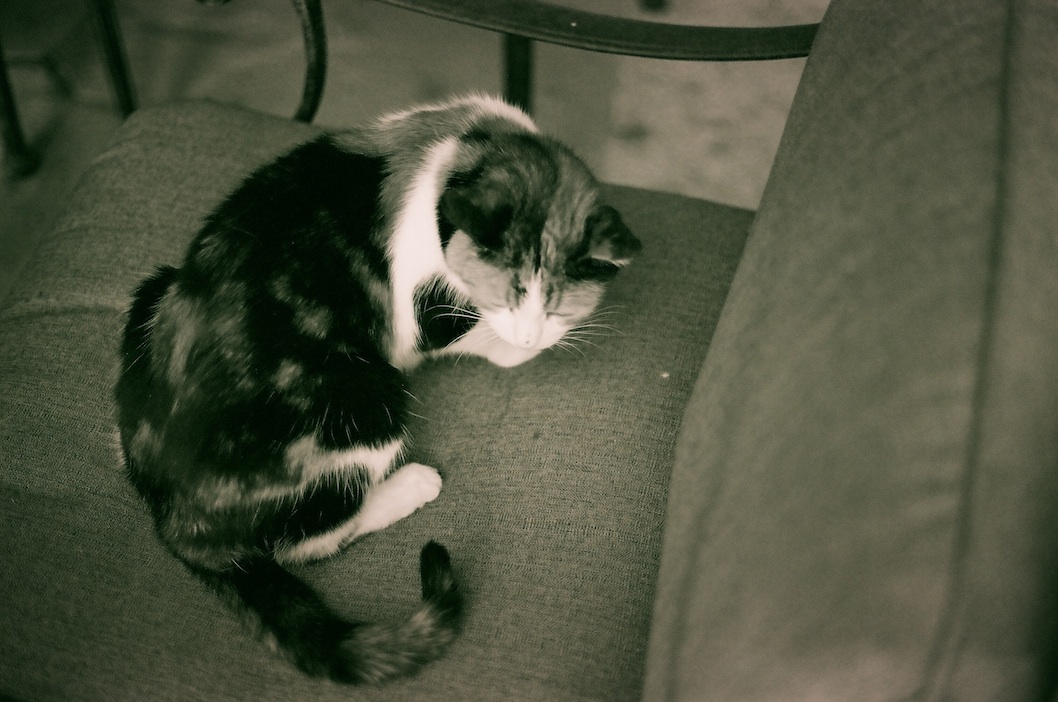 Another extraordinary camera. I really need to stop falling in love or I’ll need another house just for cameras. Life intruded, as life does, so I’ve only shot one roll though it.

“Return to SAM’S CLUB for Quality Film Developing” Fujicolor SUPER HQ 200. I got it in the film can with no packaging so I have no idea of its expiration. Processing and scanning by The Camera Shop of Santa Fe. 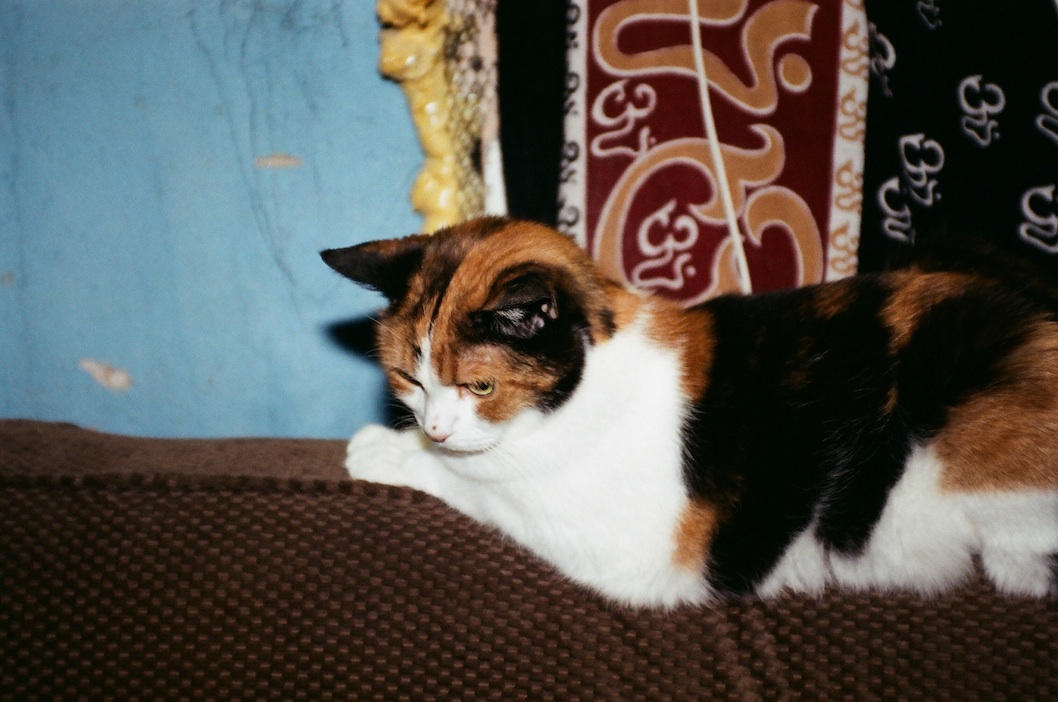 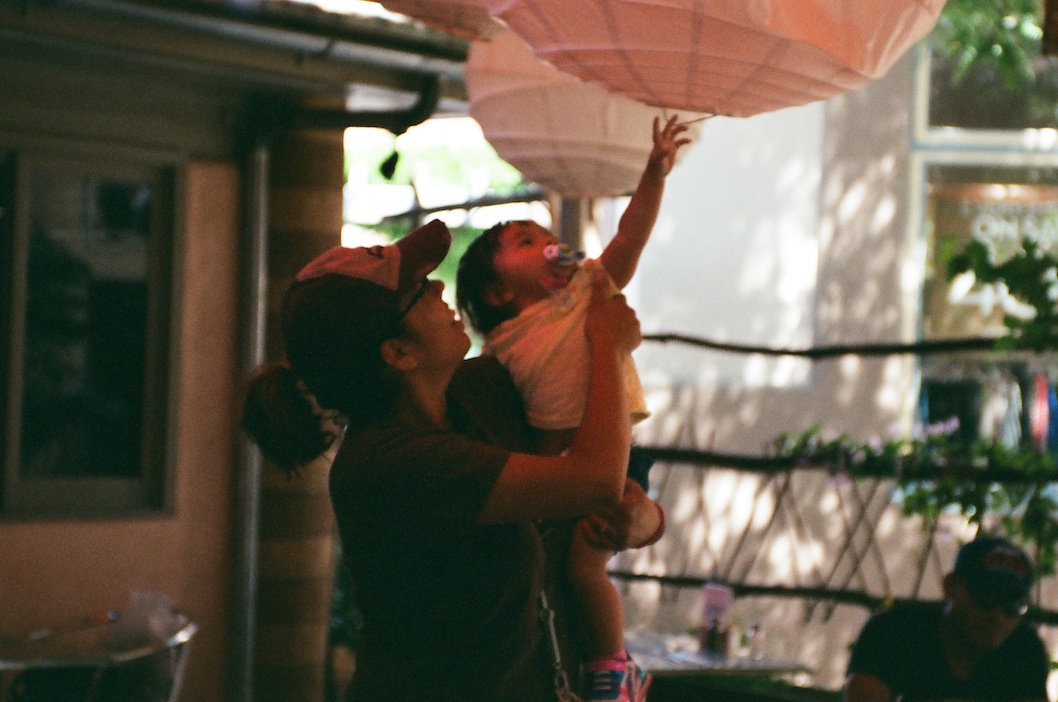 In the shade under an orange-ish tarp. Program autoexposure. 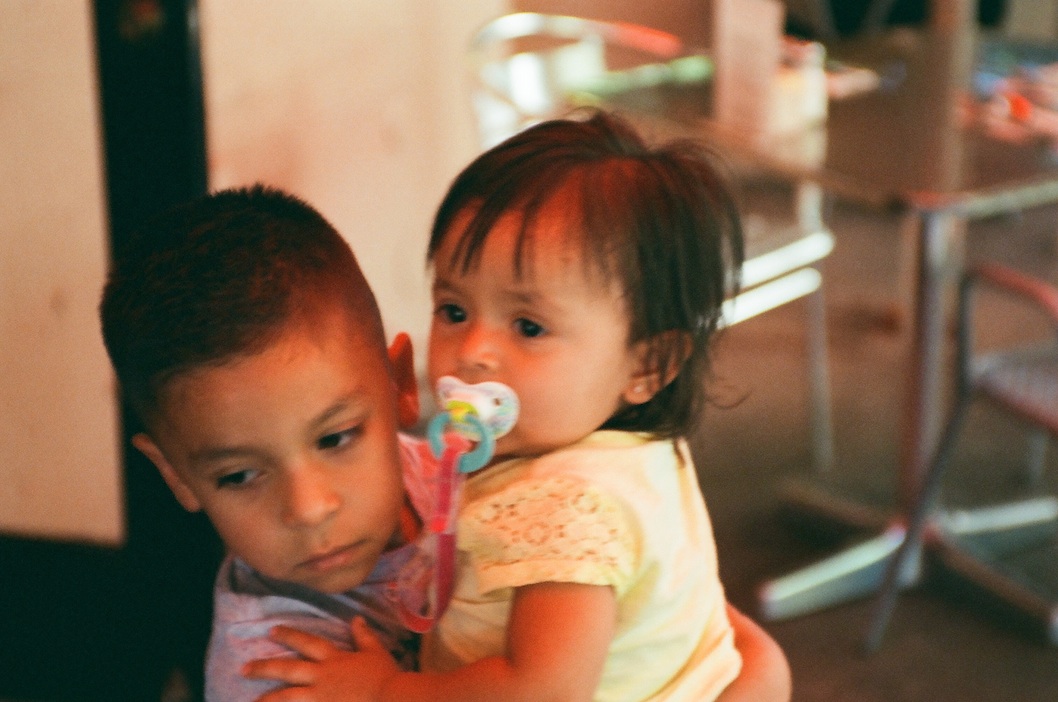 The orange hue and a slight miss with the autofocus actually makes this picture better. Program AE. 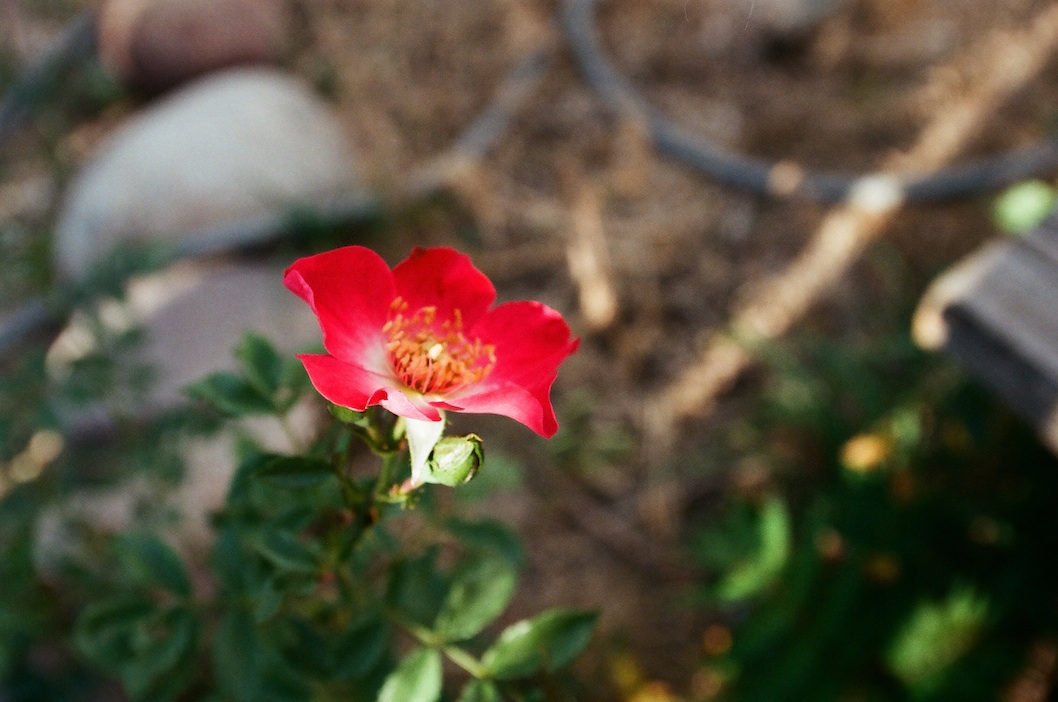 When you select “macro” on the lens, you focus with the zoom ring. Program AE.

I really want to get the 50mm f/1.7 lens and shoot some more. Because it works with modern Sony Alpha cameras, the 50 is in demand and priced accordingly, although not exorbitantly so.