Sadly, the sensor kept getting worse. The camera rarely powers up working now. A pretty good time to wrap it up and post some results.

All of the IR photos are ISO 100, f/2, and 1/60 second. I chose a low ISO to keep noise down and the f-stop and shutter are the camera settings in “Night Shot”. 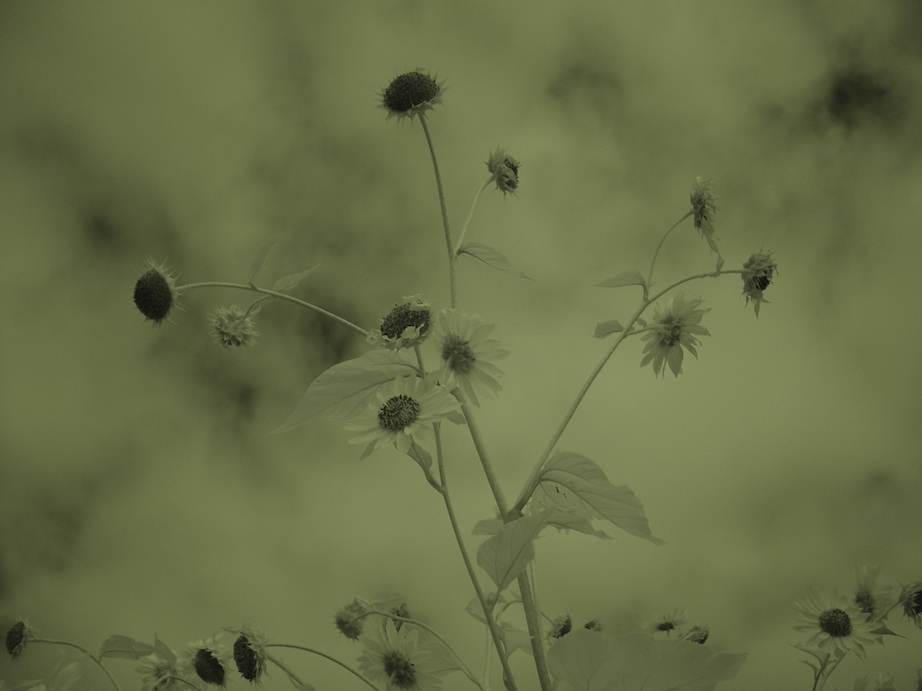 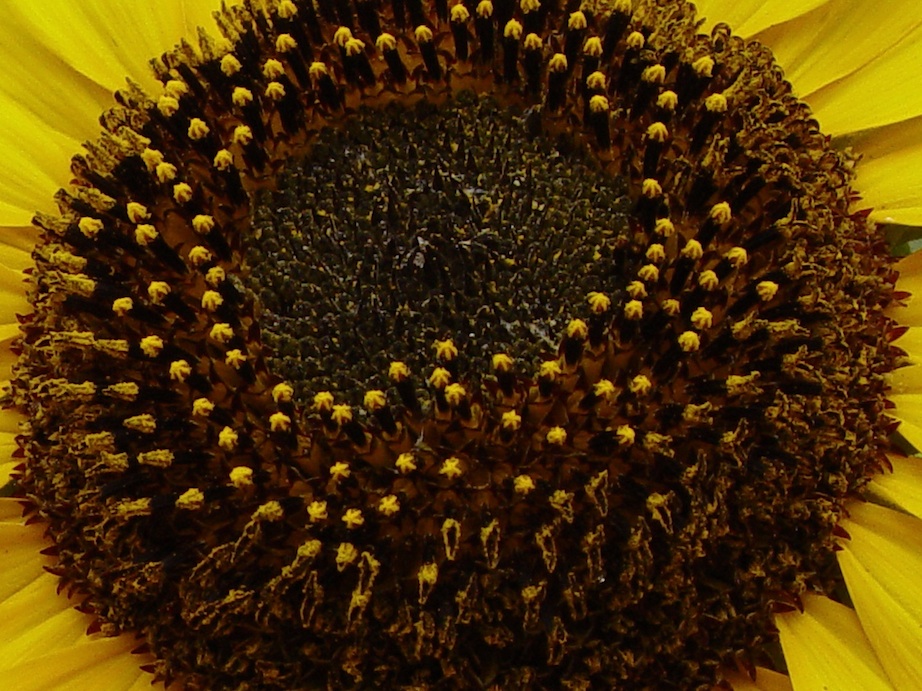 Oops, left the camera in macro and they were too far away. I had to sharpen again. 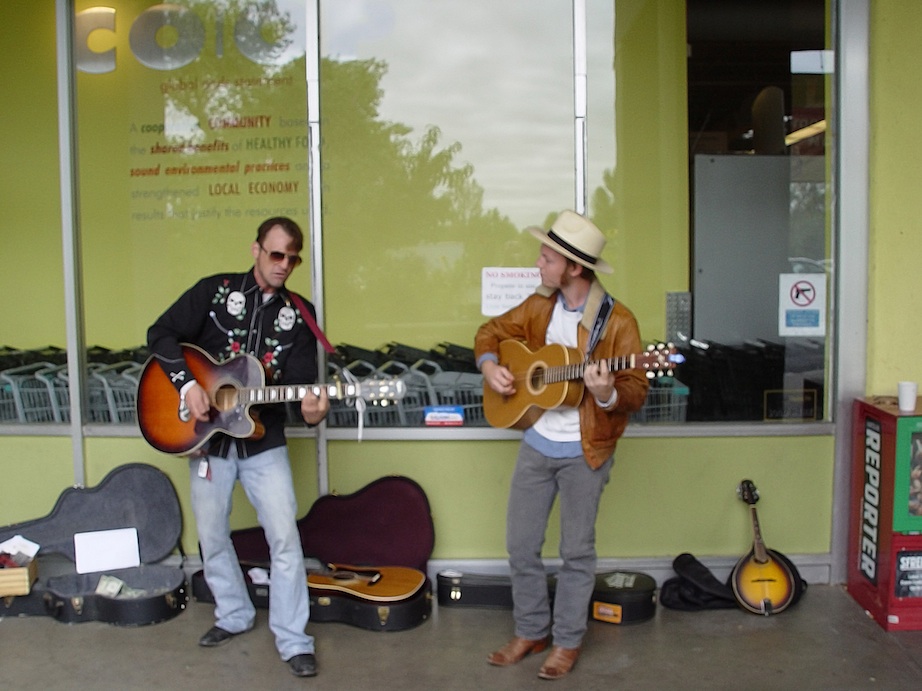 IR does strange things with eyes. Hers are dark brown and look blue. Mine are blue and come out black. 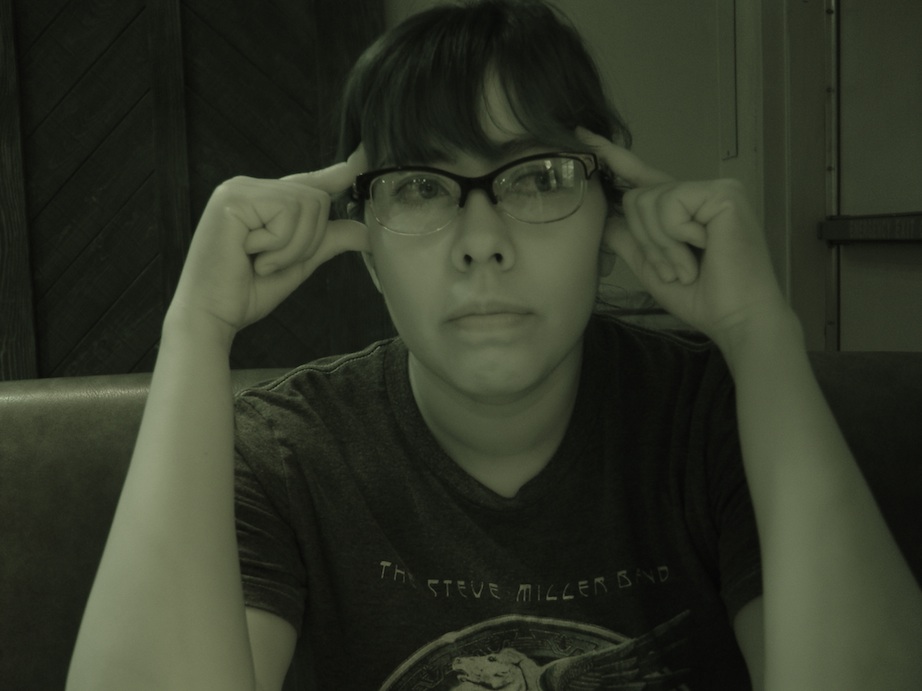 I love the luminous quality of skin in infrared. 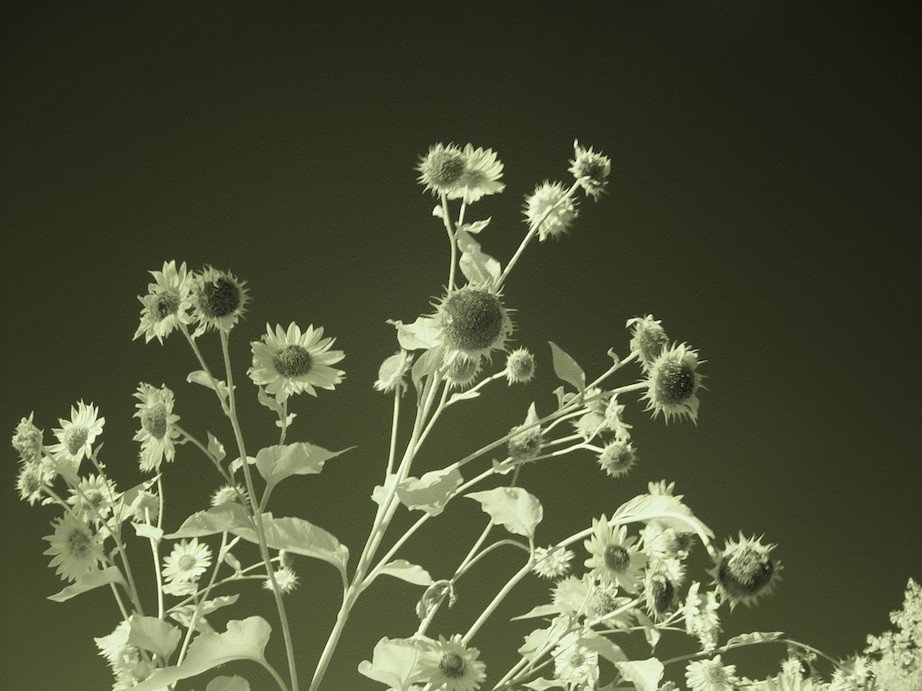 One of my favorites. The clouds cleared so the white leaves and petals pop against the sky. 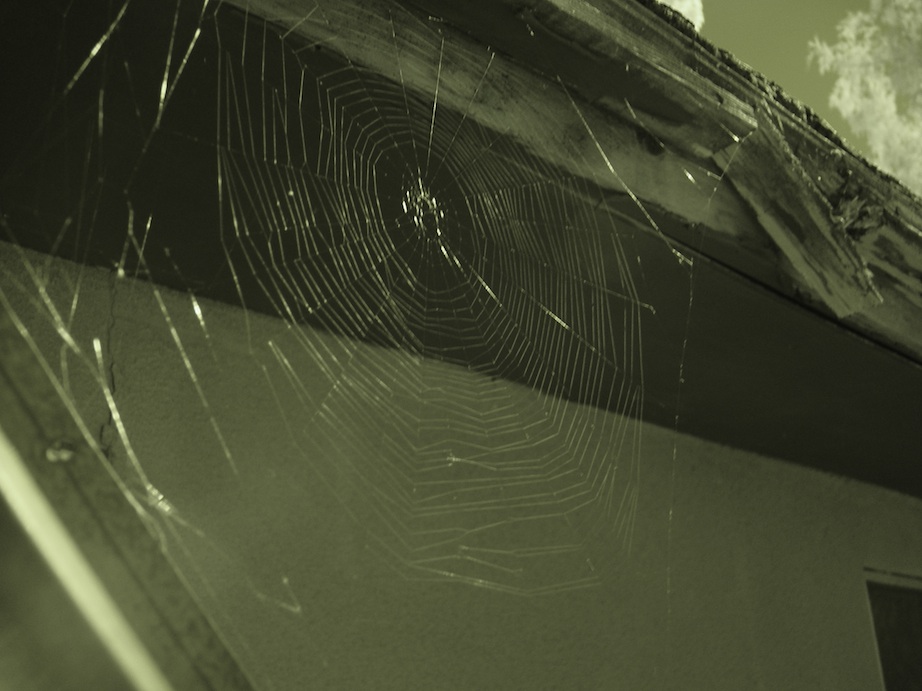 Spider web at the new casa.

When I get the new sensor, I’ll post about the repair.

Flex the cartridge a few times to crack the seams. 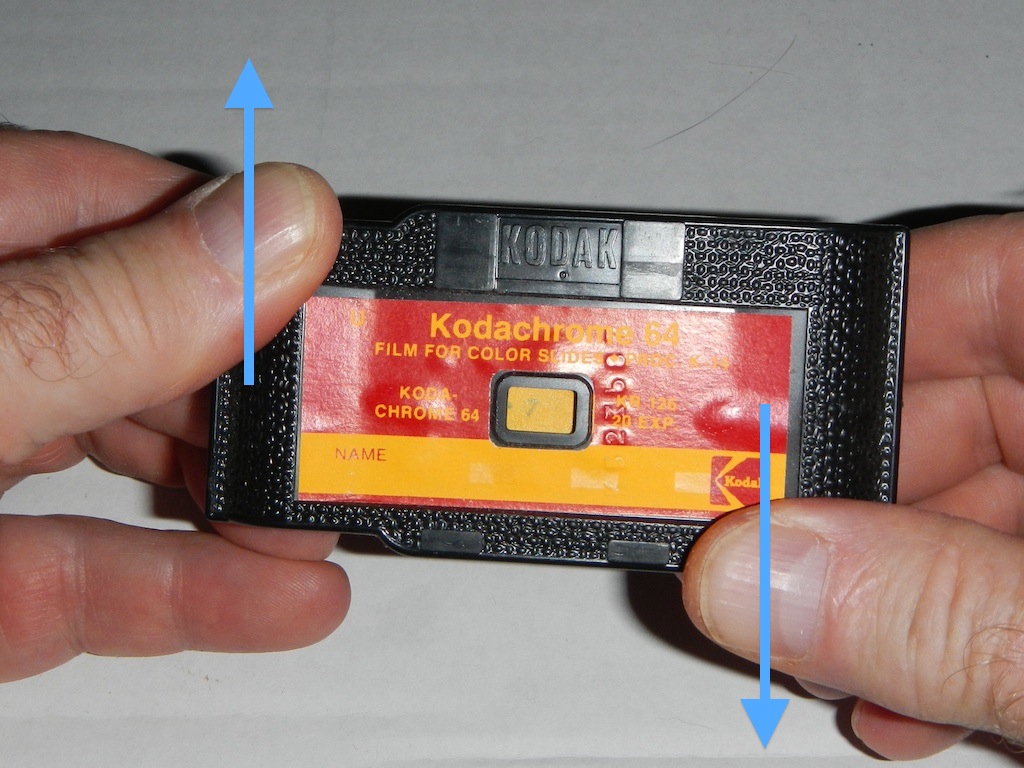 To get the thing started flex in one direction…

… and then the other.

Most of the edges come apart pretty easily but there are some “welds”. The top (label right side up) is the hardest part. The back (label side) overlaps the inside by about 5mm and there is a glue weld inside the overlap. You might get lucky, you might have to use a knife or razor blade, or, like my first one, you might mangle it. It’s still usable, I just have to use more tape to seal it. 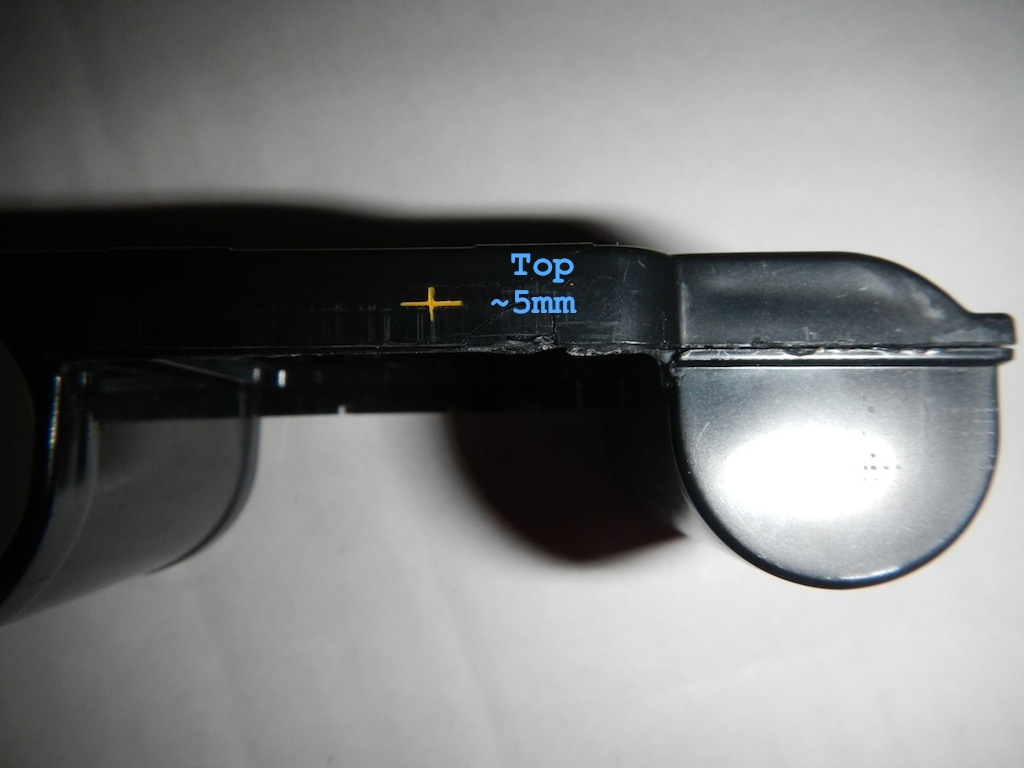 Most of the cartridges I have are marked where the glue has melted the seams together. 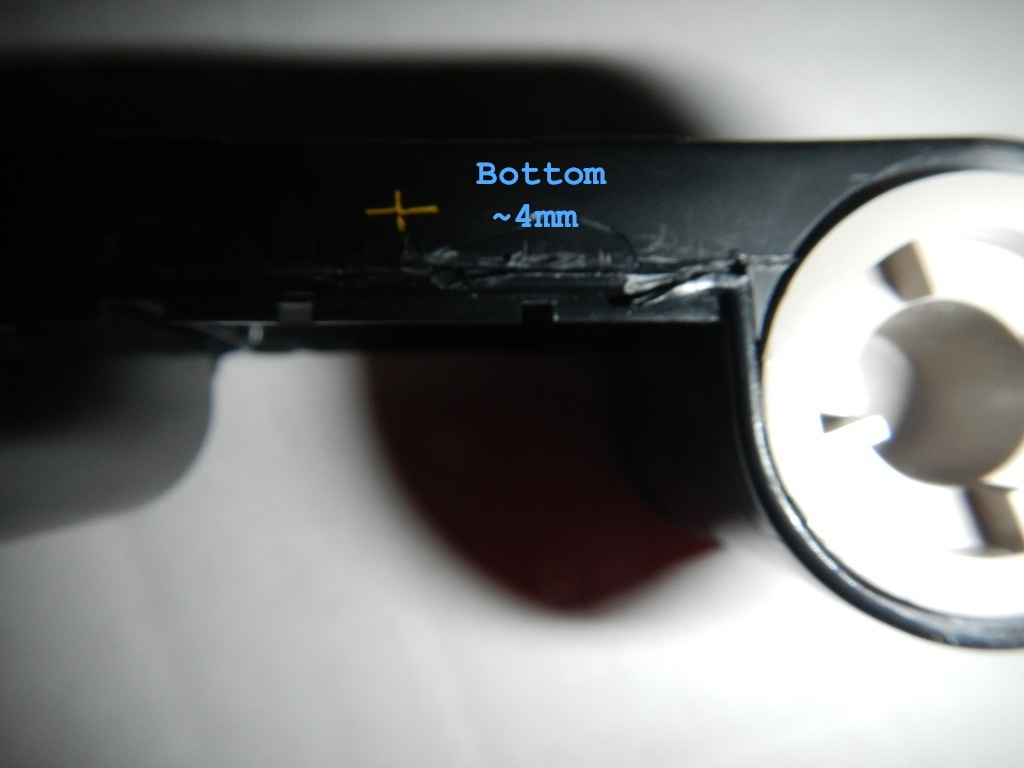 The bottom has less overlap but it’s glued inside as well. 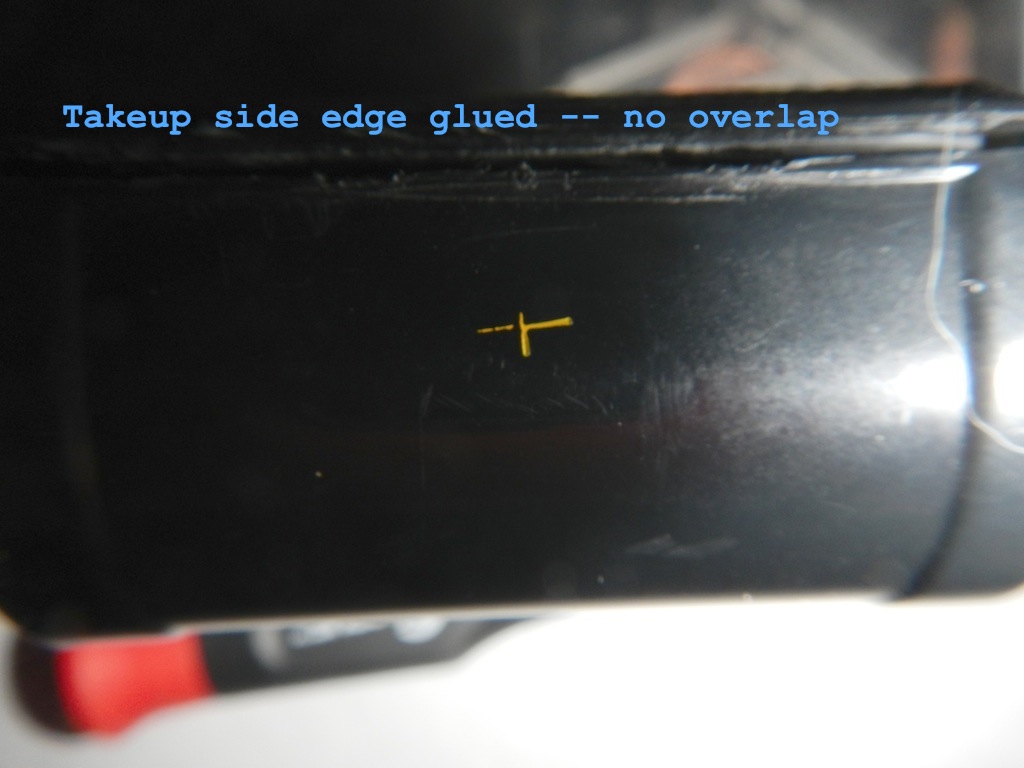 The take-up spool side is edge glued and came apart pretty cleanly (note the cat hair from my curious assistant). 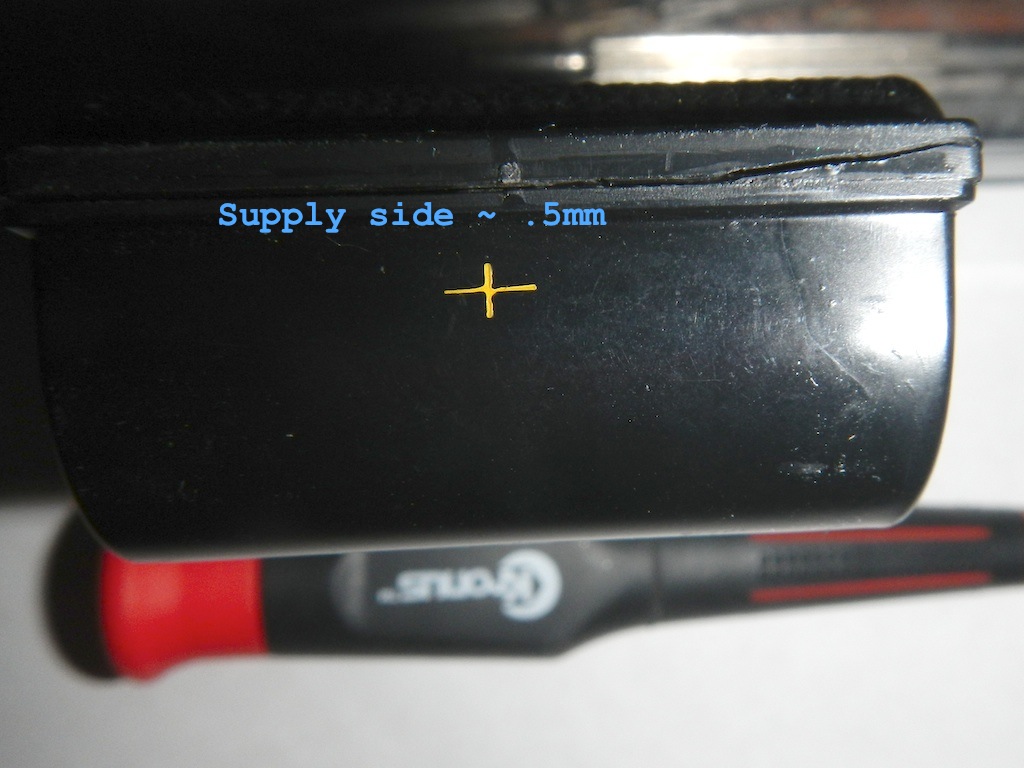 The supply side has a very small overlap and mostly came apart. The crooked part is where I tried to get a razor blade in the seam.

The old film will be really curly. I saved it for testing frame spacing and used a piece of the paper as fixed film backing. 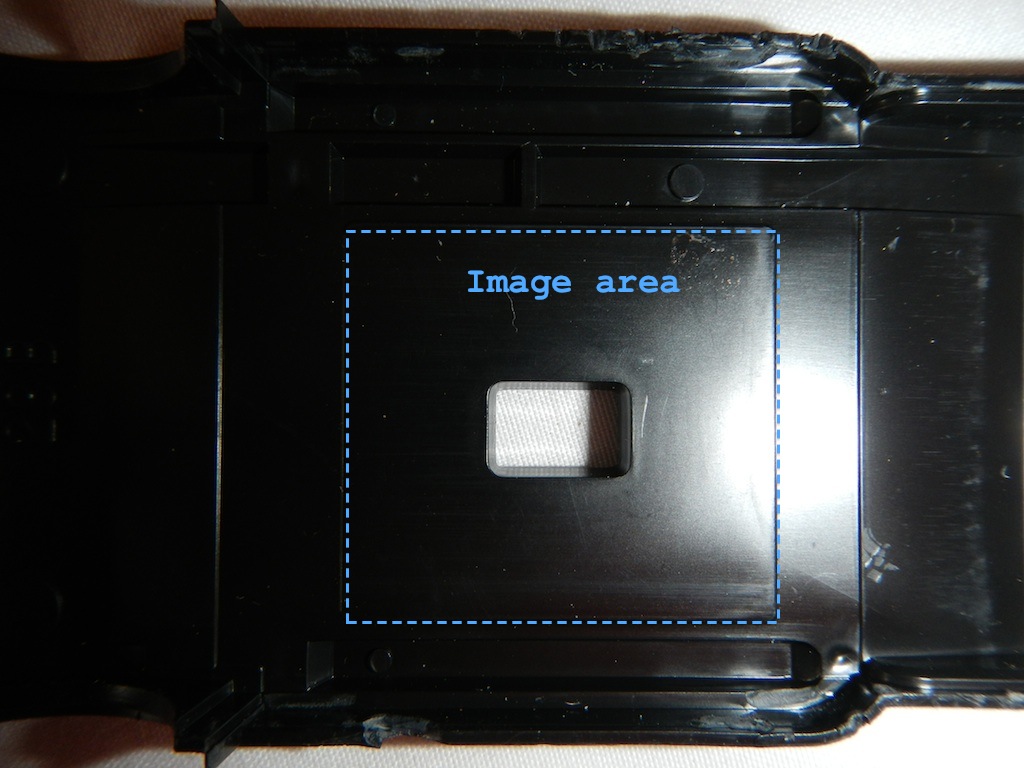 The image area is well defined. The film will be a little too far from the lens unless…

Most of the articles I’ve read skip this part. You can go without but the focus will be a little off. A lot of Instamatics had pretty soft focus from cheap plastic lenses. It depends — do you want to embrace the Lomo-style effects or try to take a “good” photograph? 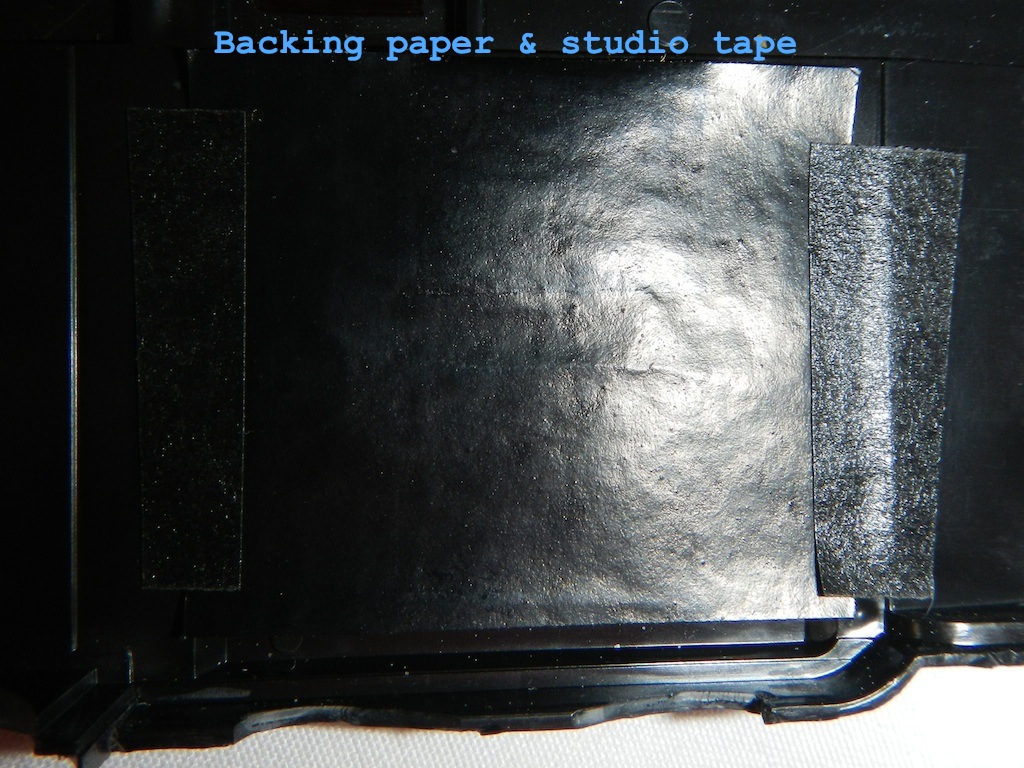 … you use some backing paper. This is vintage 126 paper but you can cut down 120 backing paper or use anything black that’s the right thickness.

After smoothing the tape and giving the cartridge a good dusting, it’s time to get things ready to go into the dark. I use a changing bag but anywhere you can work in total darkness is fine. 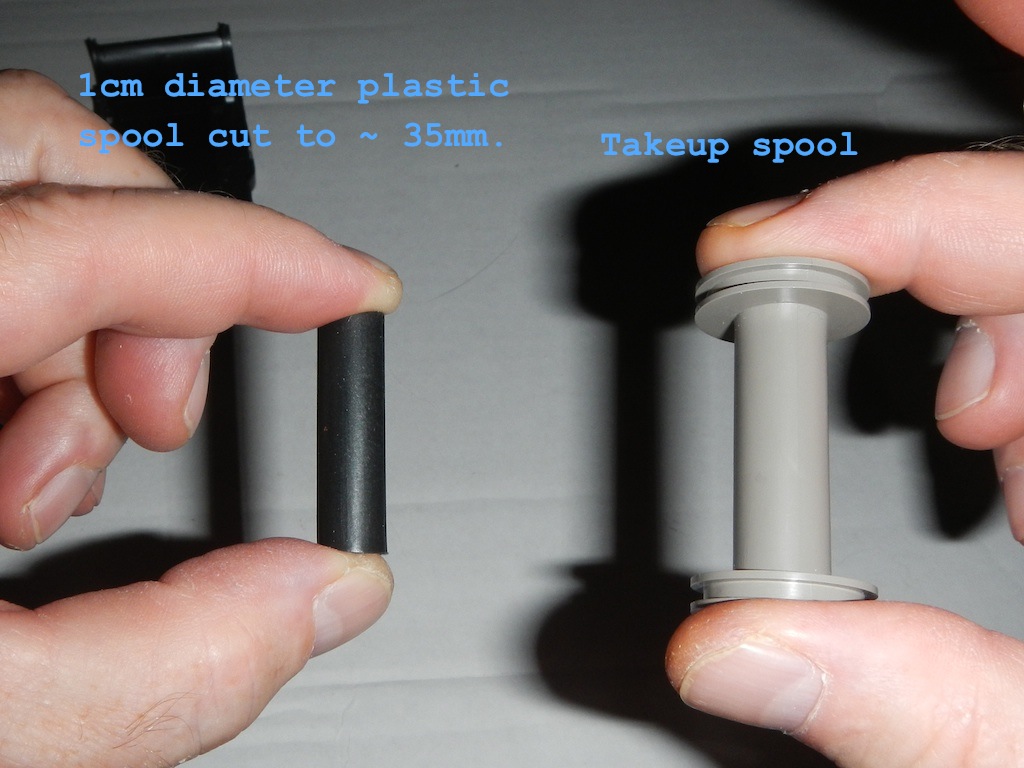 The small spool is from a roll of dog poo bags.

I haven’t seen other articles where the supply side was put onto a spool. It made it a lot easier for me to get it rolled properly. 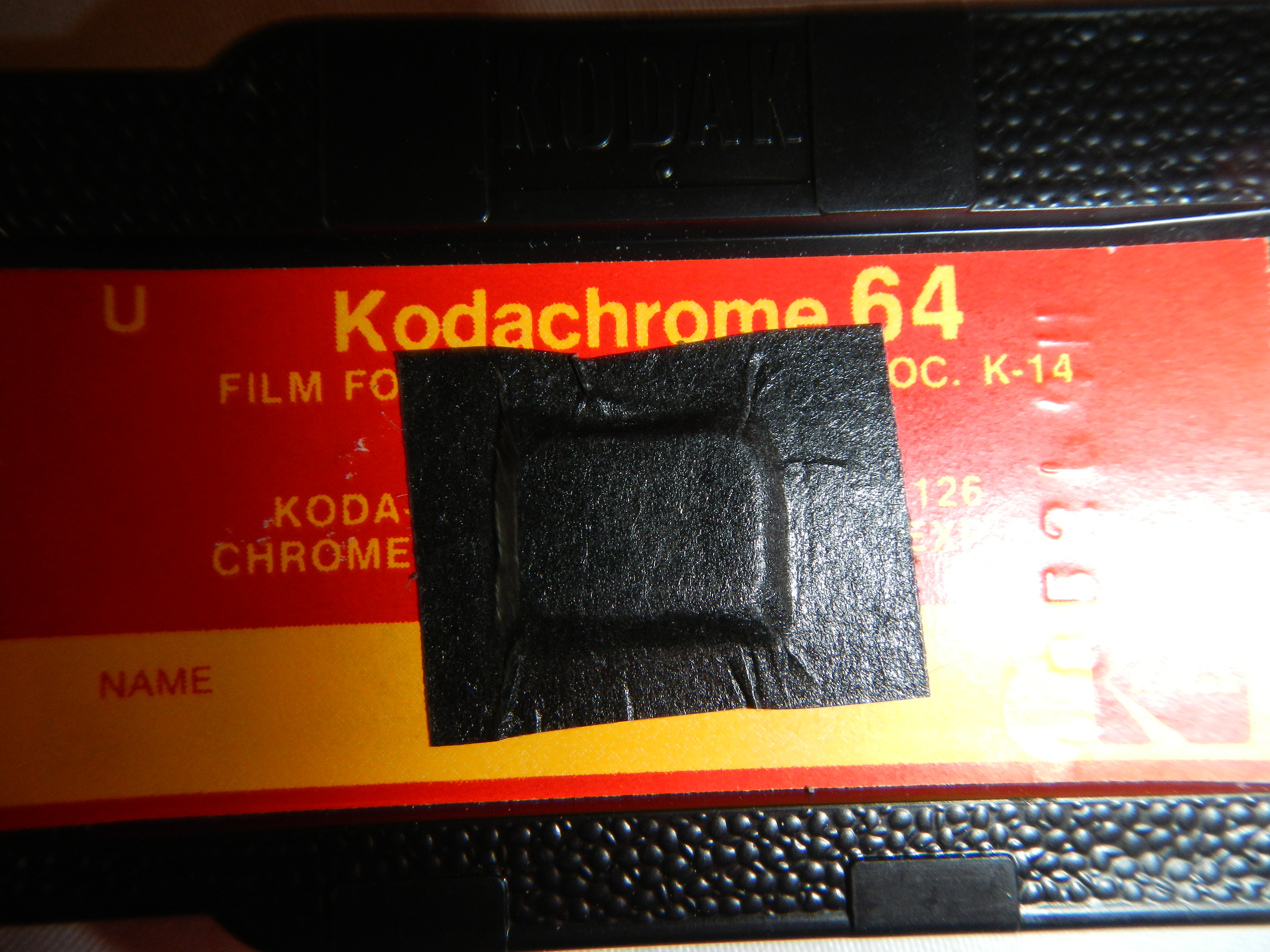 Tape the film count window on the cartridge and the camera.

Go slow, turn off your phone, and give the cat some snacks. You want to be able to do this by feel without distraction.

The in-the-dark sequence from my written notes:

I decided to cut the 35mm leader in the bag so I could pull enough to make it easy to tape to the supply spool without exposing a couple of frames. The tape pieces were pre-measured for taping to the spools and holding the ends of the cartridge together. I felt for the short spool pieces and went left to right along the ruler so I got the right piece for each step. Because the cartridge was somewhat mangled, I decided to tape the camera back light-tight instead. The top and bottom edges of the cartridge would be a pretty precise tape job in the dark bag.

After pulling the camera out of the bag, I used more studio tape on the seams of the camera back.

I’ll do another, shorter, post about actually using this kludge in the camera.

This is the end-ish of the 52 Cameras Project. I’ll still be posting but I won’t hold to anything near a camera a week. A lot of cameras need TLC, I have a documentary photography class coming up in October, and a lot of projects need a push to get into production.

Not bad for a camera that was low-end 37 years ago. I’ll do a post about reloading 35mm film into a 126 cartridge later. I only had time to use the 35mm adapter in the scanner. The image overlaps the lower sprocket holes on 35mm film.

Scanned with the CanoScan 9000f at 4800 DPI using Image Capture.app and resized to 15% for upload. No idea why, but the Canon software overexposed everything. 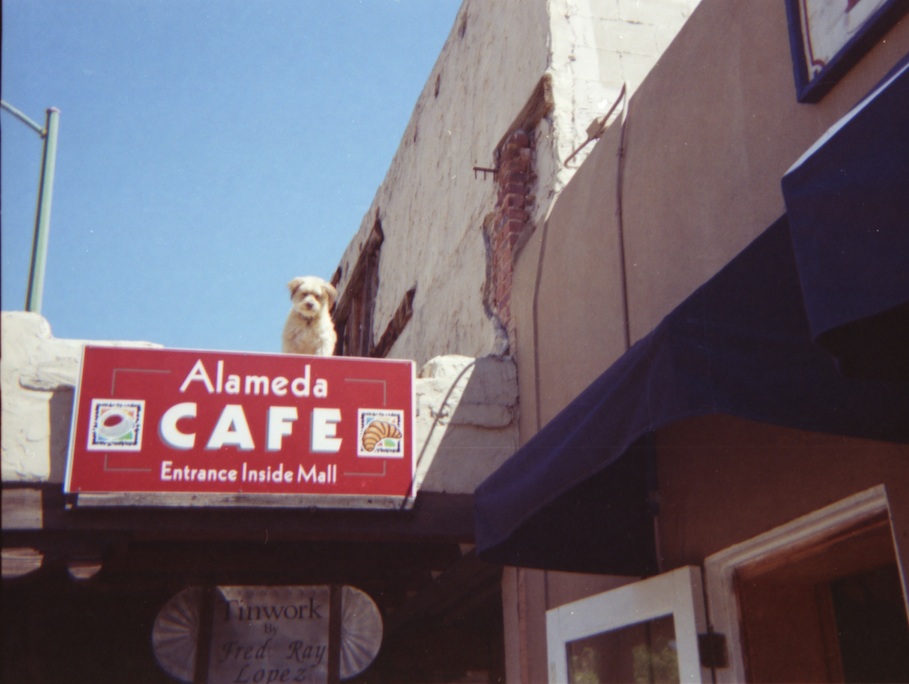 Walking downtown we heard a dog barking. Who thinks to look UP when a dog barks? 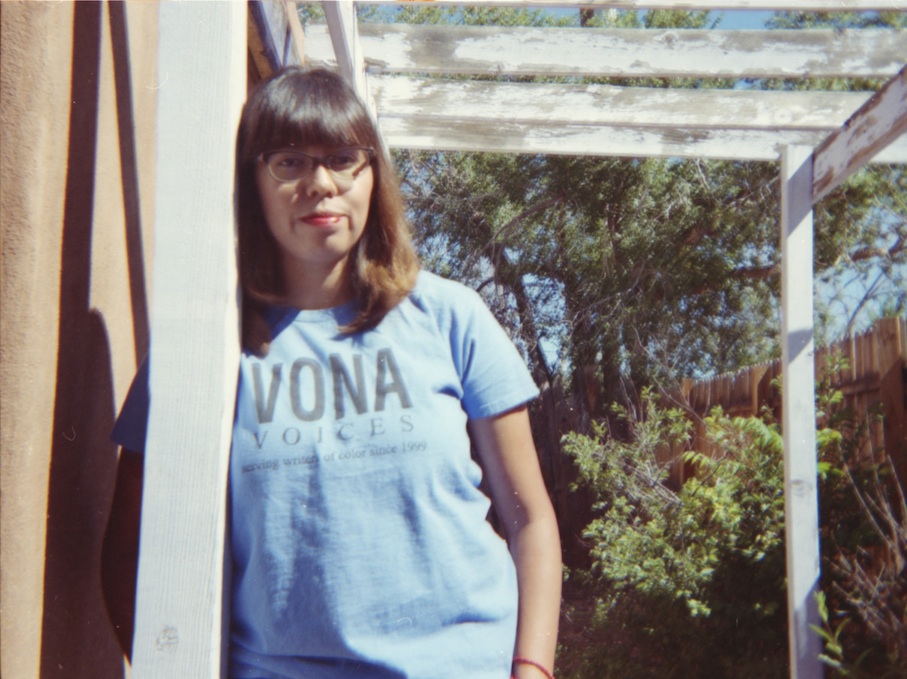 My sweetie rockin’ Cher bangs and her cool VONA shirt. 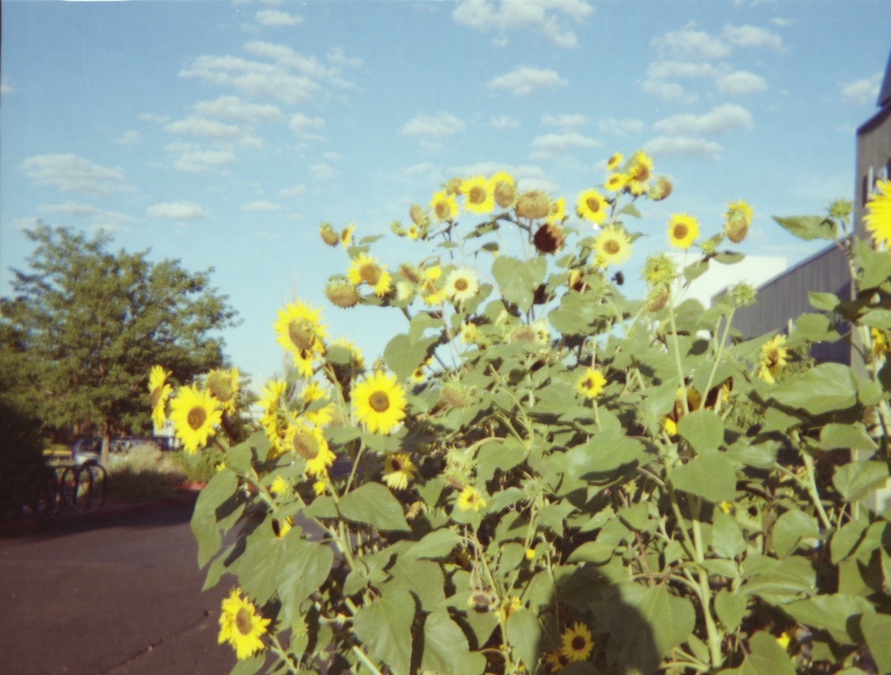 Sunflowers at the co-op. 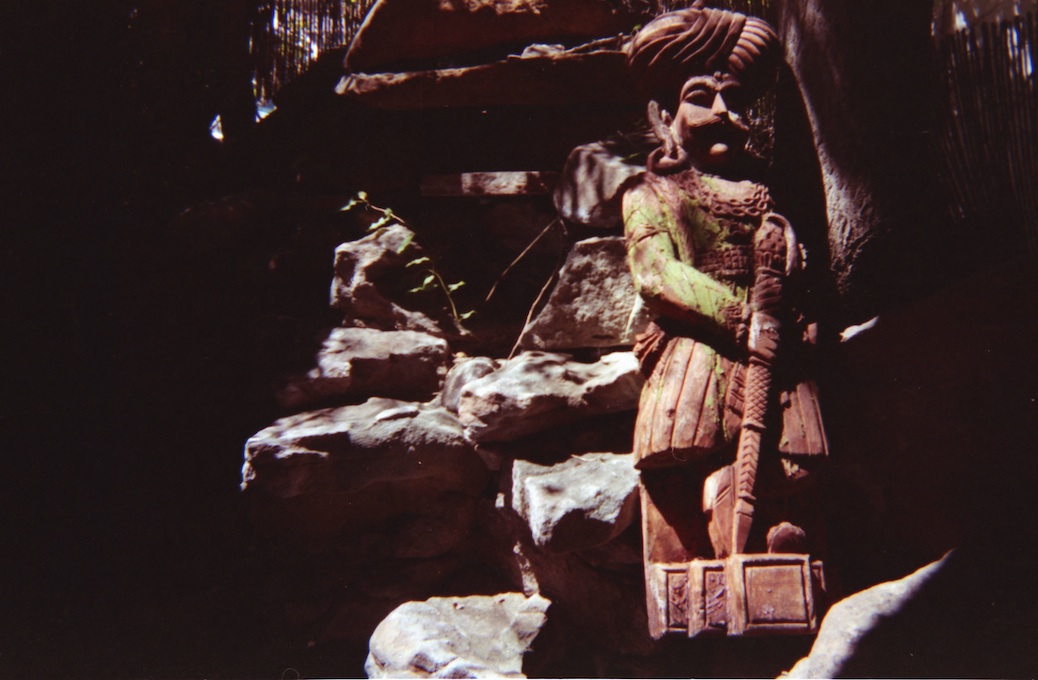 Statue on the patio at India Palace in Santa Fe. 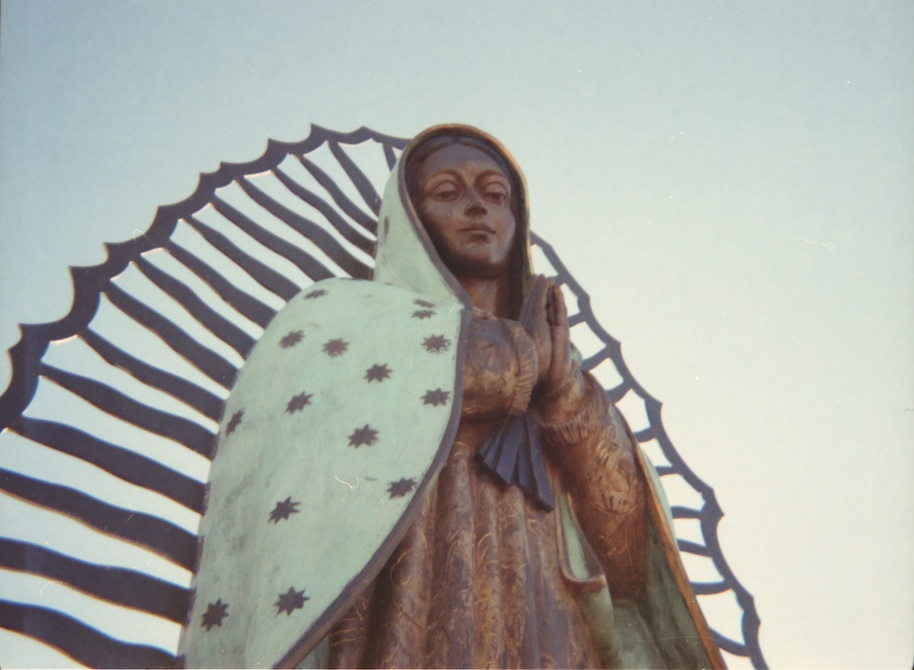 Shrine of Our Lady of Guadalupe.