I did a LOT of color correction on these. The film in the camera in the video is not what I used — that’s a bad roll of Polaroid I use to test film transport, etc. The images are Fuji ISO 400, expired in April of 1997 and it shows. Really grainy and it has a bluish tint almost like expired slide film. I processed this at home (Unicolor C-41 kit) so temperature variation might be part of it. It’s not the camera’s fault. 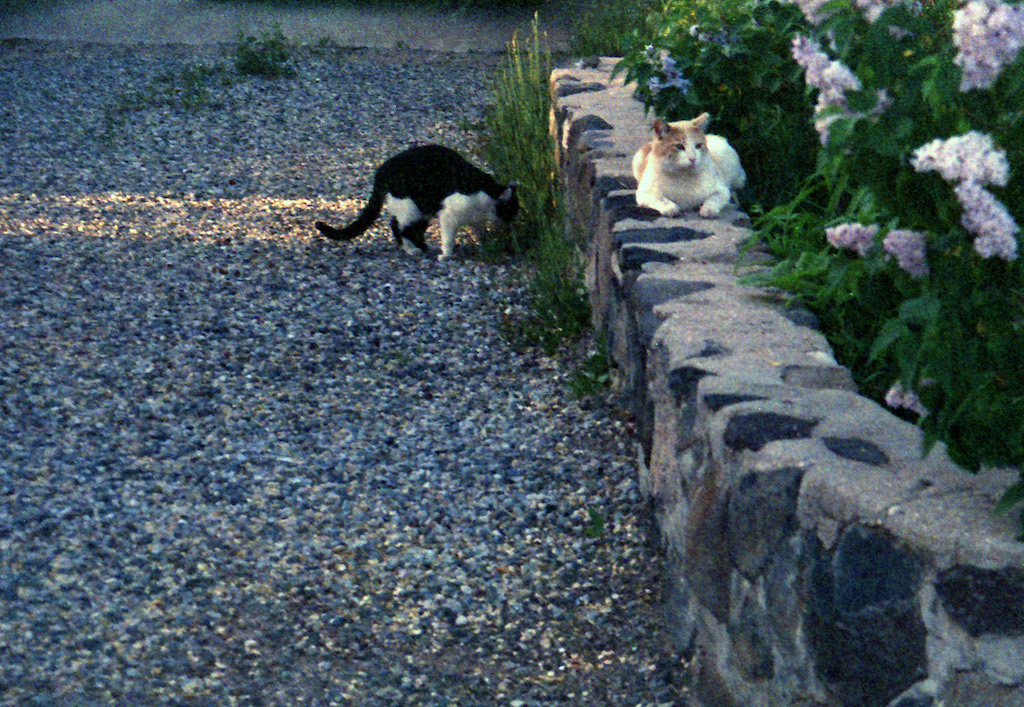 Cropped pretty far into this so it’s extra grainy. A truck pulled up right when I pressed the shutter. 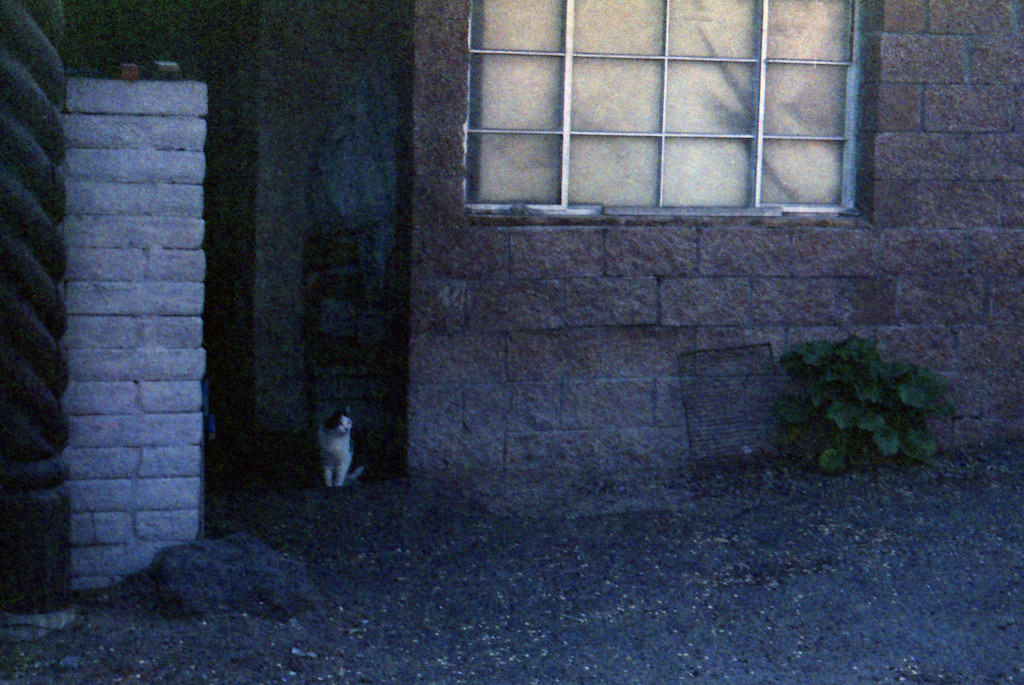 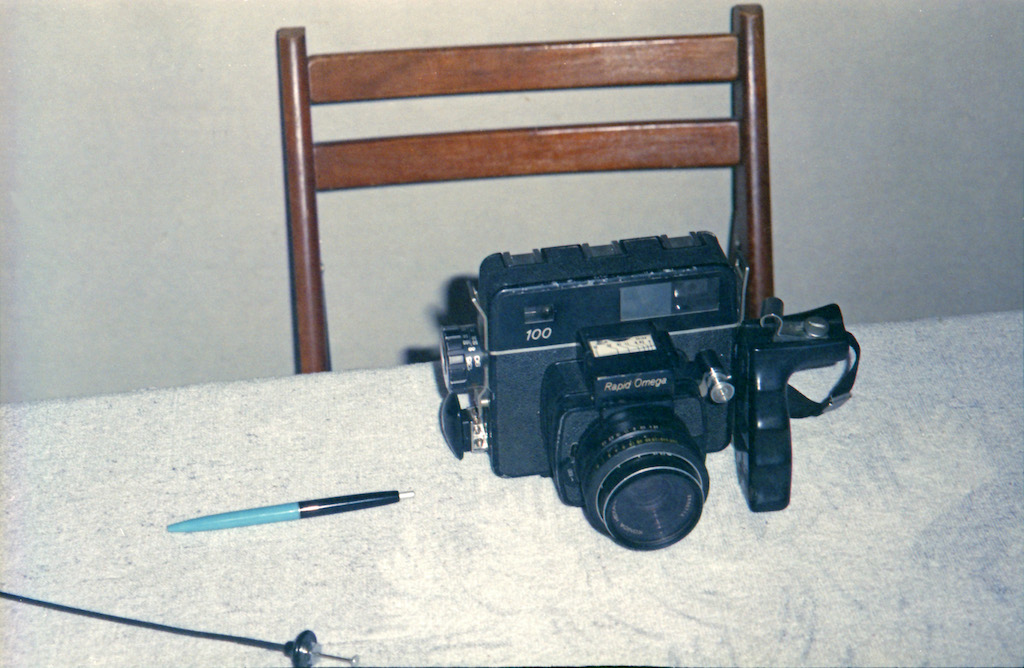 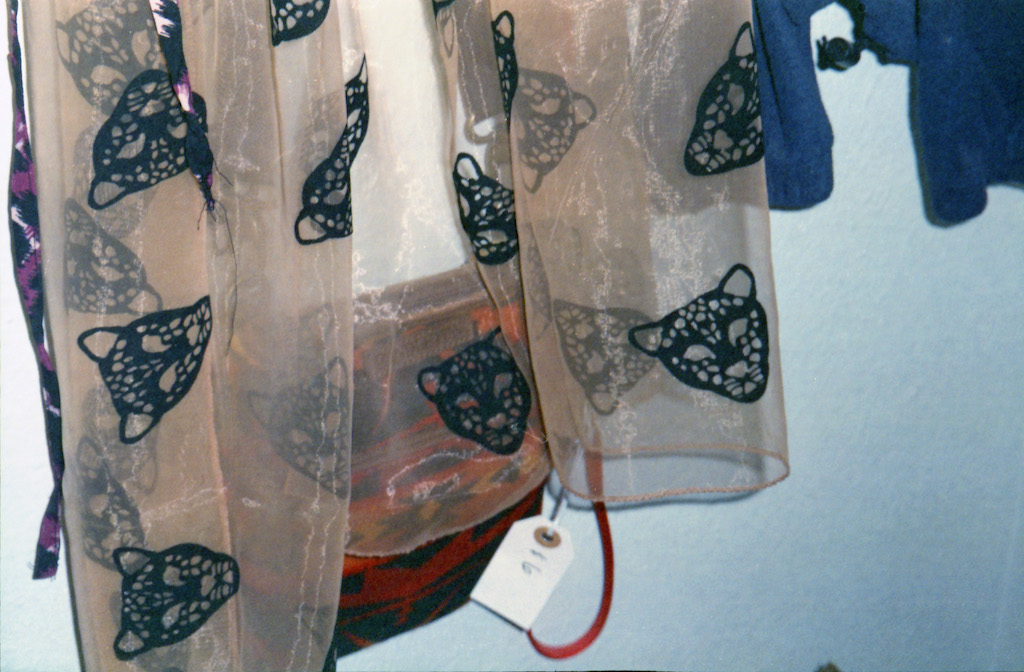 A cool cat scarf M picked up at a pop-up store in Santa Fe. 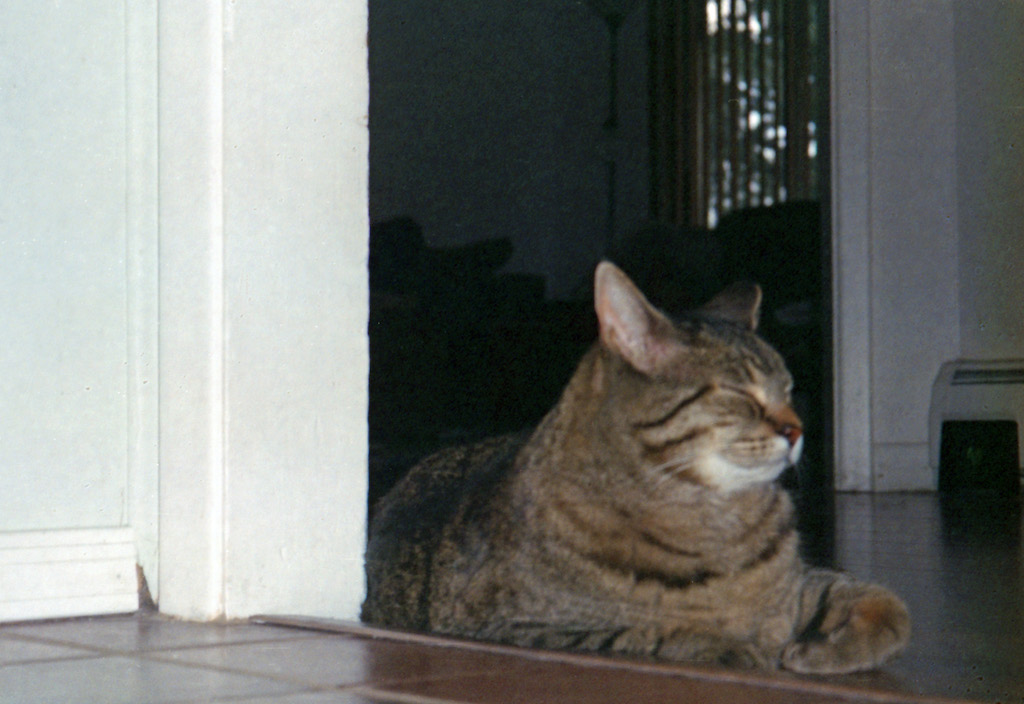 Jem is so chill. 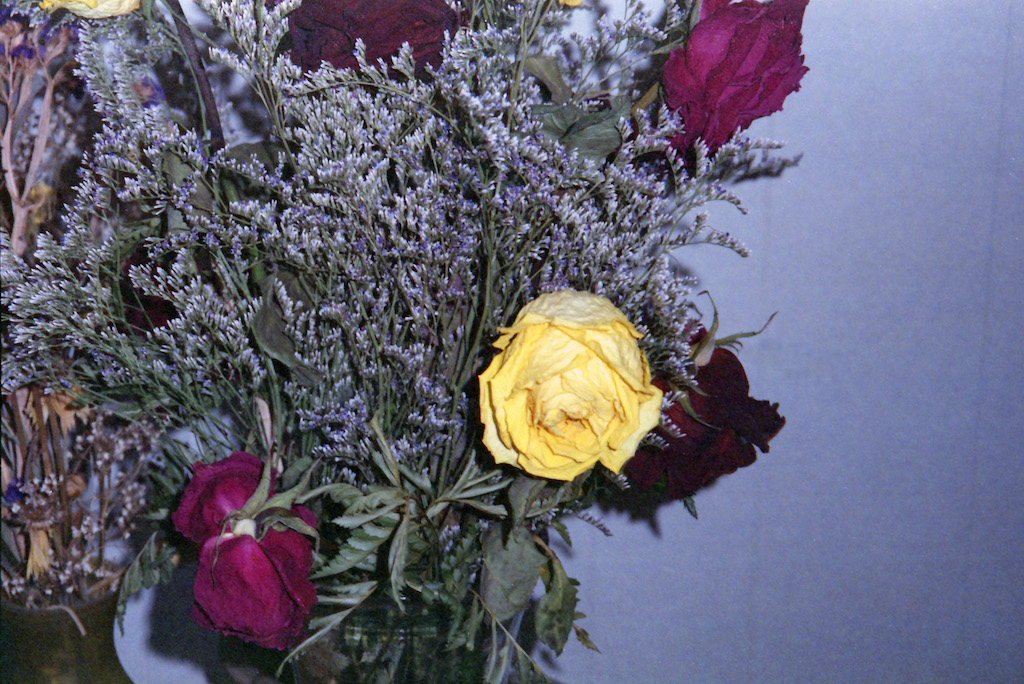 Dried up roses. I got a lot of mileage out of these flowers as a subject.

While editing the video, I thought of a way to do exposure compensation. The lens is smaller than the glass covering and well above the CdS sensor. A bit of neutral density filter material over the sensor but not the lens and it’ll over-expose. Over the lens but not the sensor will underexpose. I have some 3-stop from using Instax in pack film Polaroids…

The film is Fuji 200 i got with a camera lot from a Craigslist ad. It was in his garage and I have no idea how old it is. Pretty grainy so I did some noise reduction and minor tone tweaks. Processed and scanned by Gold One Hour Photo in Los Angeles, CA. 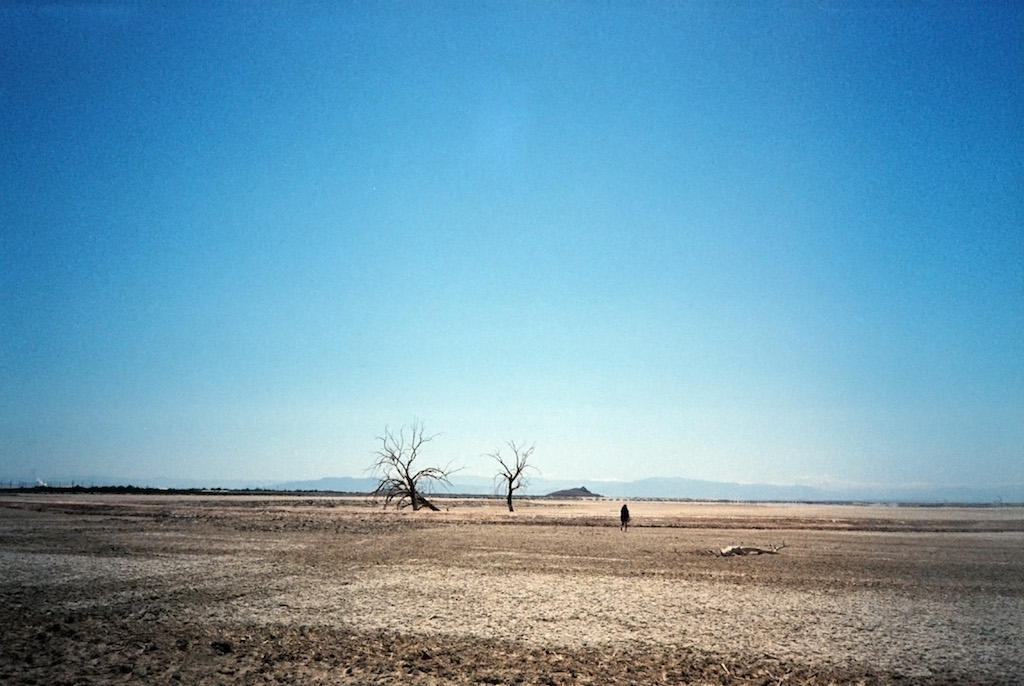 Eastern side of the Salton Sea. 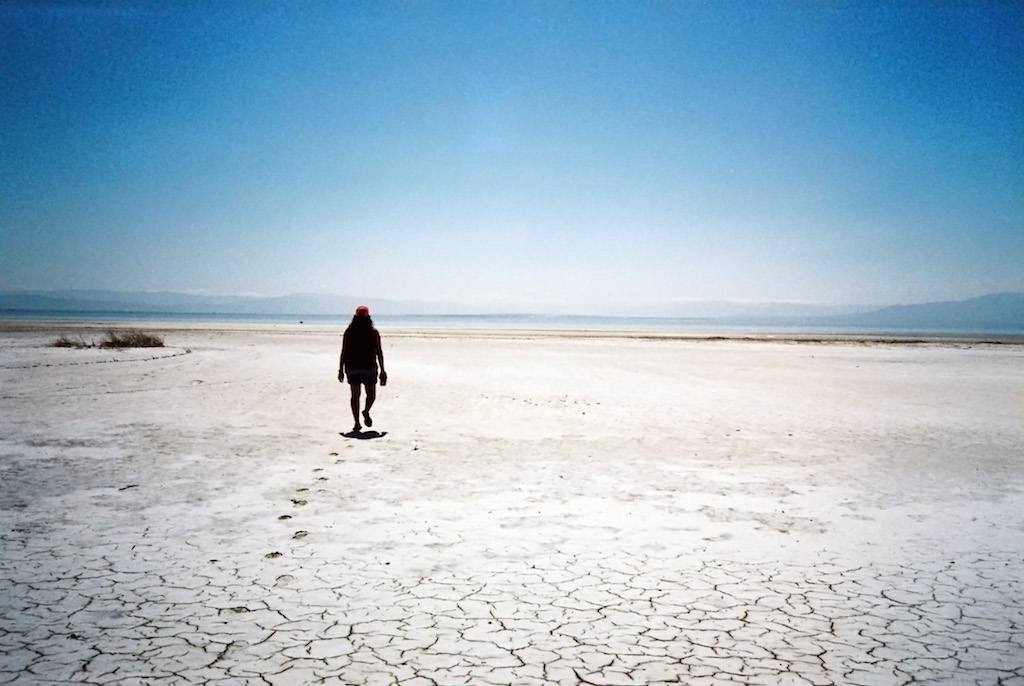 There were some other tracks but not many. 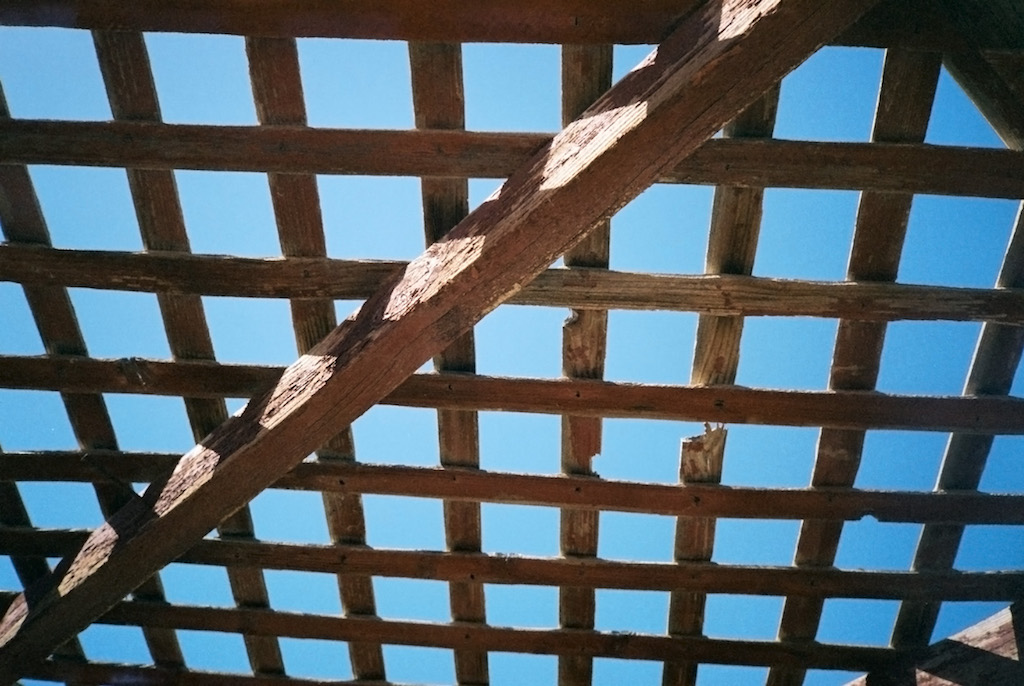 Lattice above a picnic table — now a good 1/2 mile from the sea. 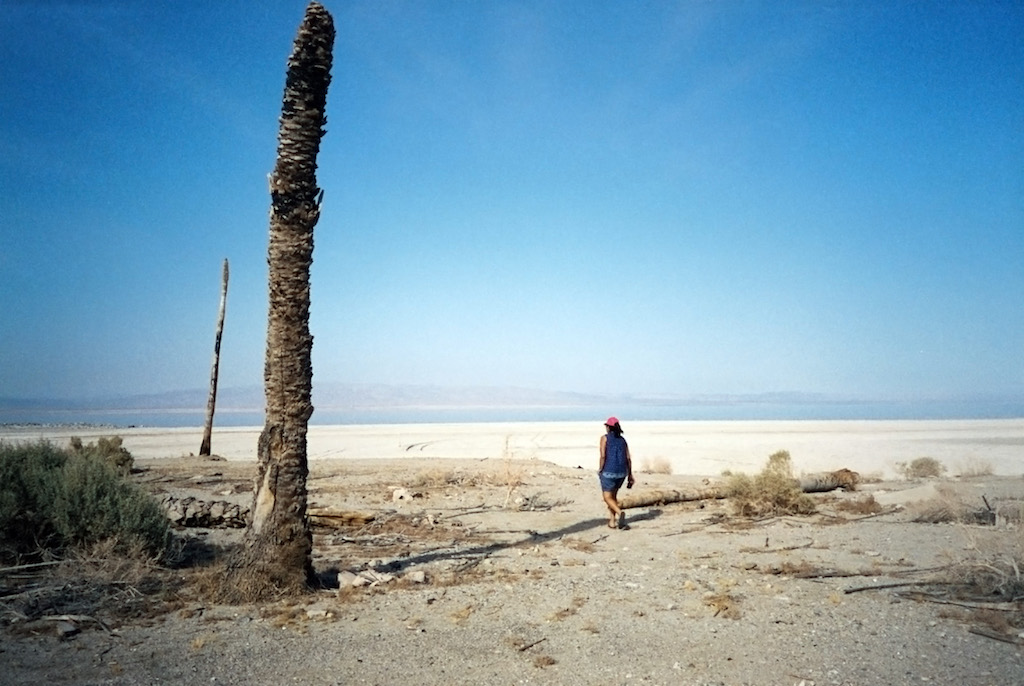 Salton City on the west side of the sea. 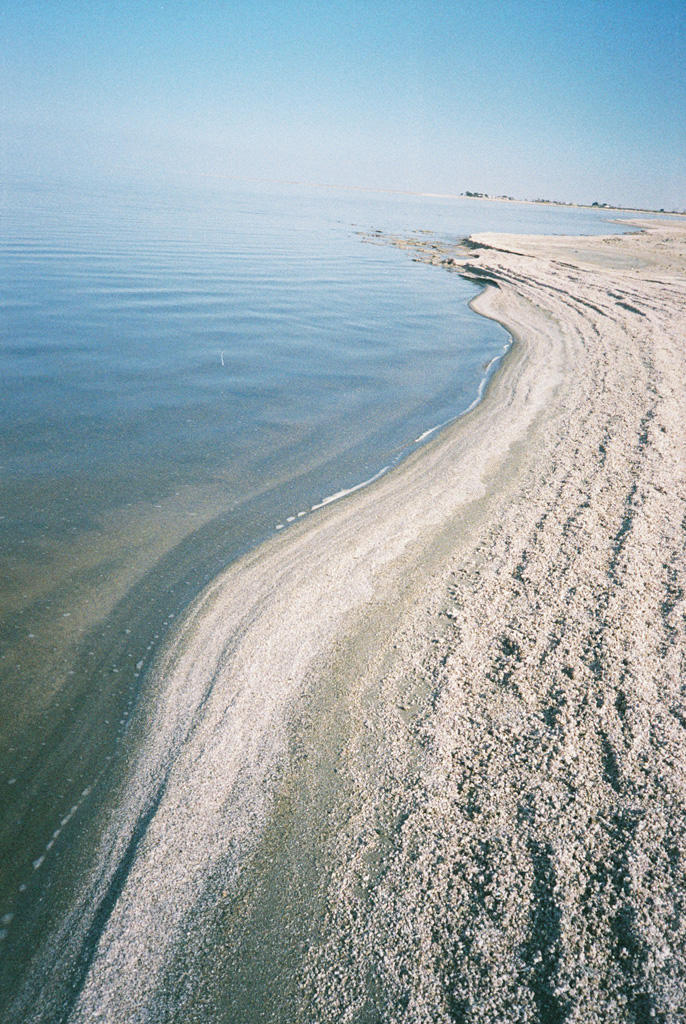 Looking down the coast from Salton City.

The film in the video was shot last year. We went back to the Salton Sea again this year and I shot with a couple of still cameras I’ll review shortly.

The film page at Spectra Film & Video shows what they currently have. I got two rolls of the Agfachrome 200D with processing before it sold out and it worked well and the processing was really well done.

Spectra’s telecine can seem pricey but after working on two 8mm projectors and an editor just to be able to look at the film, it’s feeling cheaper and cheaper: Shooting video of the projection looks awful. Neither scanner is suited to a reel of film of any size. Kludging a slide duplicator is a possibility but that’s going to take forever to shoot frame by frame.

A has the advantages that I don’t have even more clutter, I don’t put in a bunch of time, it’s done by professionals, and I only spend the money when I have something. But, it’s expensive.

B is a one-time investment, but it’s time consuming, good telecine gear is also expensive & I don’t want to do conversions for others for it to pay for itself. And more stuff to store.

C is cheaper in money but time consuming to design and make it. A good design could be set it and forget it once it’s built. I love a challenging project but I have several in line ahead of it.