There is only one image so far but I’m really excited for a couple of reasons.

I bought a box of old movie films (Super-8 & 16mm) and it also came with boxes of color slides. These aren’t buy-them-at-the-gift-shop slides but photos someone took on various vacations. Inside the big boxes are small plastic Kodak slide boxes with labels written on them. They are somewhat jumbled but the small boxes are labeled with where the photos were taken and the recipient.

It’s a little sad thinking about why the boxes are labeled this way. Was the photographer downsizing in his old age or moving to assisted living (we used to call them “retirement homes”)? Did he die and this is how the slides were to be divided? The movies have extra labels indicating they were digitized. I hope the slides were too before they ended up at a Goodwill.

This is a fairly large collection and from what I can tell, he was a talented photographer. I’m not talking about a Vivian Maier kind of find, but a fascinating puzzle.

The box this slide came from is labeled “Hawaii For Holly”. 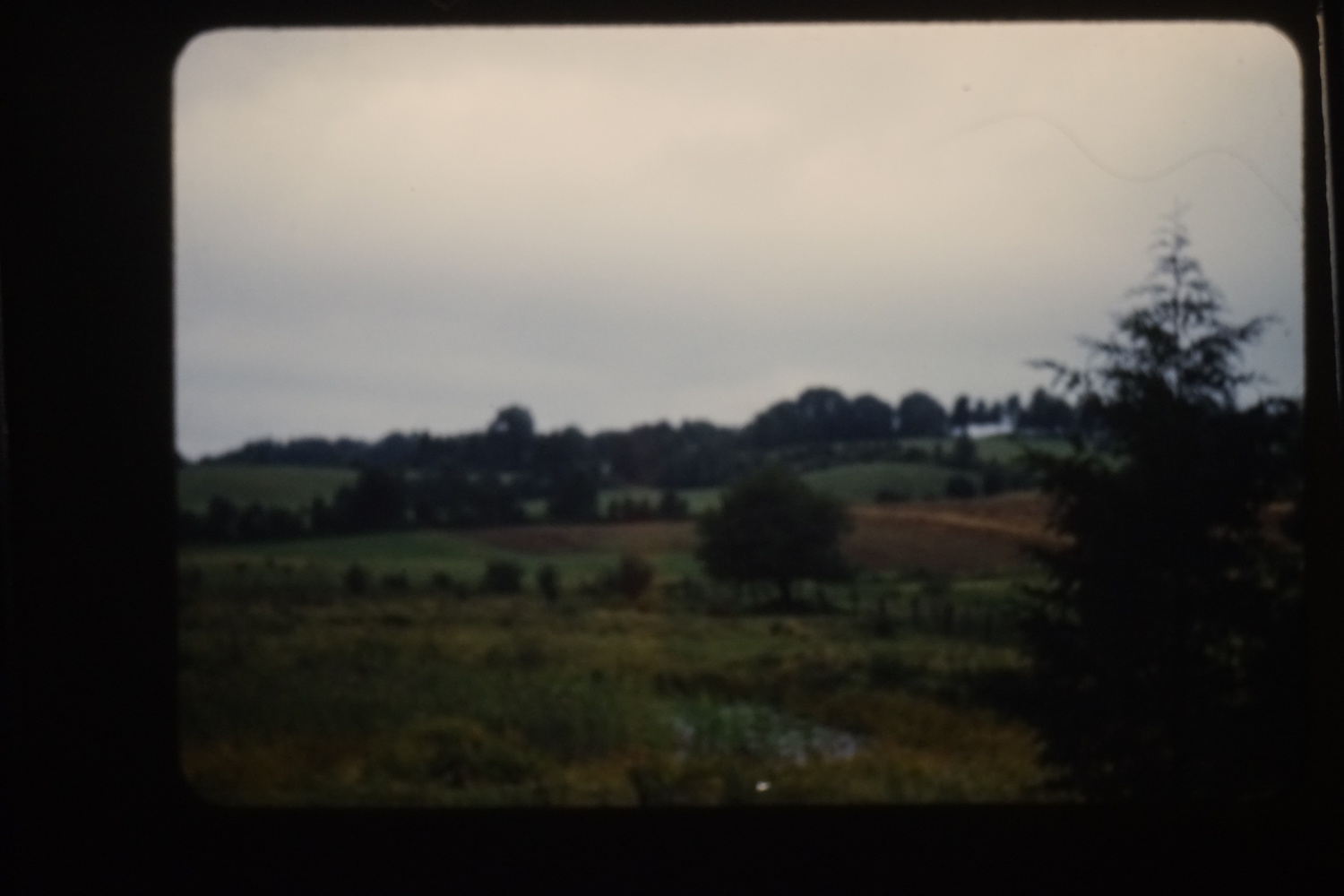 It’s a lousy scan but here’s the second reason I’m stoked — I used an old slide duplicator, an “Accura Zoom Duplivar”. I got it when I bought a different lot of equipment. The duplicator had a Minolta SR mount on it so I hadn’t really thought about using it. I was making myself crazy trying to find an M42 to EOS adapter — I have a couple and couldn’t find either — so I used some of my down time while sick this last week to organize the boxes and boxes of stuff in my office. It still looks like a mess but it’s a mess where I can better find things. Any way, putting lens adapters, macro tubes and such into their own bin, I came across the slide duplicator. Checking to see if I could cannibalize parts I realized the Minolta mount is also an adapter. The slide duplicator actually has a T-mount.

I also have, and miraculously found, a T-mount adapter for the Canon. It works but the crop factor (1.6) from the smaller APS-C sensor on the Canon 60D narrows the field of view too much. I’d have to take multiple shots of each slide and stitch them together. I might as well use the flatbed and the whole point is to get away from the cruel tedium of doing slides and negatives on the scanner. The 9000f is a good scanner but the workflow is error-prone and soooooo time consuming omigodjustkillmenow.

Plan C: I have a full frame digital which hasn’t been featured yet on 52 cameras. I also bought a Canon EOS to Sony E-mount adapter. 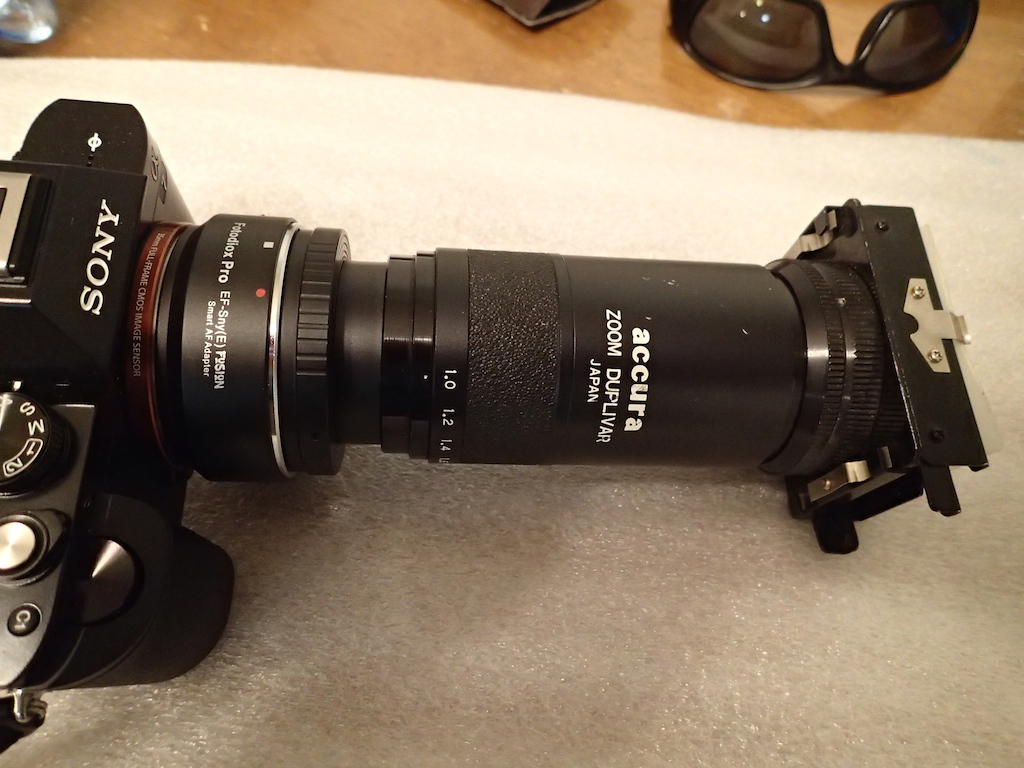 It’s made up from these bits plus the Sony: EOS to E-mount adapter, T-Mount to EOS adapter, T-mount slide duplicator. 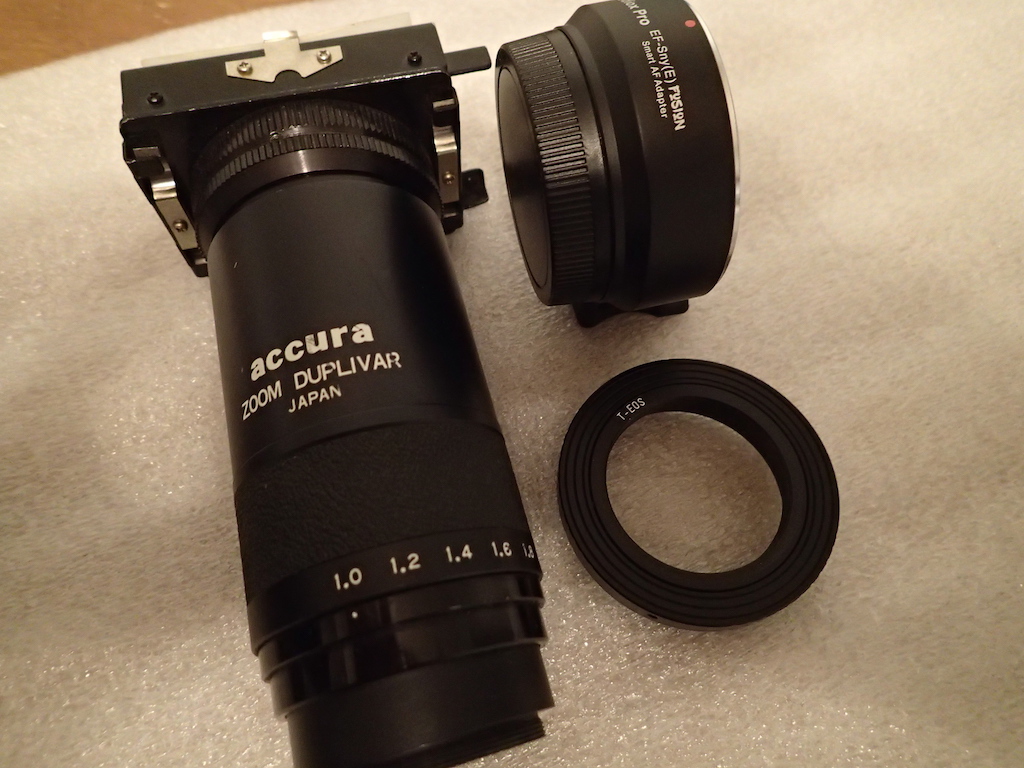 I inserted the slide, held the whole rig up to an LED bulb in the kitchen and pressed the shutter. The focus and light both need a little work but not bad for a quick pass/fail test. The slide duplicator doesn’t really have focusing but it does have settings from 1.0 (life sized) to 2.0 which I haven’t played with yet. Stacking adapters may be introducing some error as well.

I’ll tinker some more and report back here.

They only come on at night. 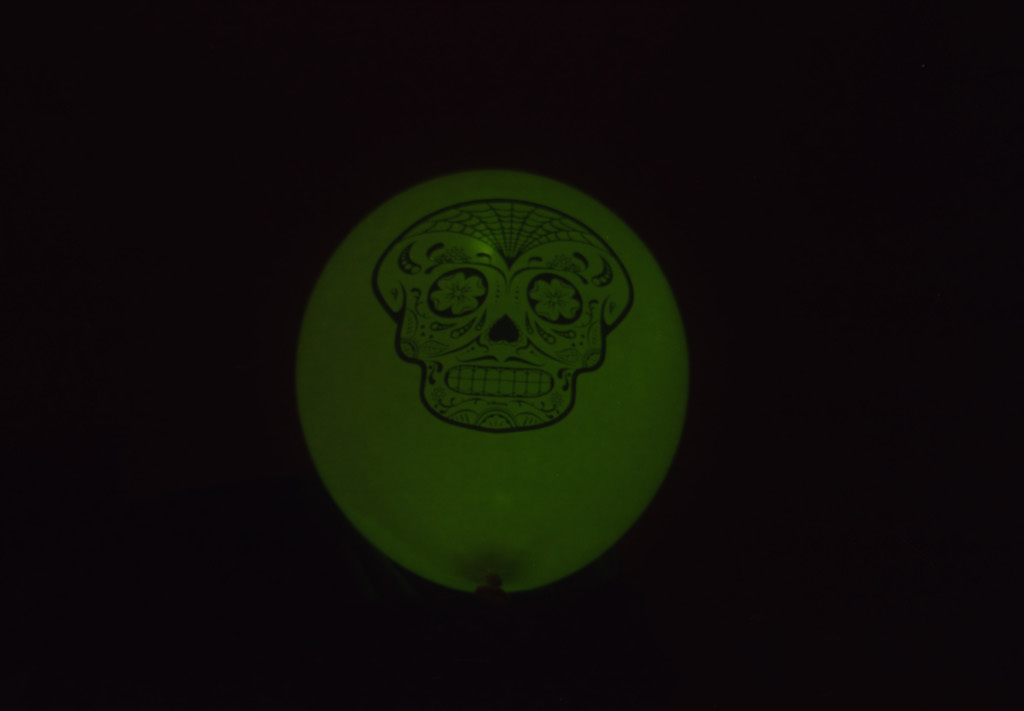 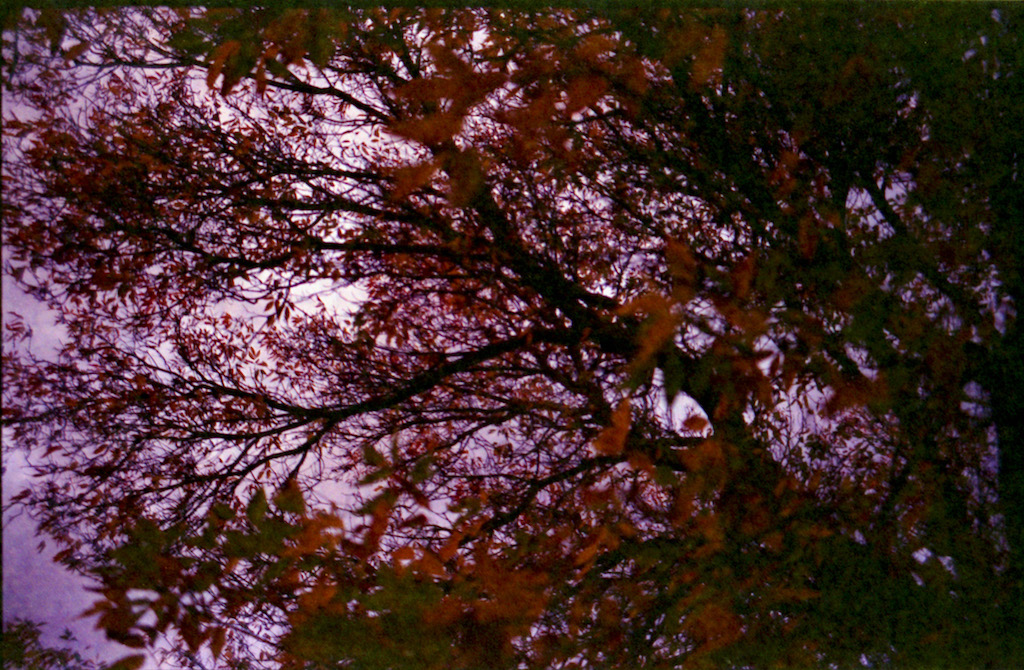 Sunset through the autumn leaves. 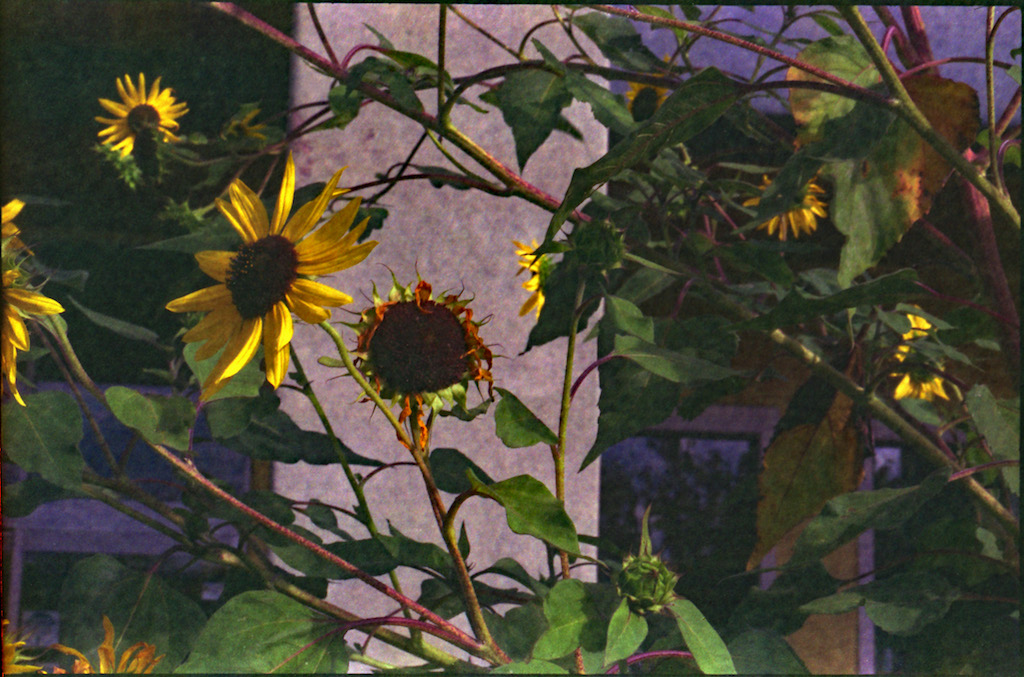 Sunflowers at La Montanita Co-op. Not much editing — it just looks like a painting. 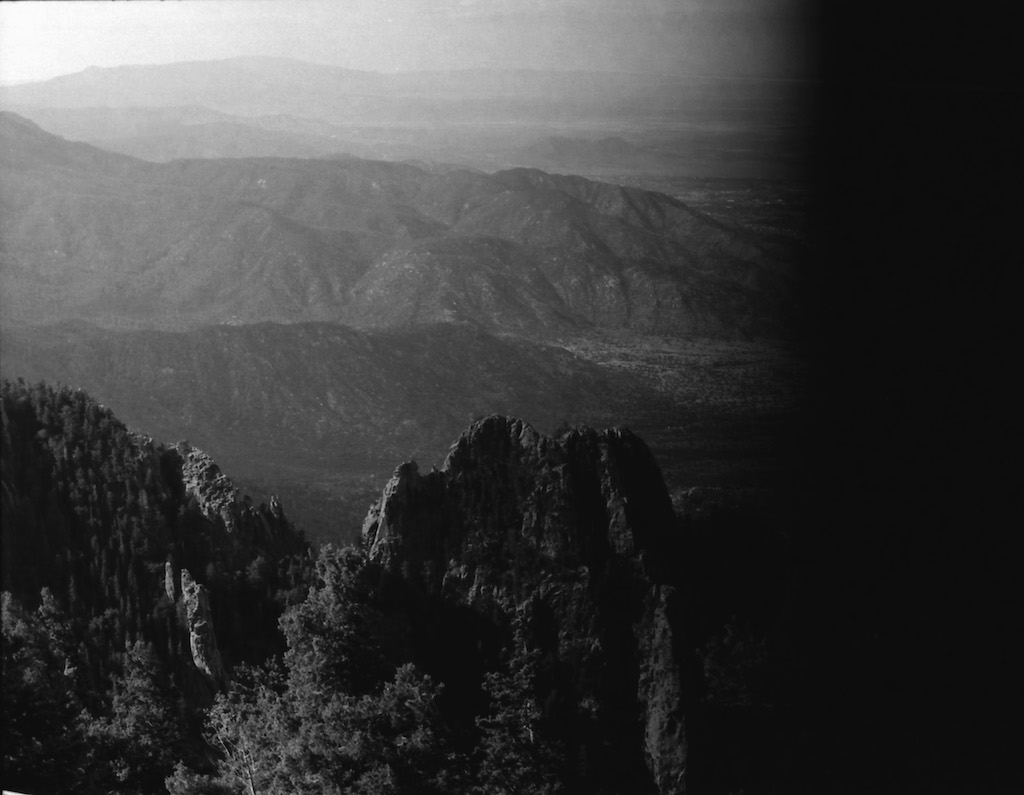 Another frame showing the unexposed portion.

The camera is getting better with use but I want to figure out what’s going on. The side of the frame that’s black and the direction of curtain travel should point the way. 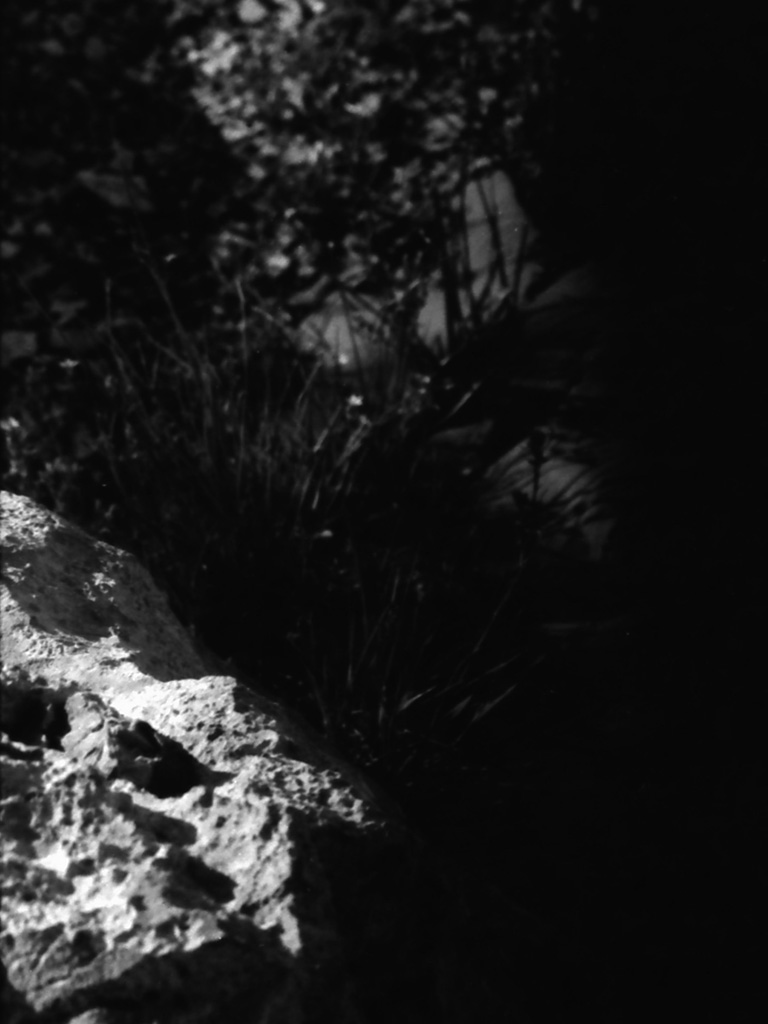 Pretty severe crop. The cool plant that was the real subject was in the black part. 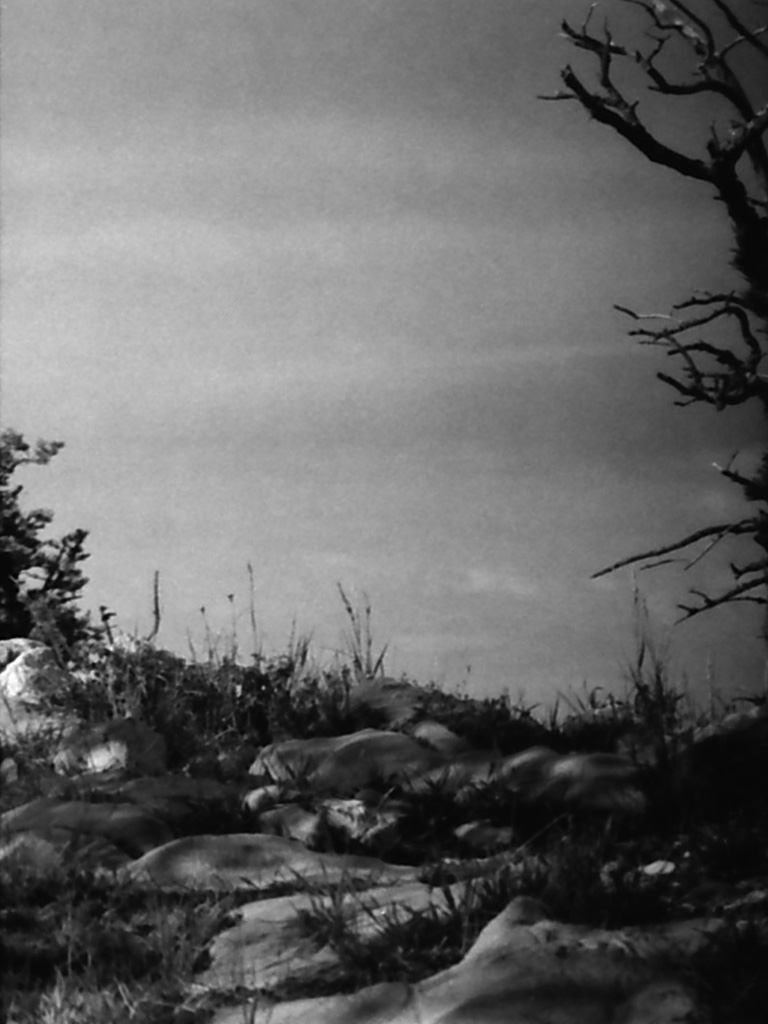 Another crop — the tree was at the right thirds vertical. Love the rocks though. 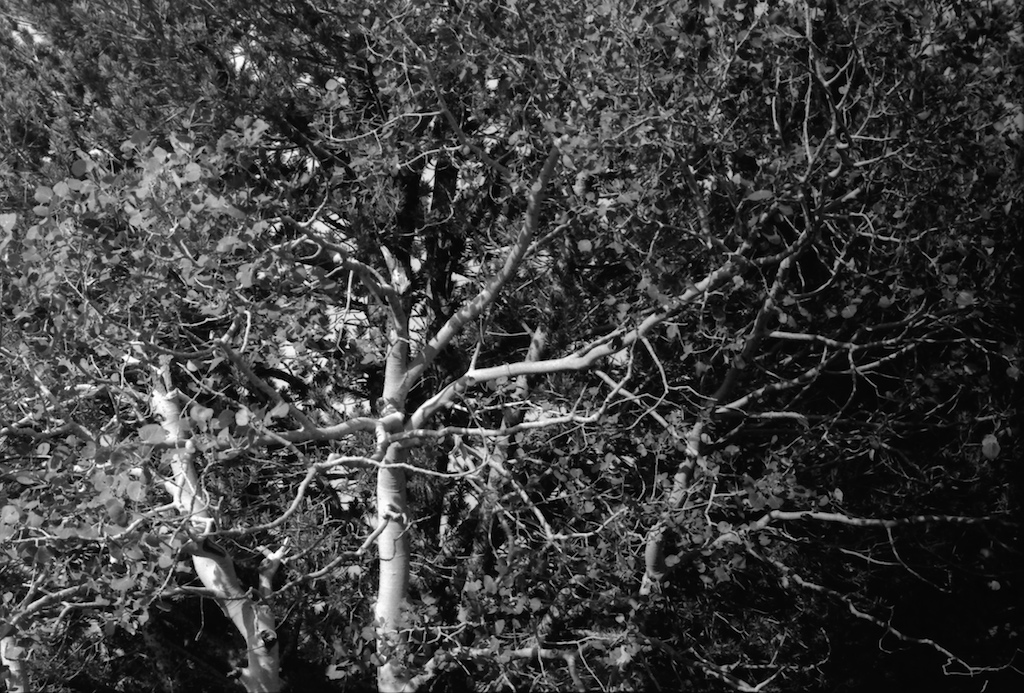 This one, like the shot in the video, came out well and didn’t have the problem. 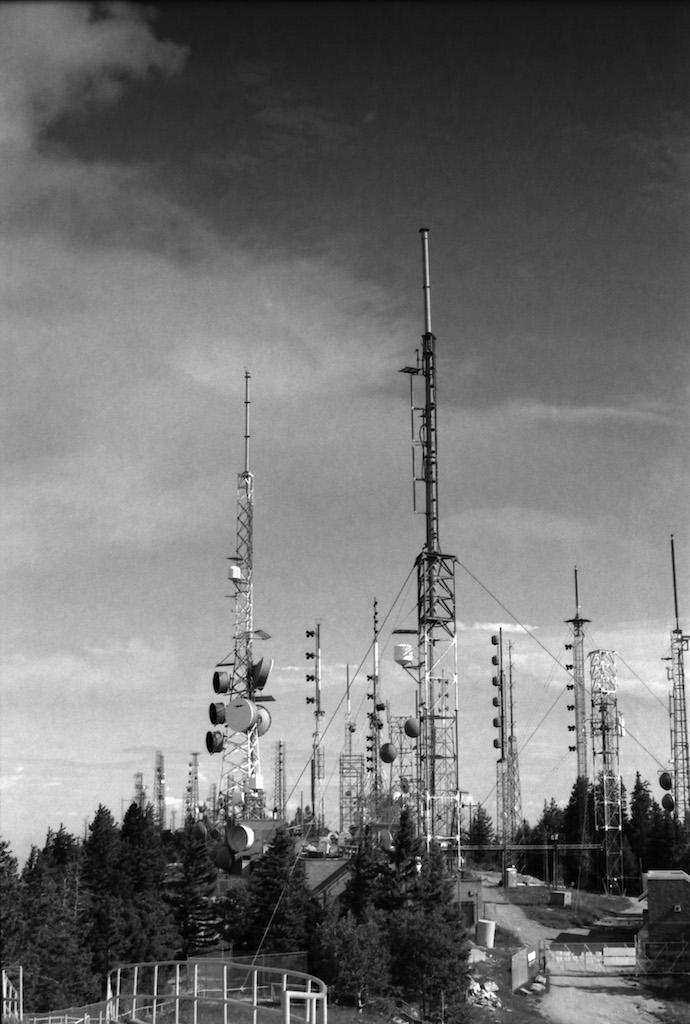 I like the perspective distortion in this one — it gives a sense of height.

I found this roll in a Pentax Zoom 90-WR Date. I purchased the camera on 14 December 2016 as part of a 15 camera lot from Goodwill of Orange County. The images seem to be from California City, CA.

Considering that it’s been in the camera for nearly 20 years and my color chemicals are almost exhausted, it’s a miracle I got anything. 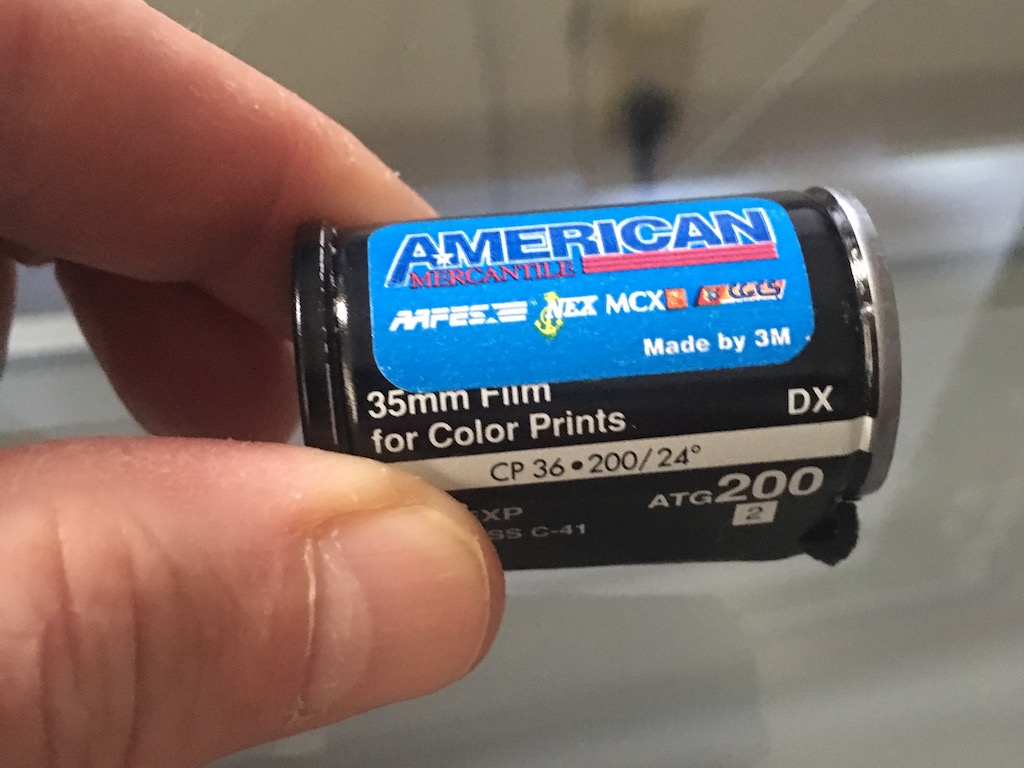 18-ish frames total. 3 of the 18 are partially ruined from light exposure. 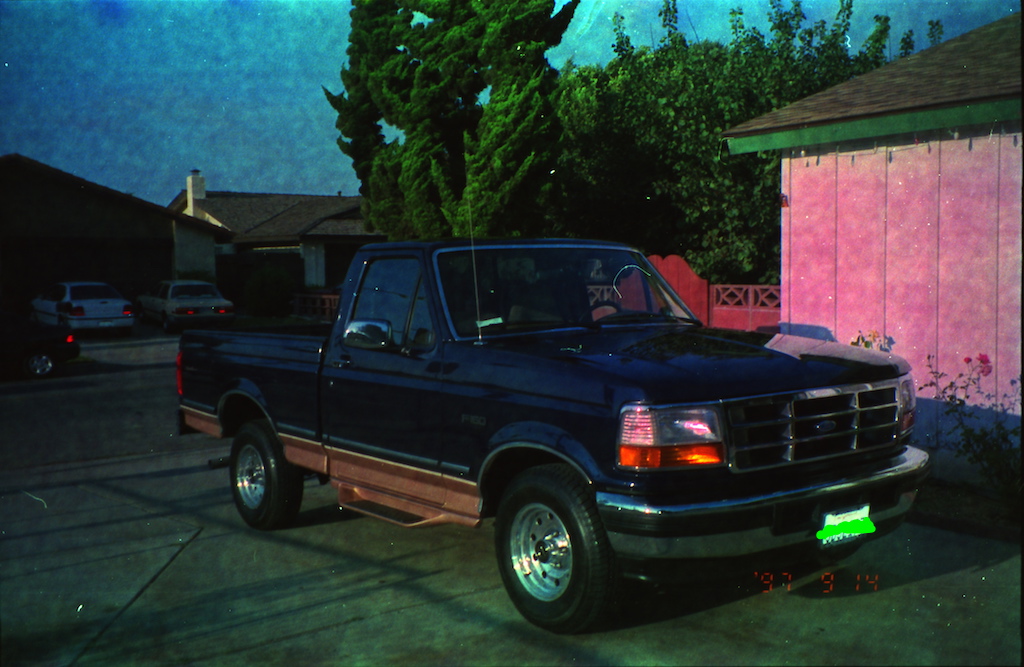 He loves this truck. Half of the images I got feature the truck. 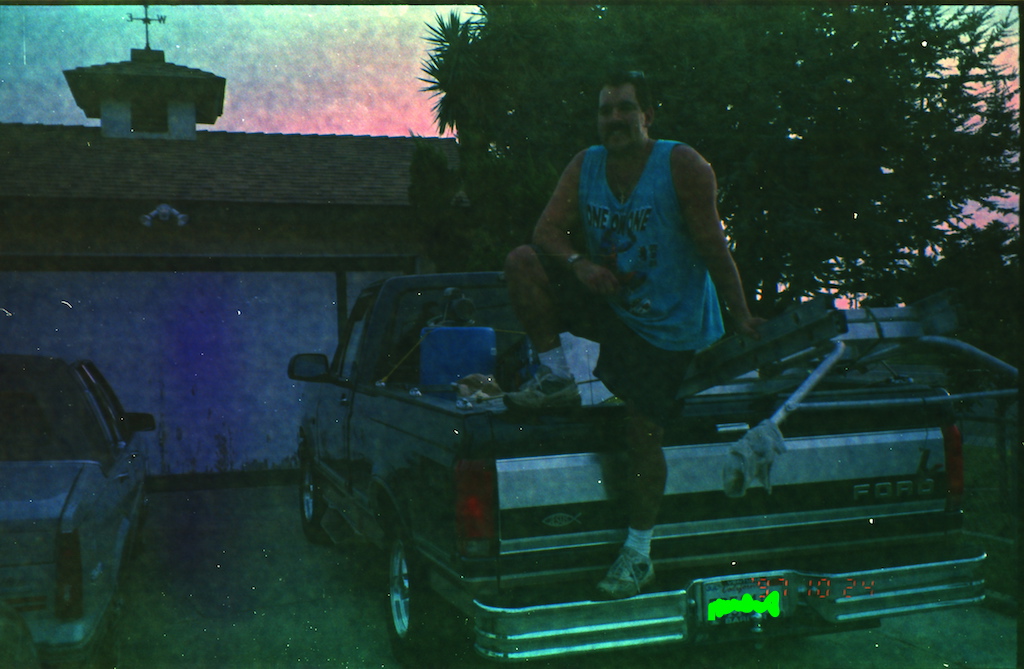 I’m guessing this is the proud owner.

I usually hate date stamps on photos but in this case it was really useful. 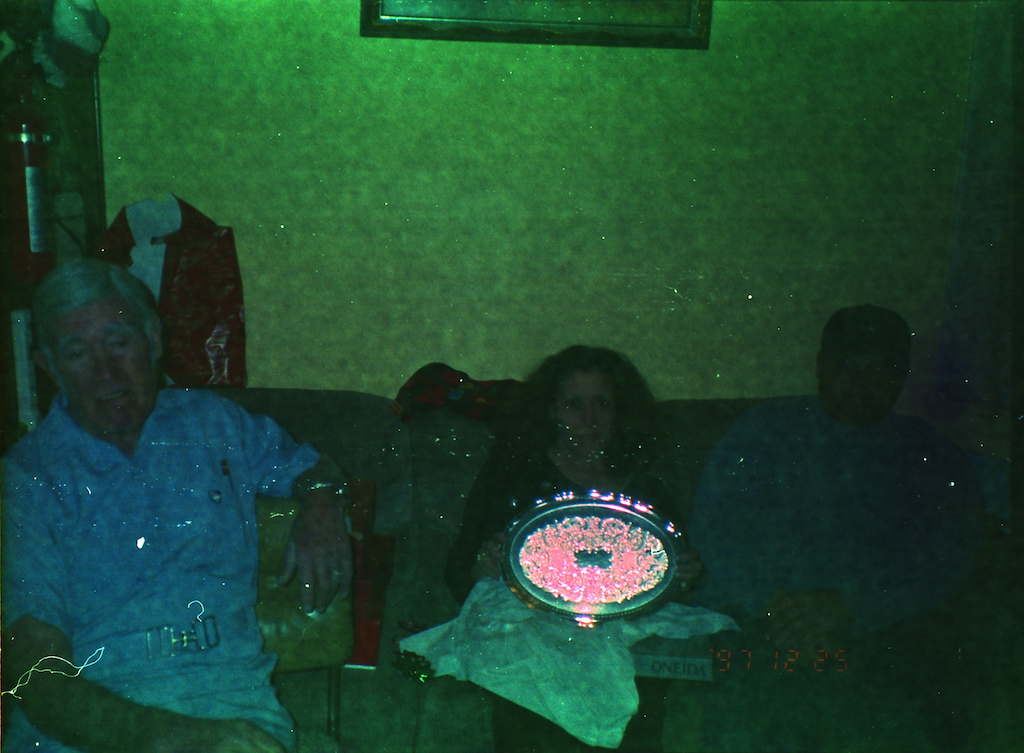 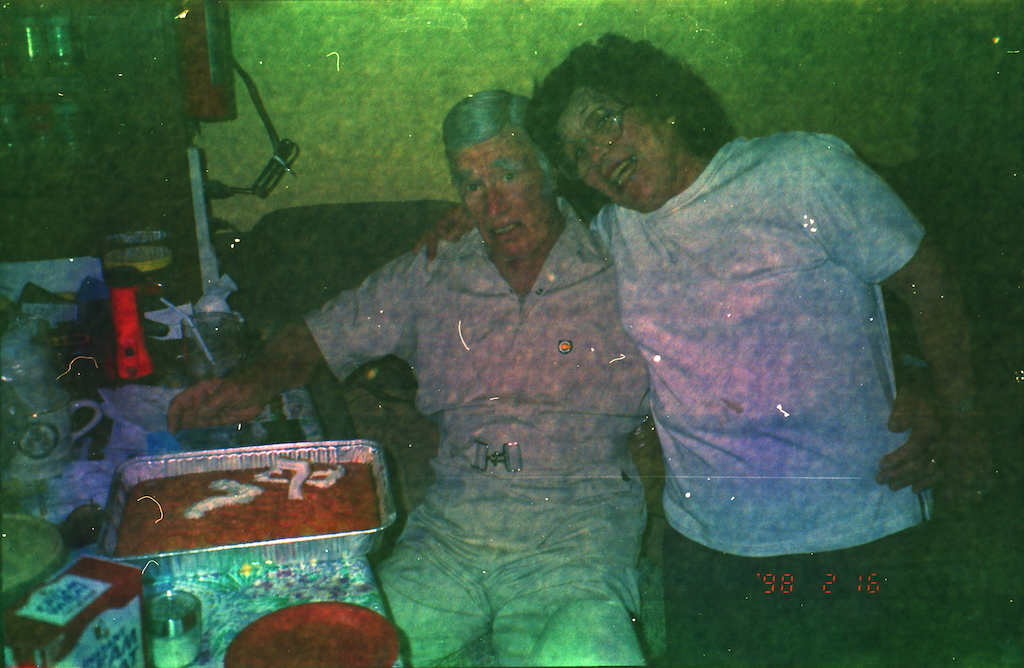 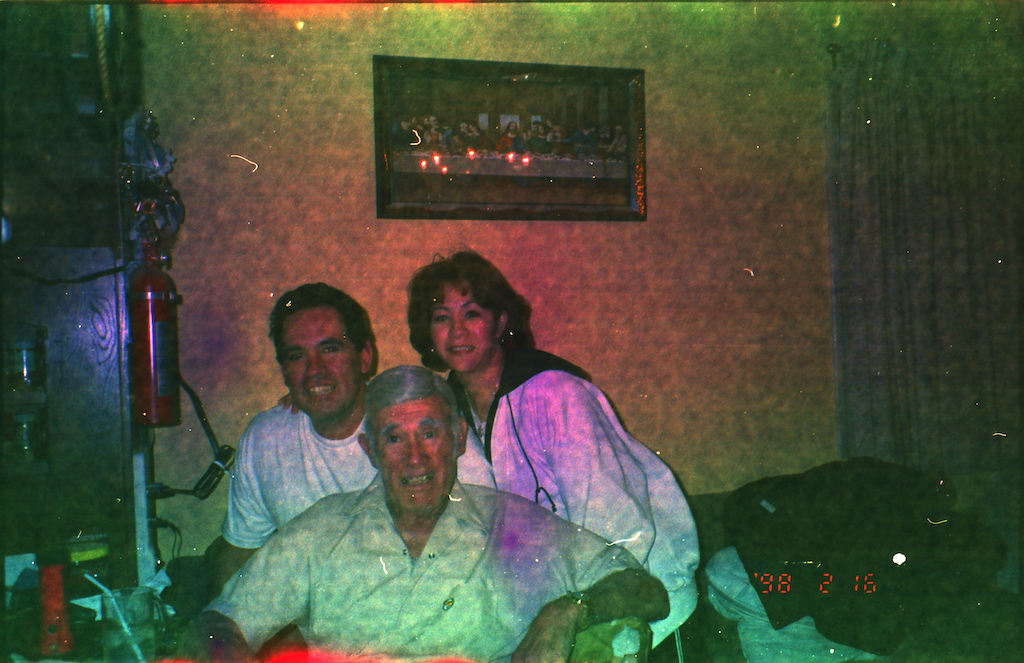 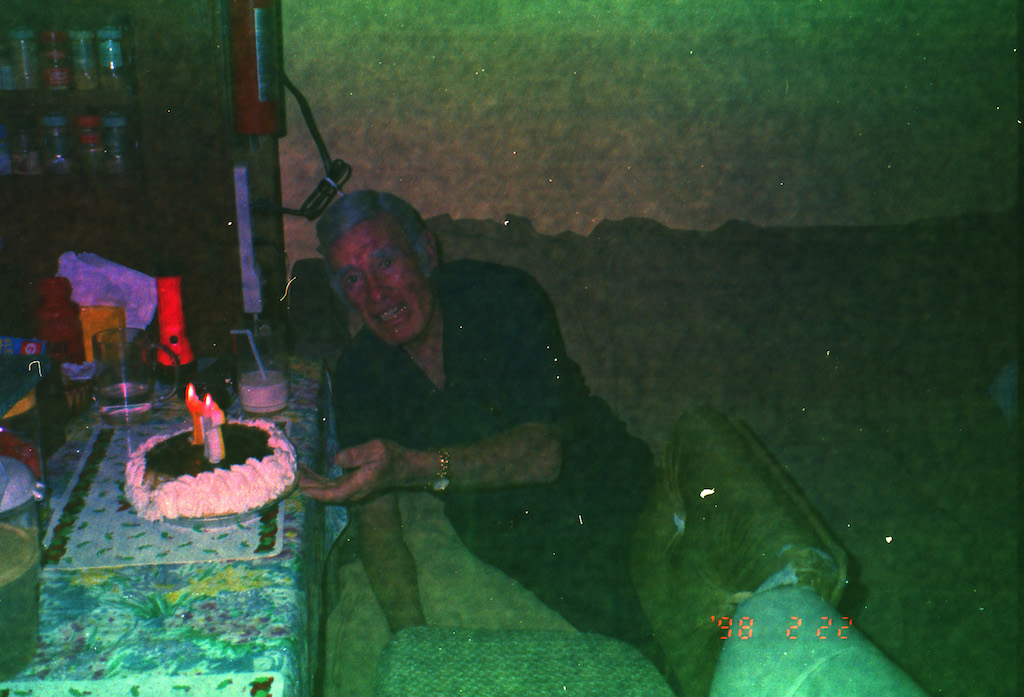 It’s always tempting to make up some sordid backstory about strangers (like I do to amuse myself in restaurants) but they seem nice so I’ll just leave this here.

There are a lot of sites with instructions for paring down 120 spools instead of re-spooling. Give it a whirl if you don’t mind risking a roll. A couple of examples:

One warning if you decide to go this route: The 620 film slot and the corresponding piece in the camera that turns it are smaller. Make sure the adapted roll is smooth on the ends and rotates freely. Otherwise, the bit inside the camera may rotate inside the slot of the film spool and break it. Filing the end of the spool makes it even weaker. See my experience using a 120 spool in a Rover (Diana) camera. 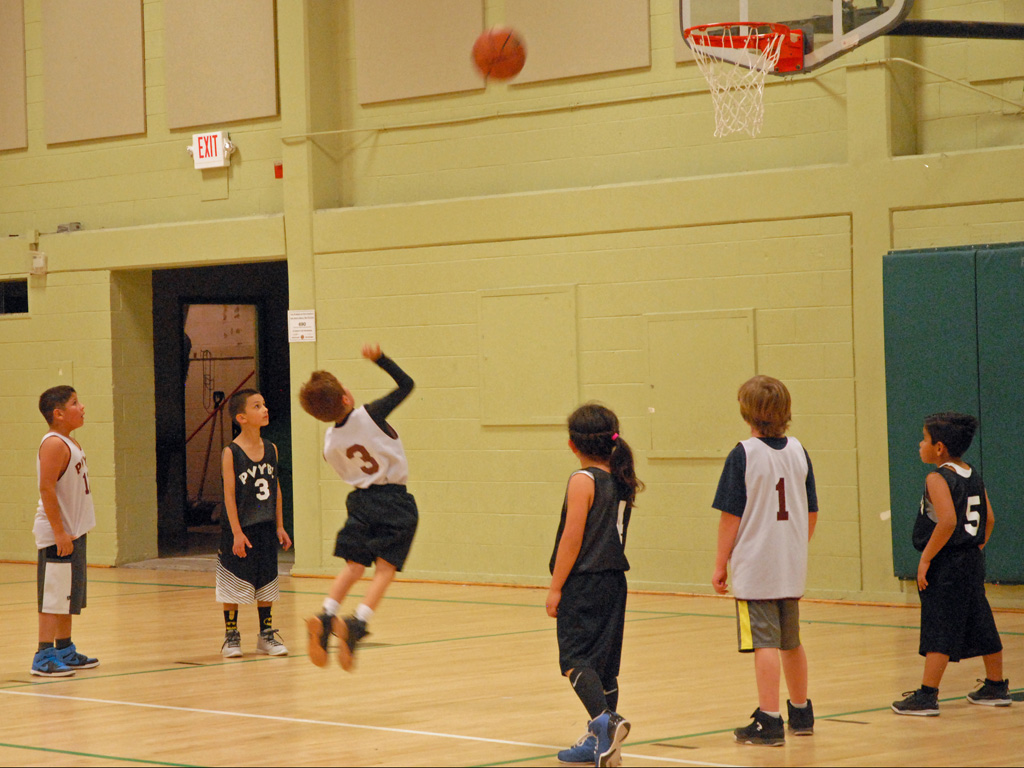 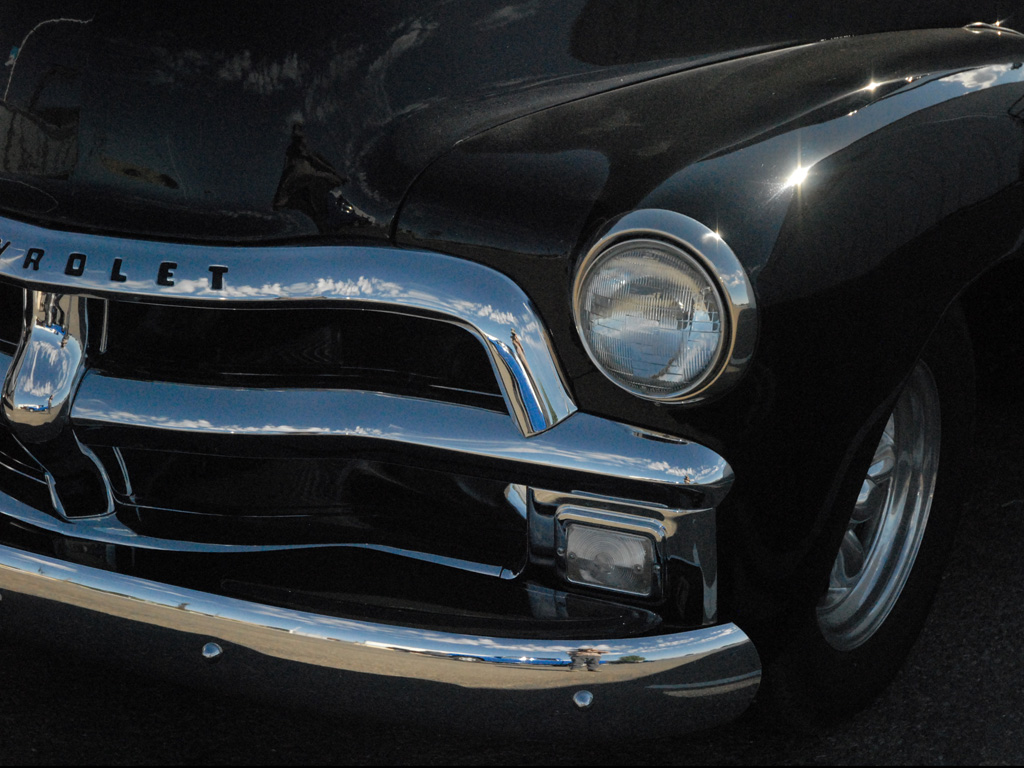 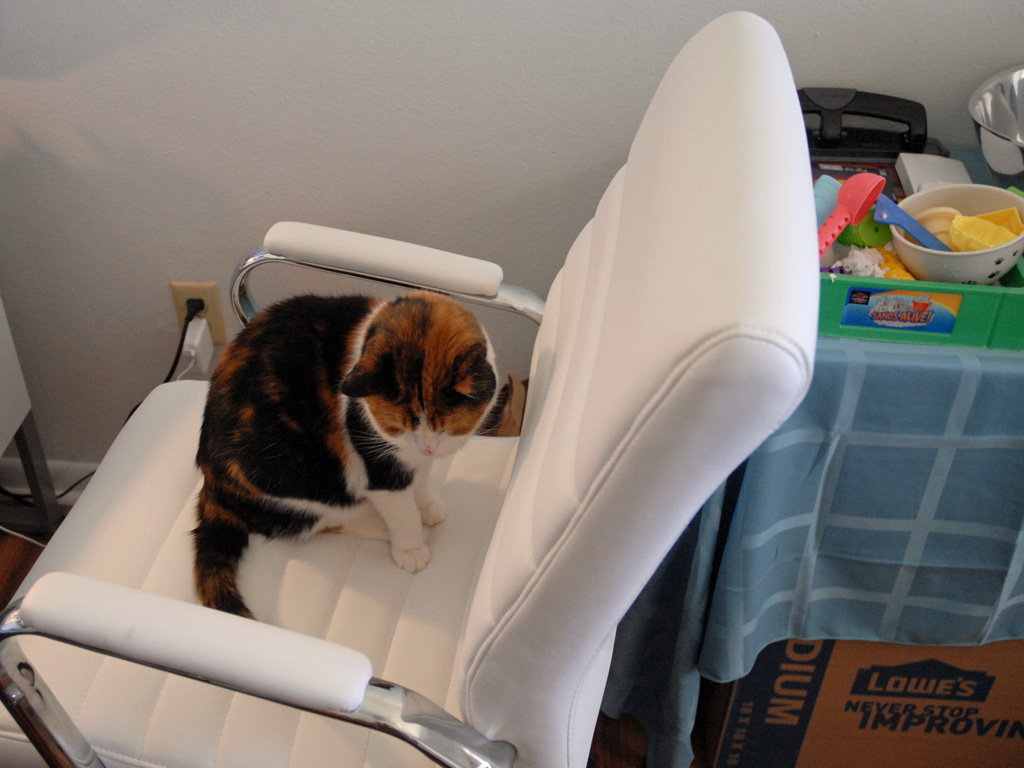 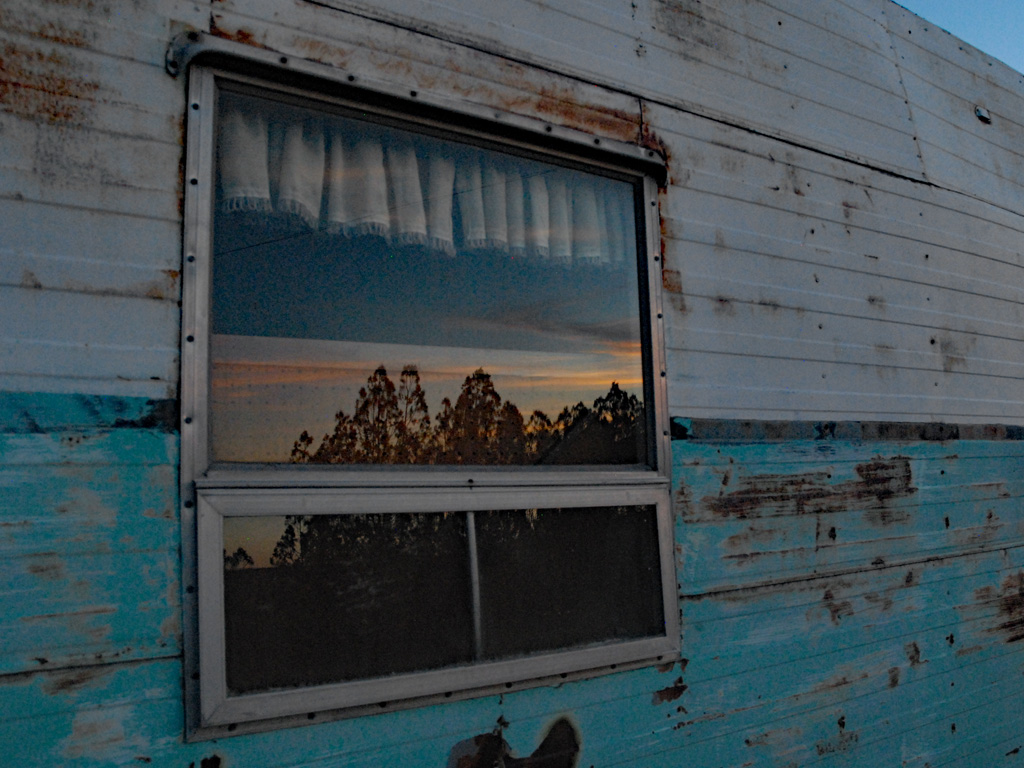 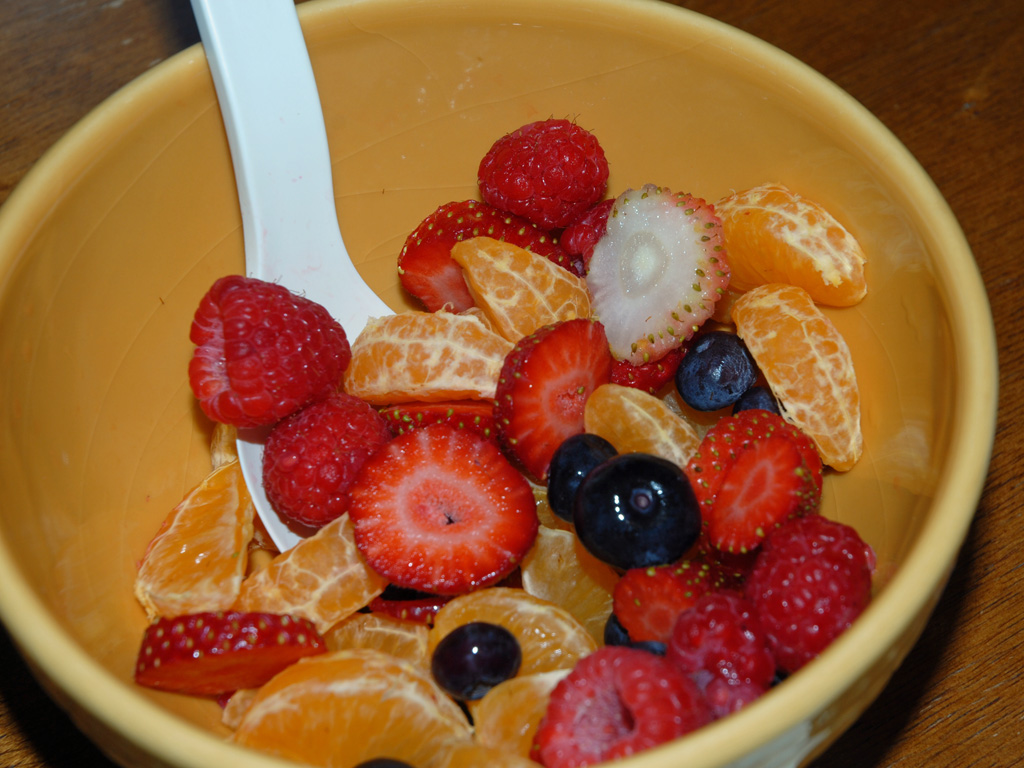