Update 15 April 2019
I’ve gotten a few questions about this camera, particularly about loading film. It either works right the first time or it’s a giant PITA, so here’s a short tutorial.

If your canister goes in easily, skip down to the film leader portion. Sometimes re-used canisters or canisters for home loading can be a little off size-wise. 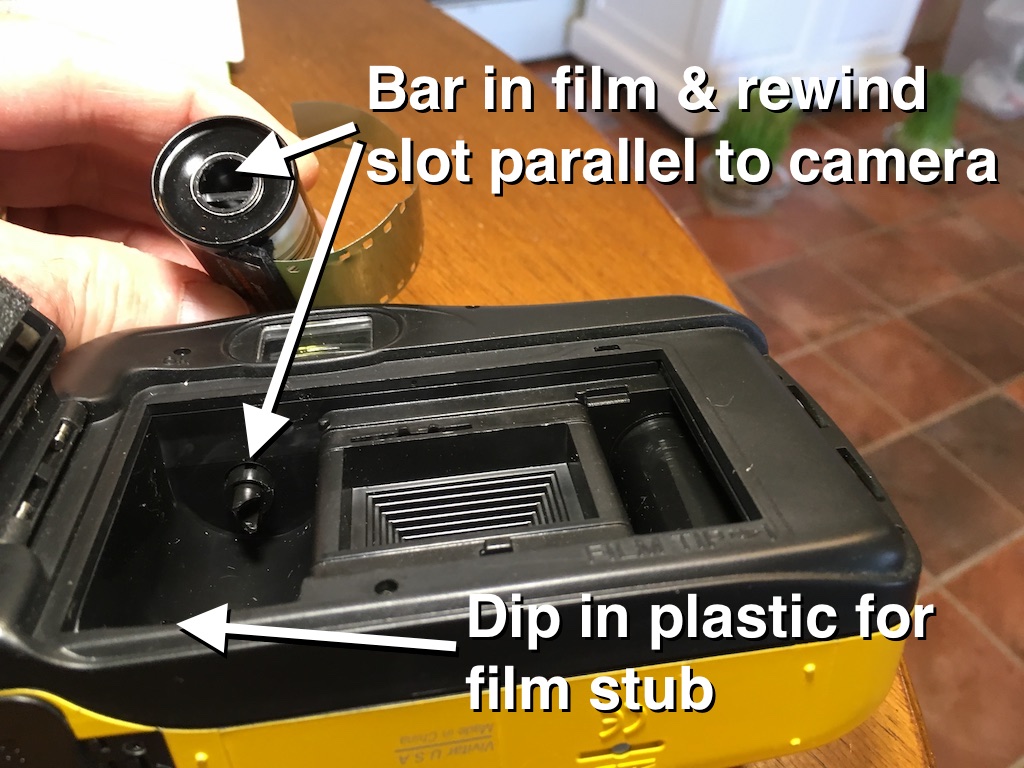 I’ve had better luck with the rewind slot in the camera and the bar in the film parallel to the camera. You can see there’s a small dip in the plastic at the bottom of the chamber. 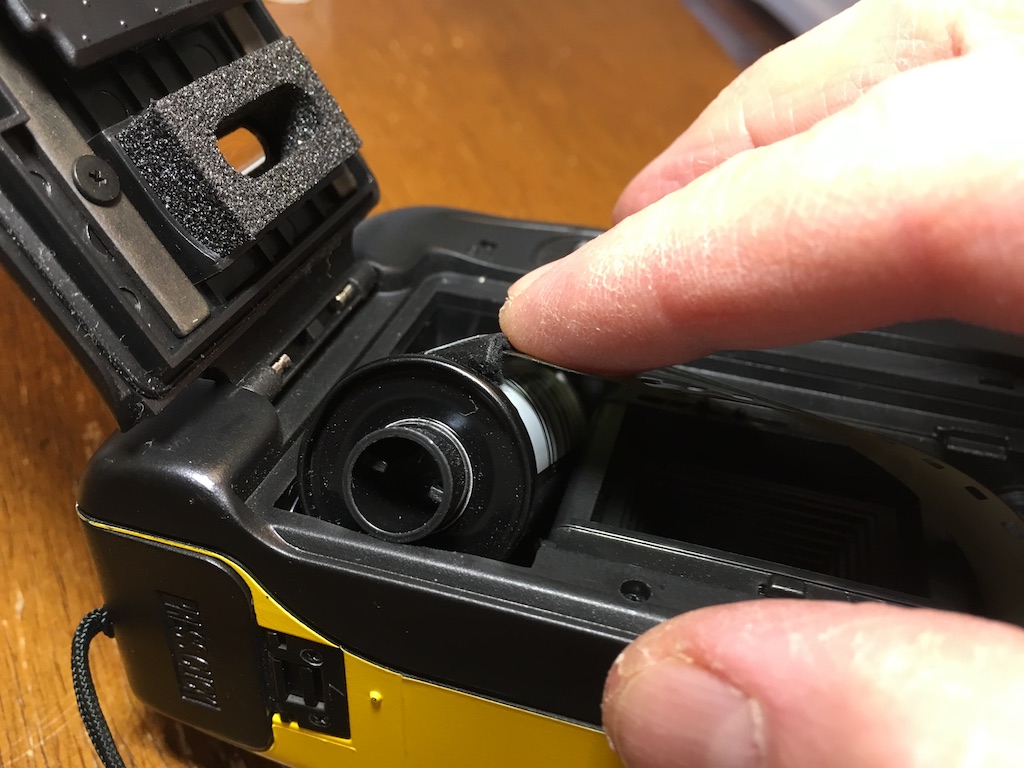 Top 1st. A pretty steep angle and it may not clear the bottom at first. Jiggle-rotate the canister as you push up (towards camera top) until it goes in a little further. 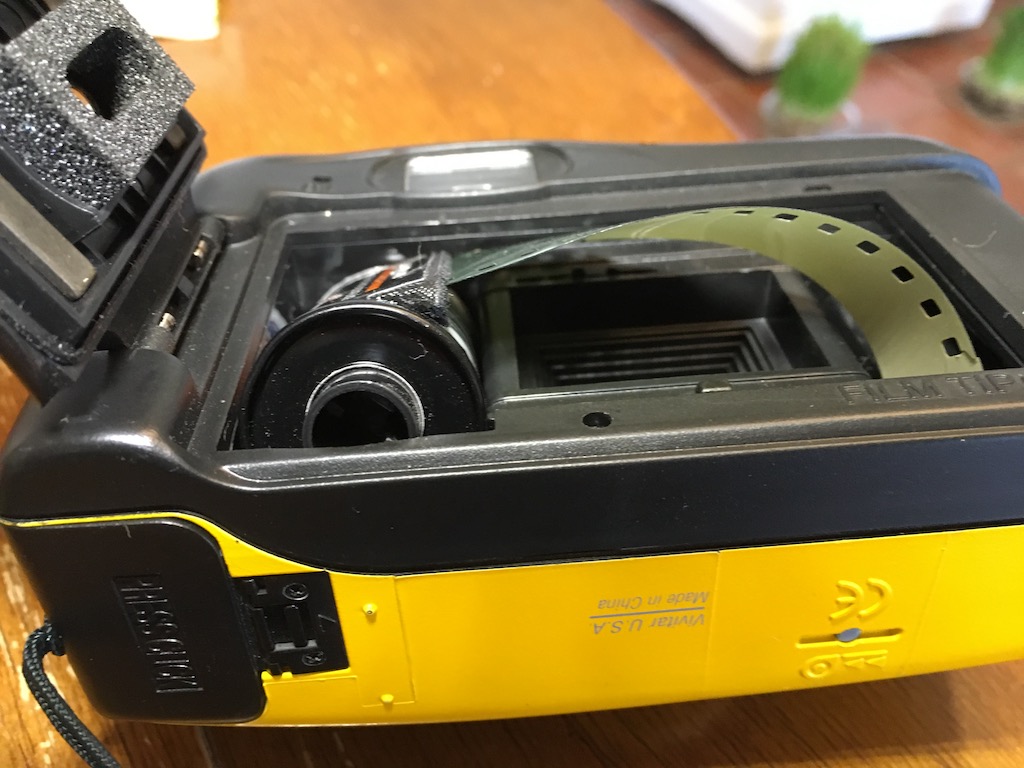 It may rub the plastic at the bottom of the chamber. 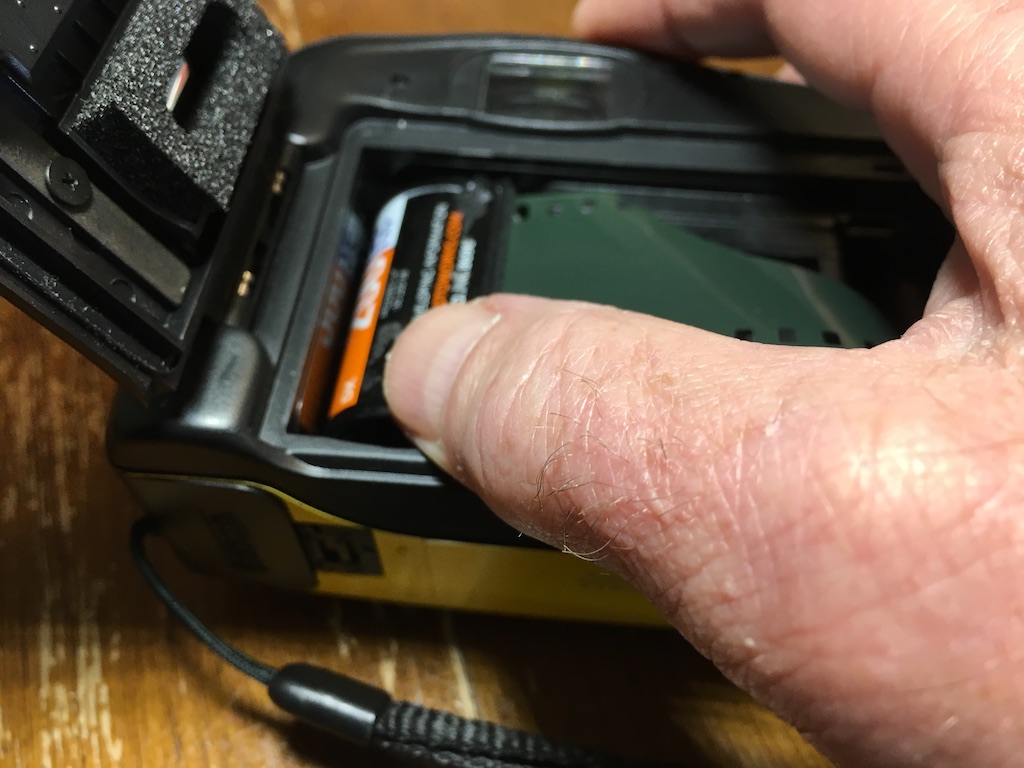 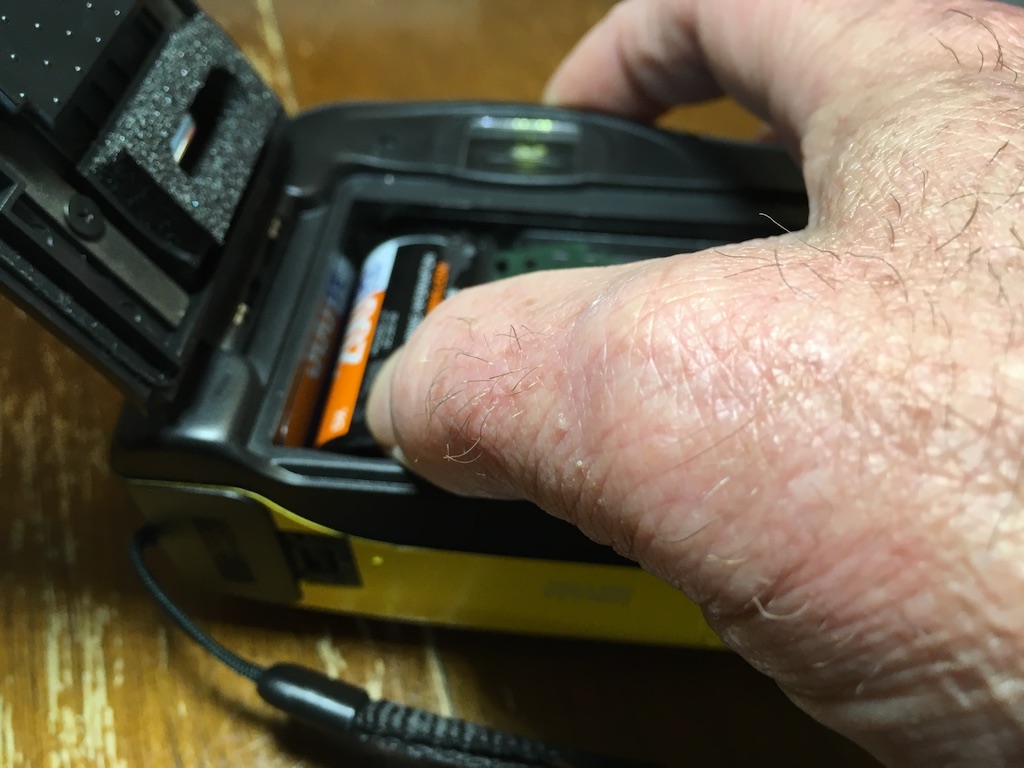 Push a little more until it clicks into the metal clip at the bottom of the chamber. 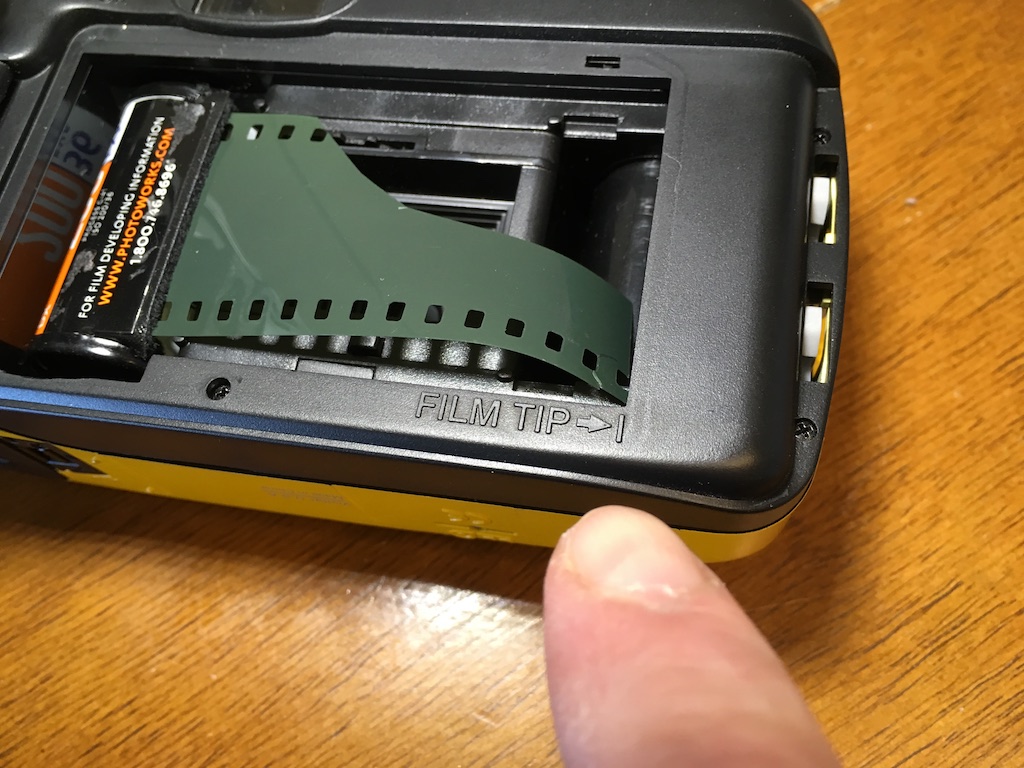 Pulling out the leader to the mark may not be enough. This is a home cut leader in some scrap film but it’s the same for factory film. 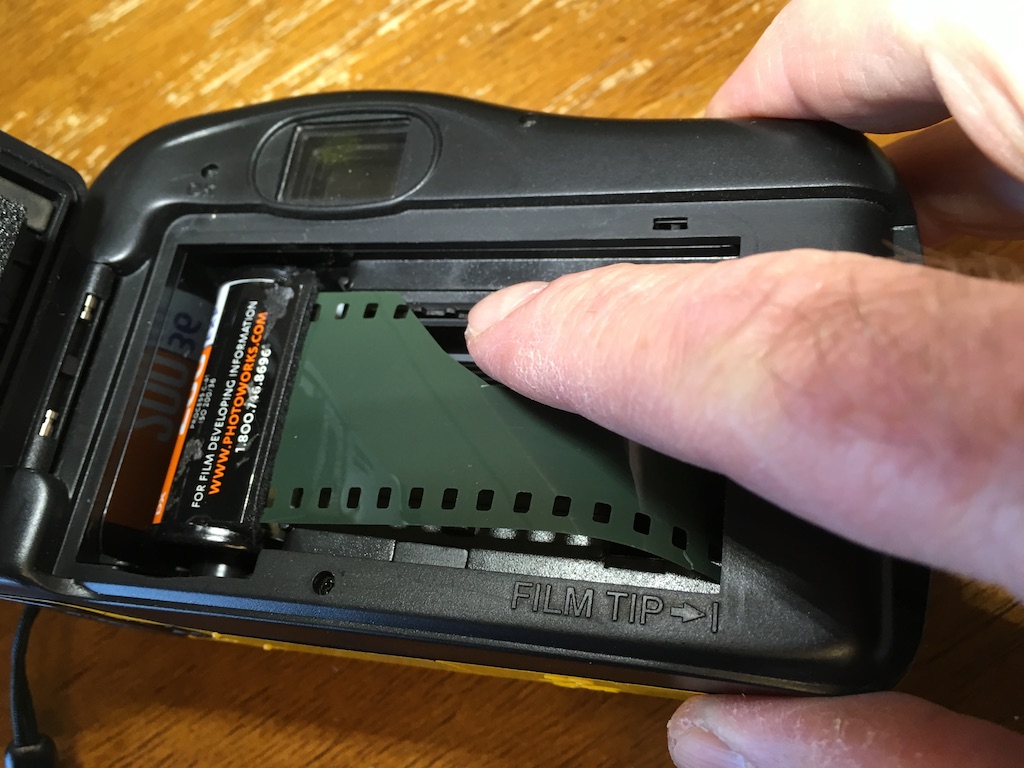 The sprocket holes at the top of the film need to be over these cog teeth. 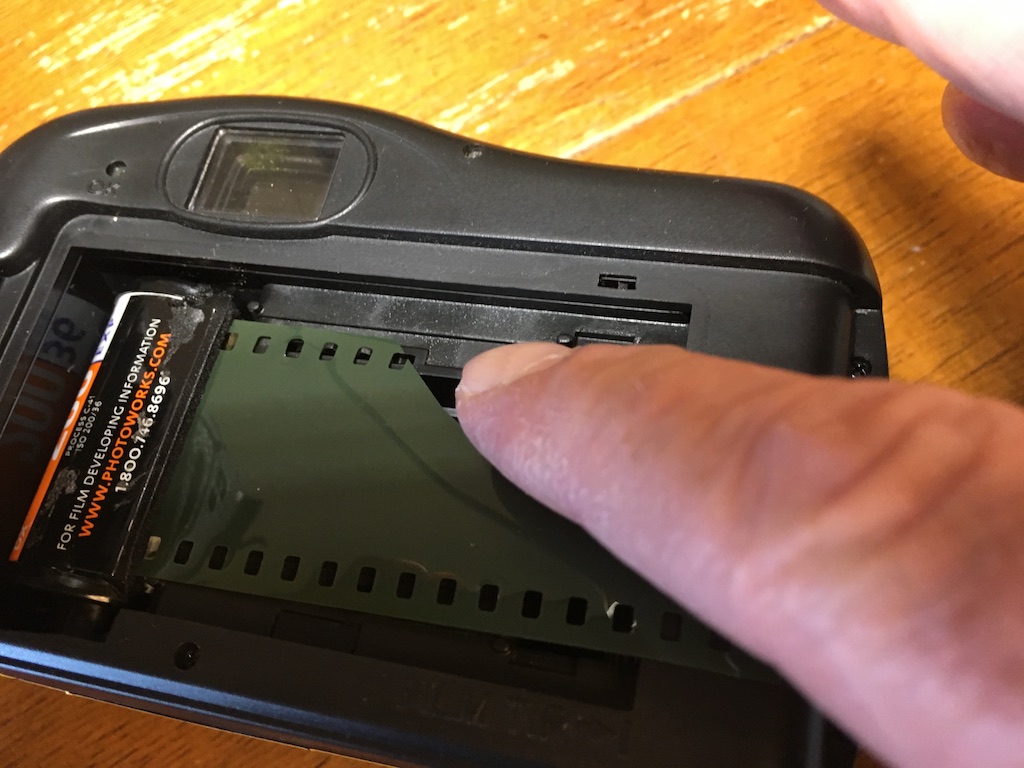 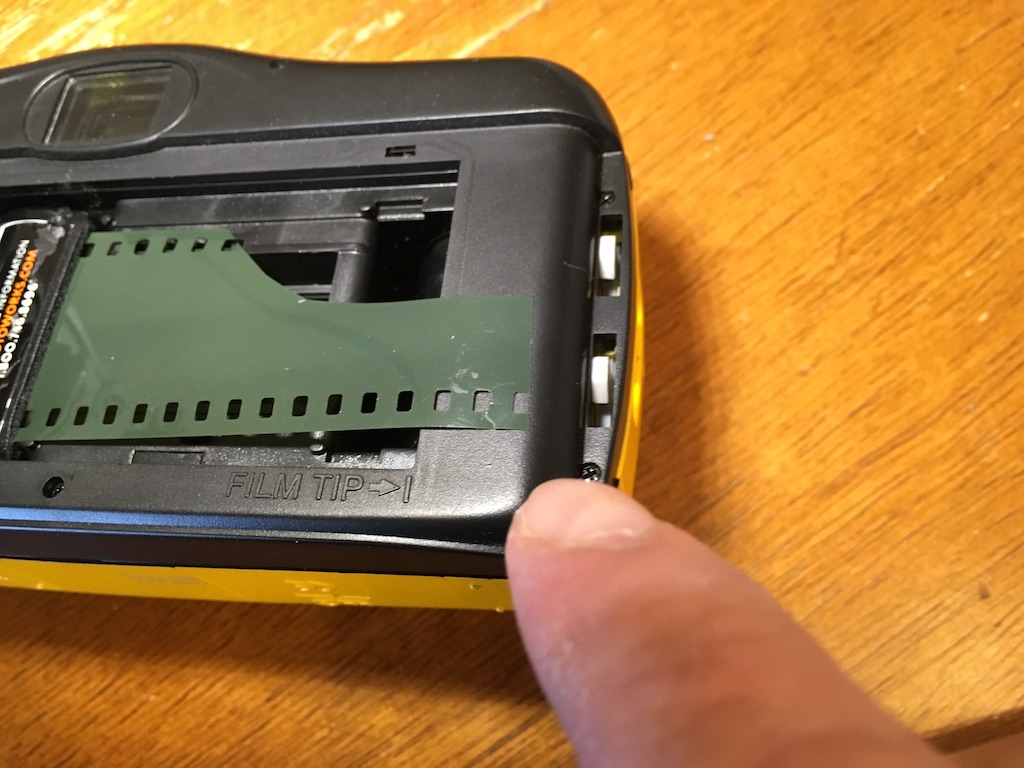 To reach the cog teeth, you may be past the leader mark. It’s OK. 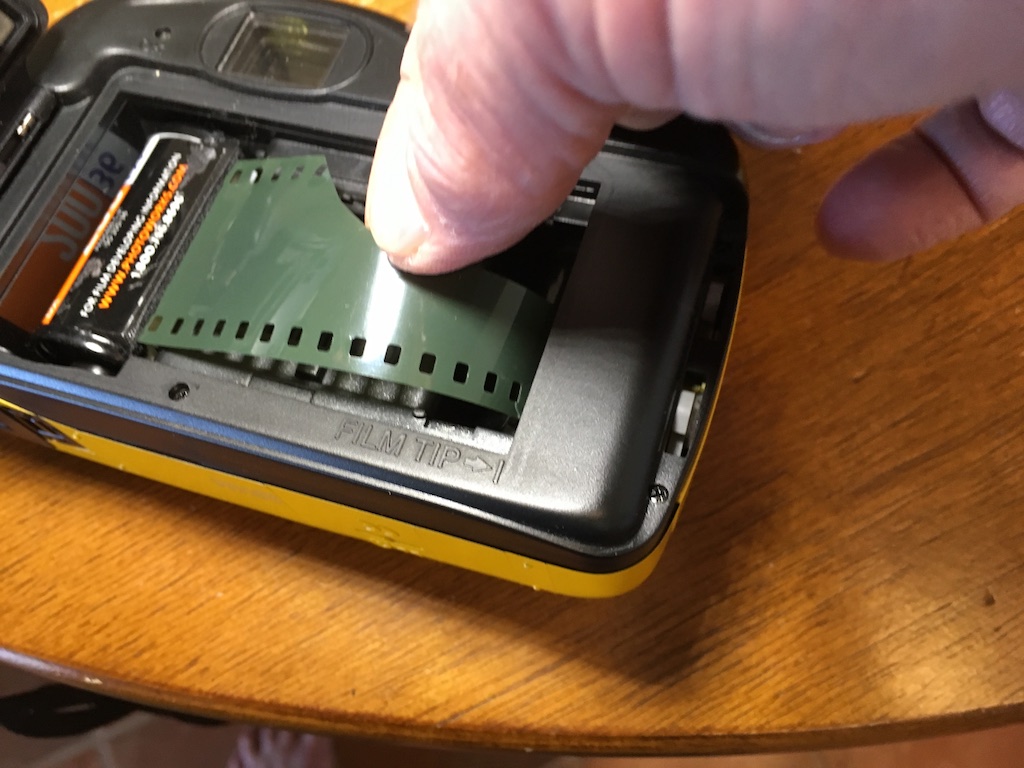 The leader goes over the spool and into the well at the right of the spool. 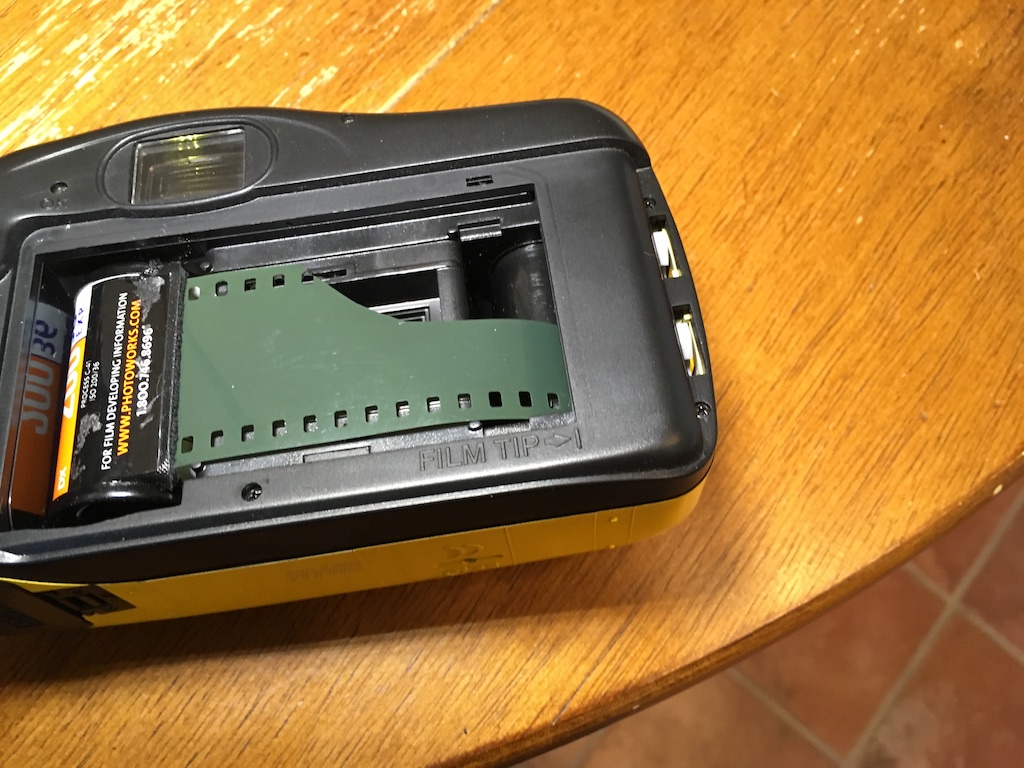 Ready to close the back.

I thought I remembered it automatically advancing to 1 but mine isn’t. It may be because I kept opening and closing the back while I took pictures. There is a back-closed switch and a film detection switch so it knows when to stop rewinding. If it does advance, great. If it doesn’t, fire a couple of shots until the film counter is at 1. If the film counter isn’t moving as you hear the motor advancing, the film isn’t loaded over the cog teeth or it may not be grabbed by the take-up spool. You’ll have to open it up and re-do the leader placement.

The sensor apparently adjusts the flash. The film is 400 but it’s lost speed with age so probably more like 200. Indoor shots are underexposed so the scanner pumps up the gain so I get film grain plus scanner noise. Still, not bad for a cheap camera and cheap, old film. 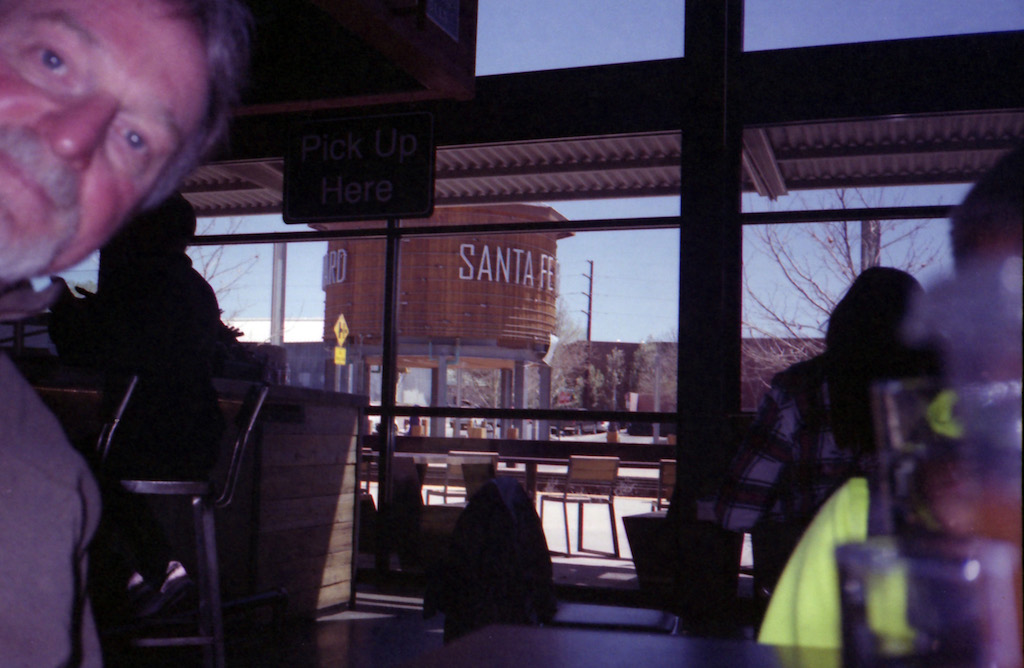 The munchkin took this one. 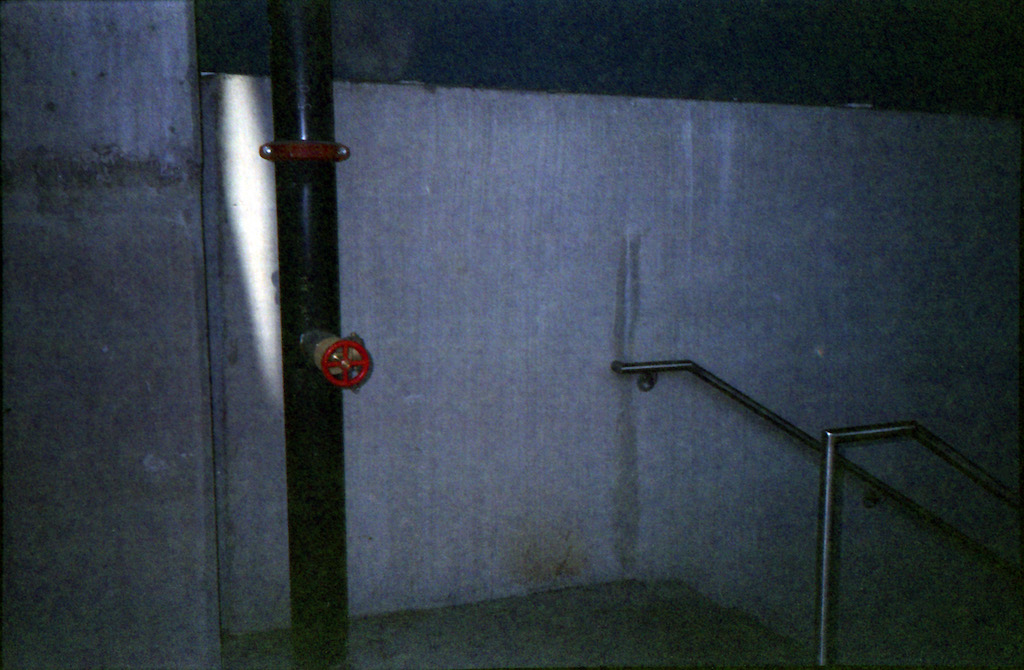 Stairwell coming out of the city parking garage. 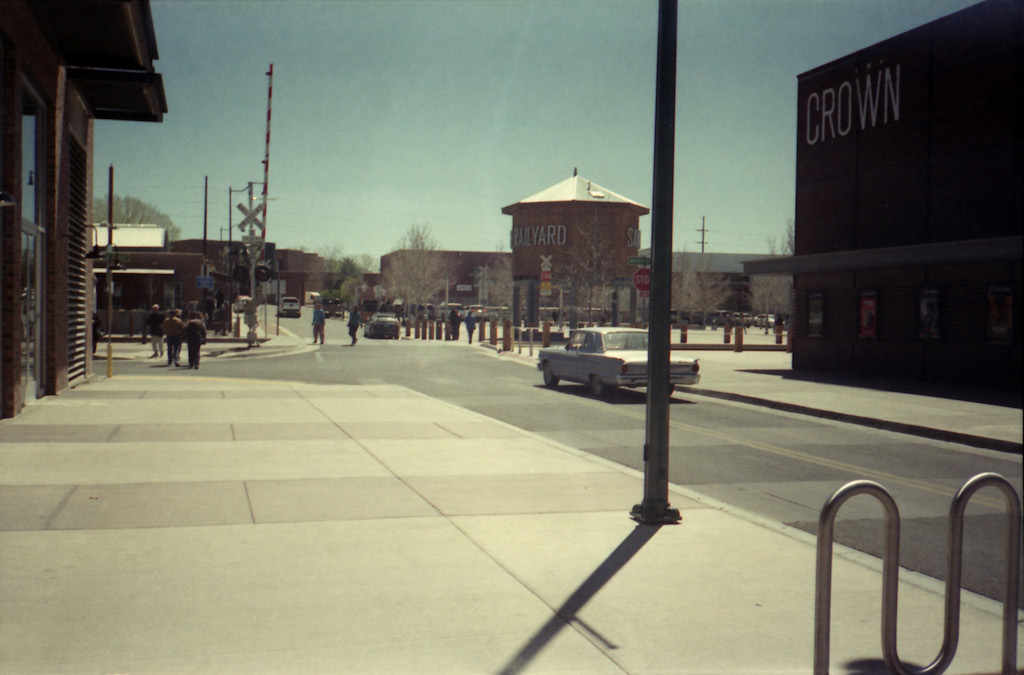 My timing was off and I split the car with the pole. 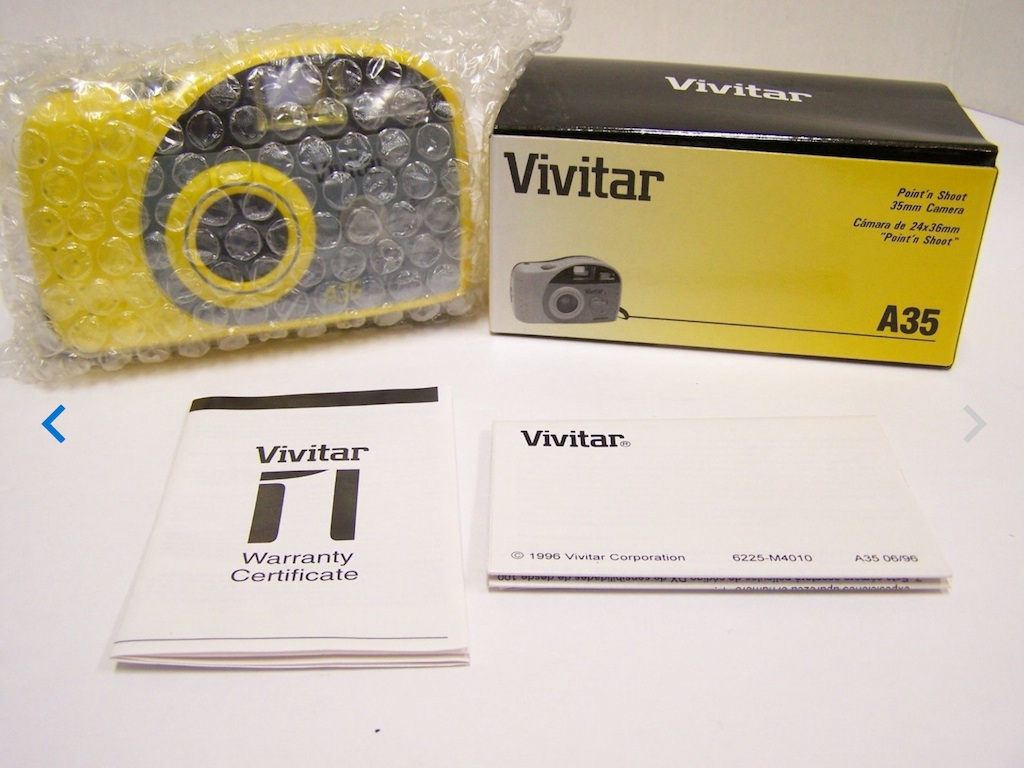 The auction ad showing the manual copyright date and the box showing that the camera was sold by itself.

This next ad might be able to claim accuracy on technicalities. The shutter could be accurate at all of its one speeds. It auto-focuses at the one, fixed, focus setting. Maybe there were variations and some cameras came with an f/4.5 lens.

This same info was in several ads by different sellers.

ISO info from a picture of a manual page in another ad.

Kudos to QVC for advertising with accurate information.

The fugly beast itself. 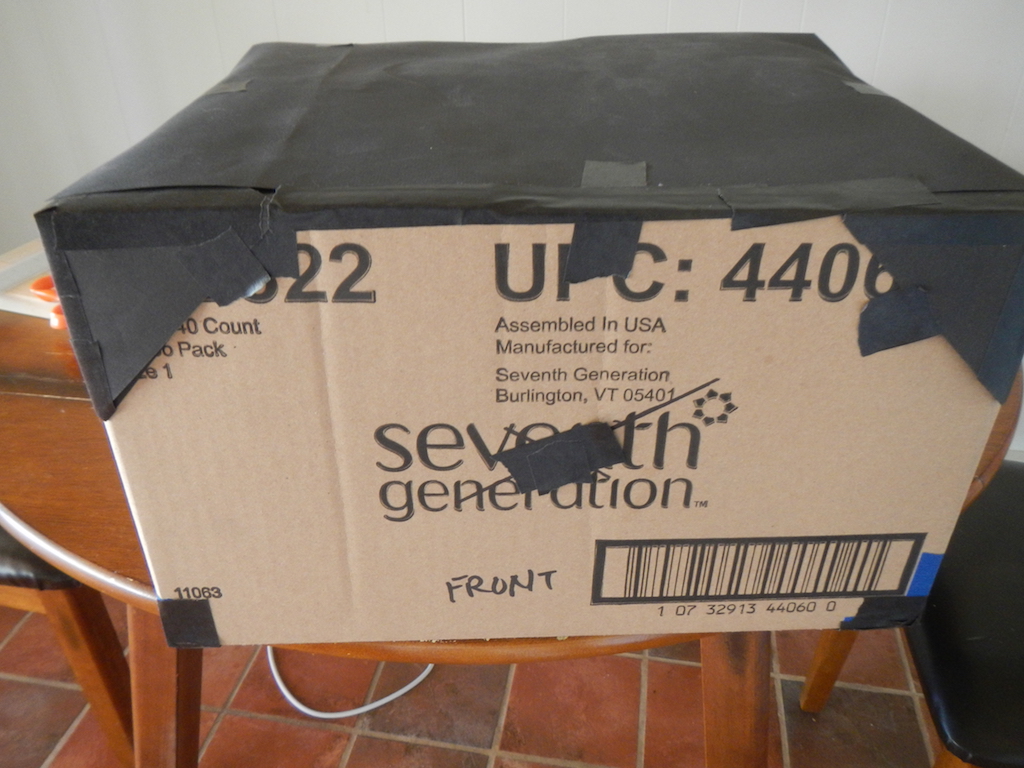 Not a lot to show — I only took the two images. 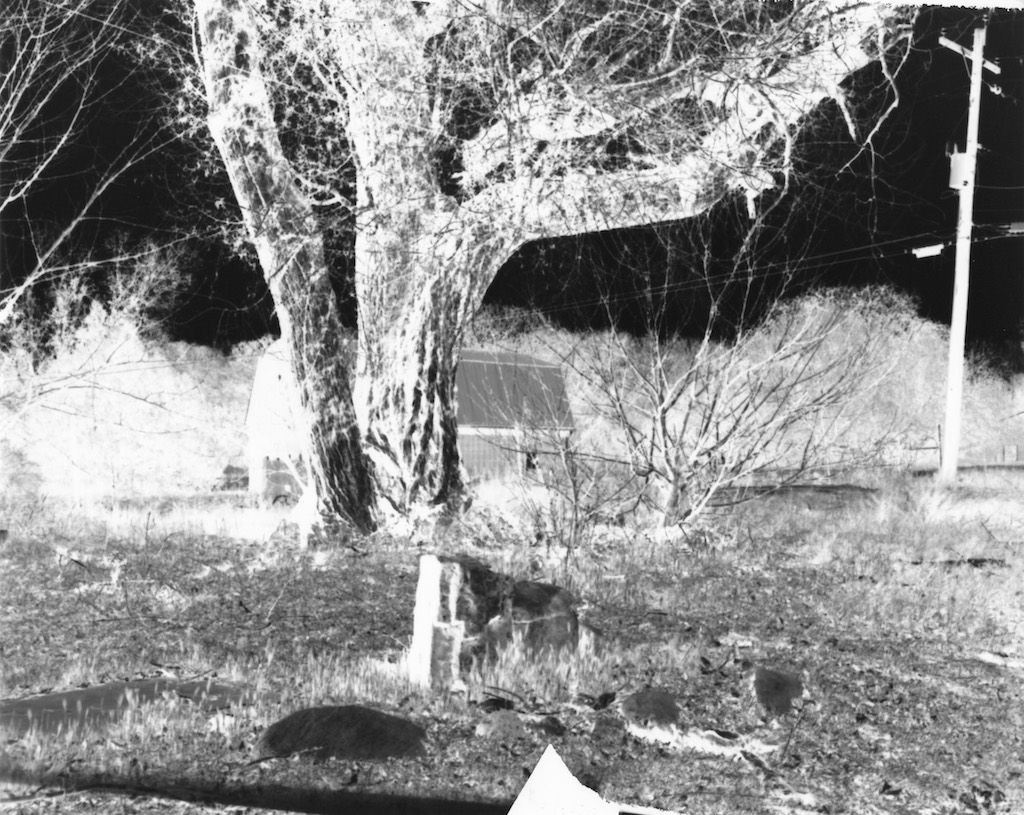 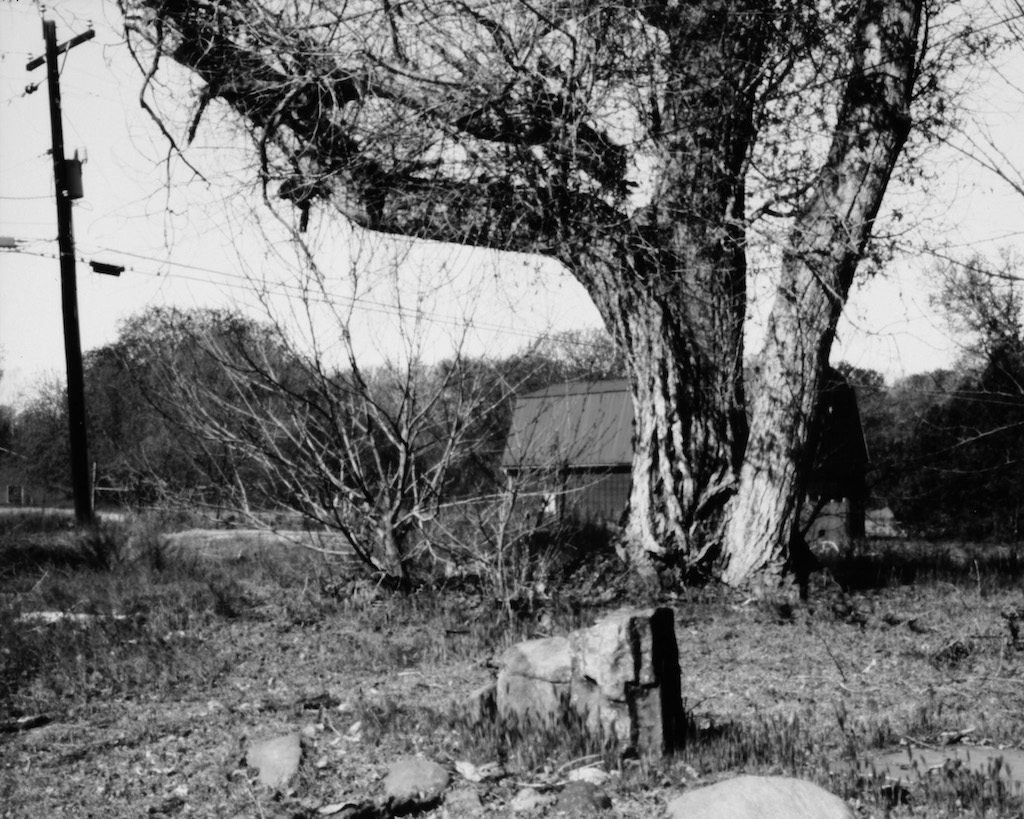 This old cottonwood is 95% dead but the birds love it. 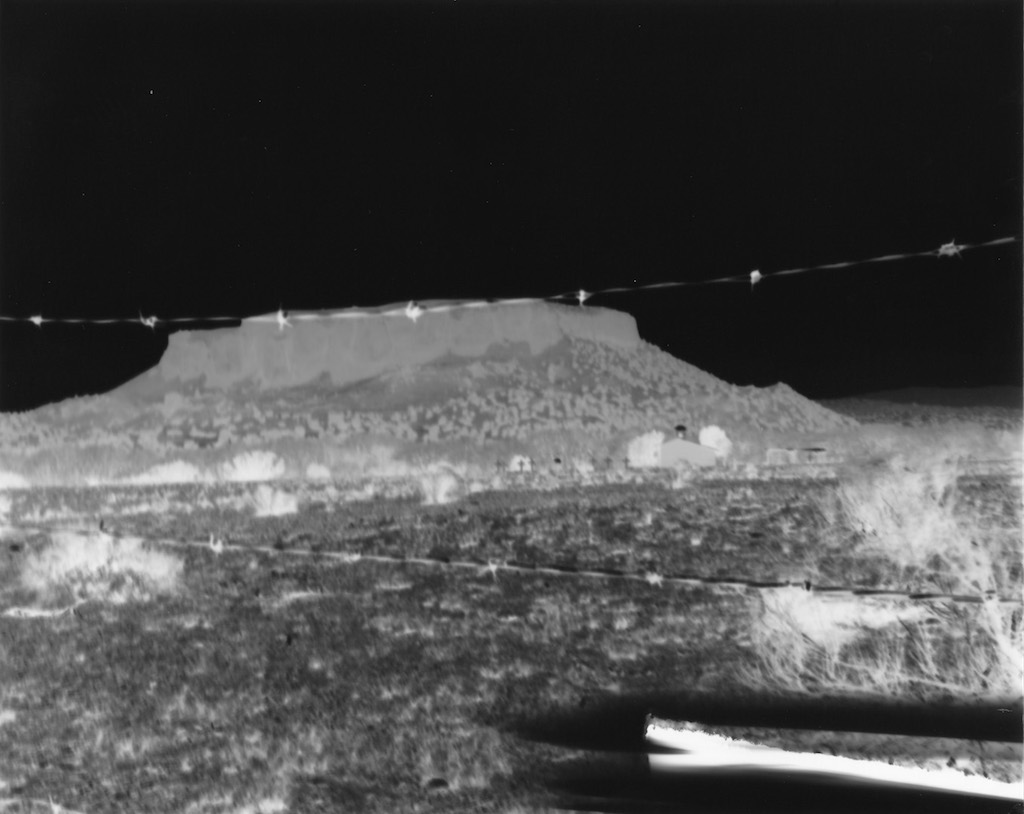 The wind was trying to steal the box so the paper tore and the flaps got in the way. 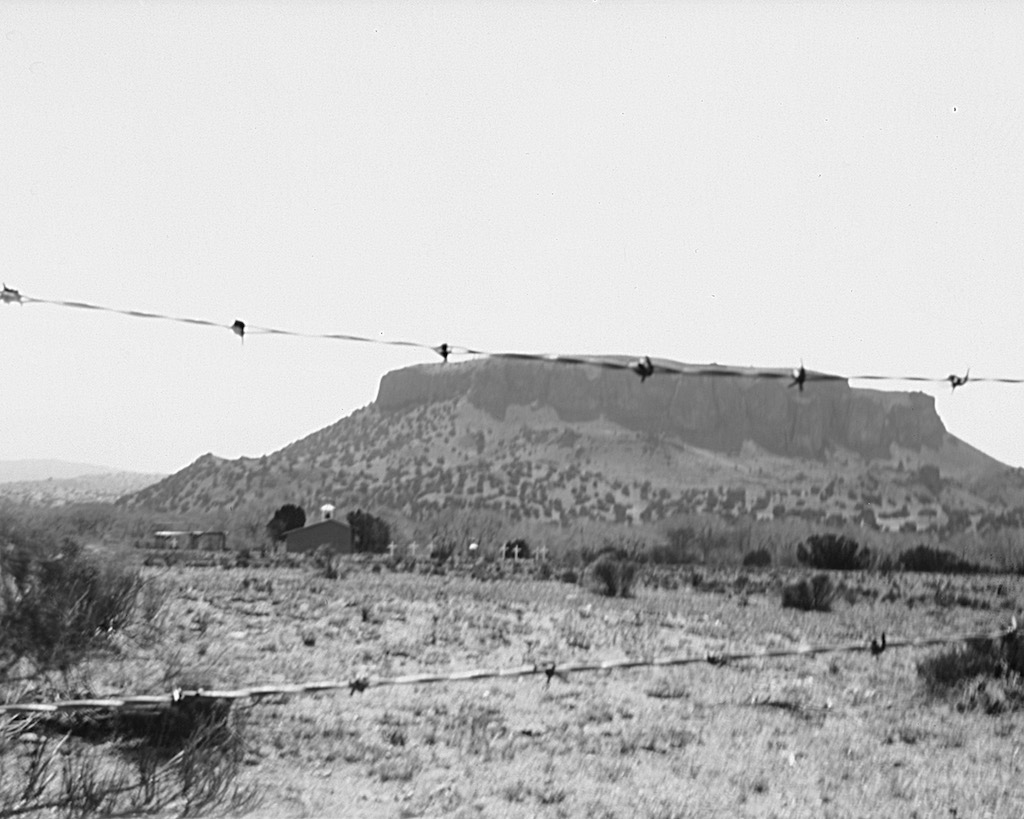