I recently acquired an old Canon Digital Rebel. I don’t have a charger yet so I haven’t used it but it has a CompactFlash card in it with images from July 2013 to August 2015.

Whoever the photographer is, I hope she sticks with it. 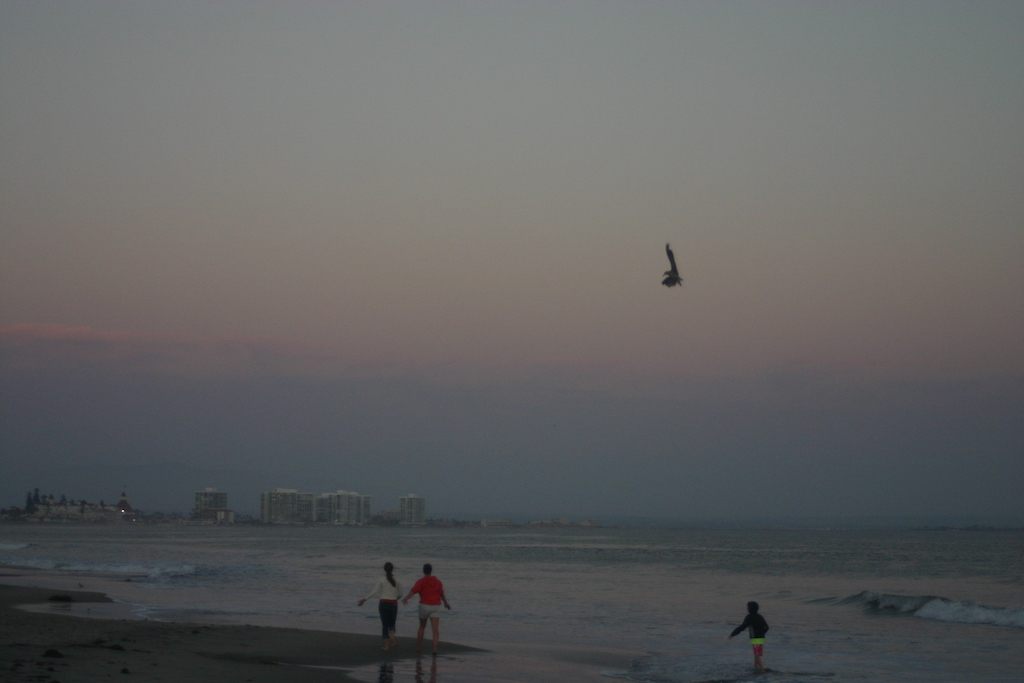 Probably San Diego based on a ship in another image. 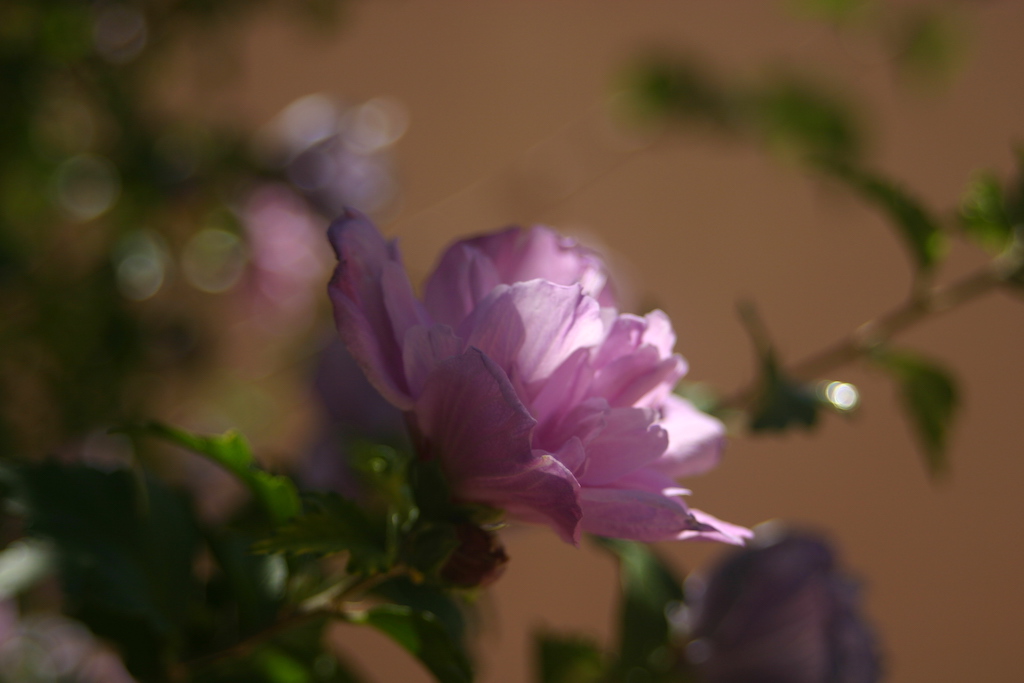 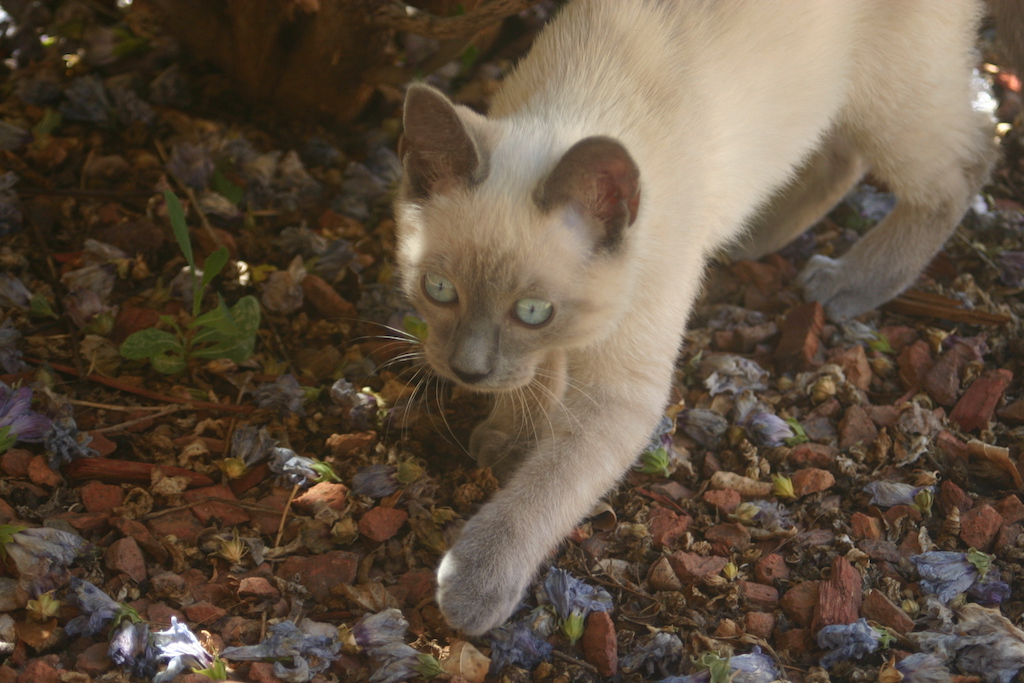 A person of discerning taste I see. 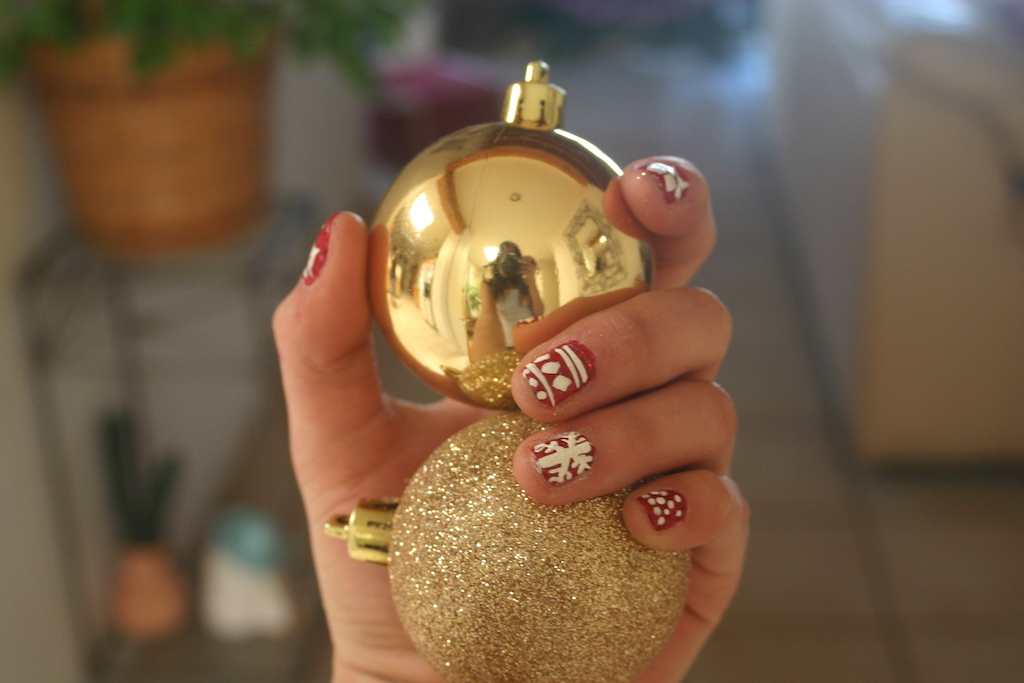 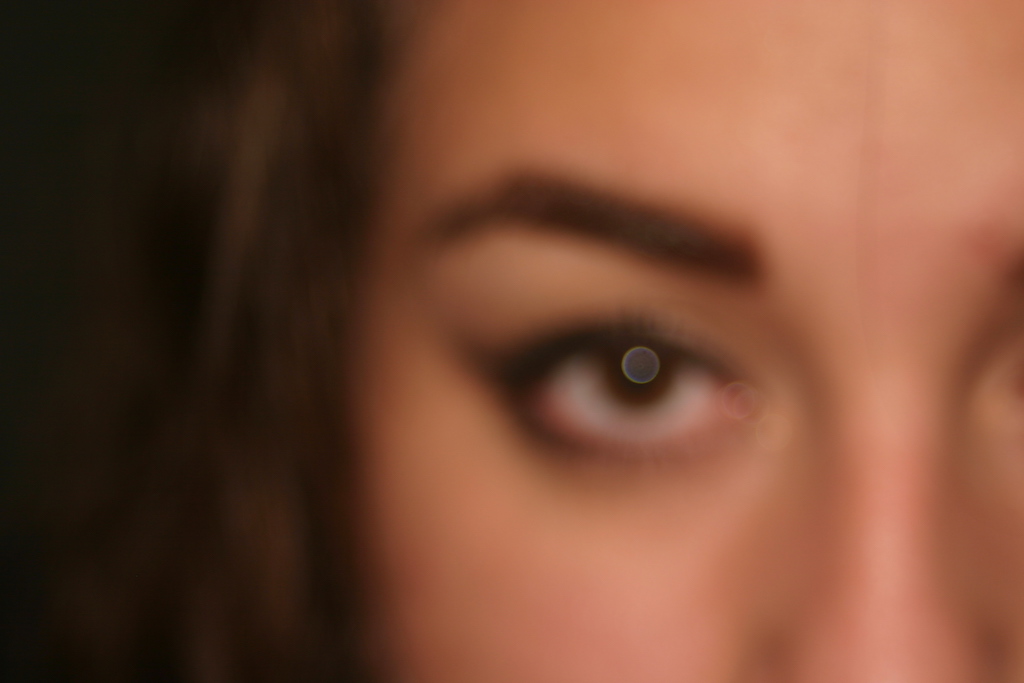 Out of focus but this is a cool shot. 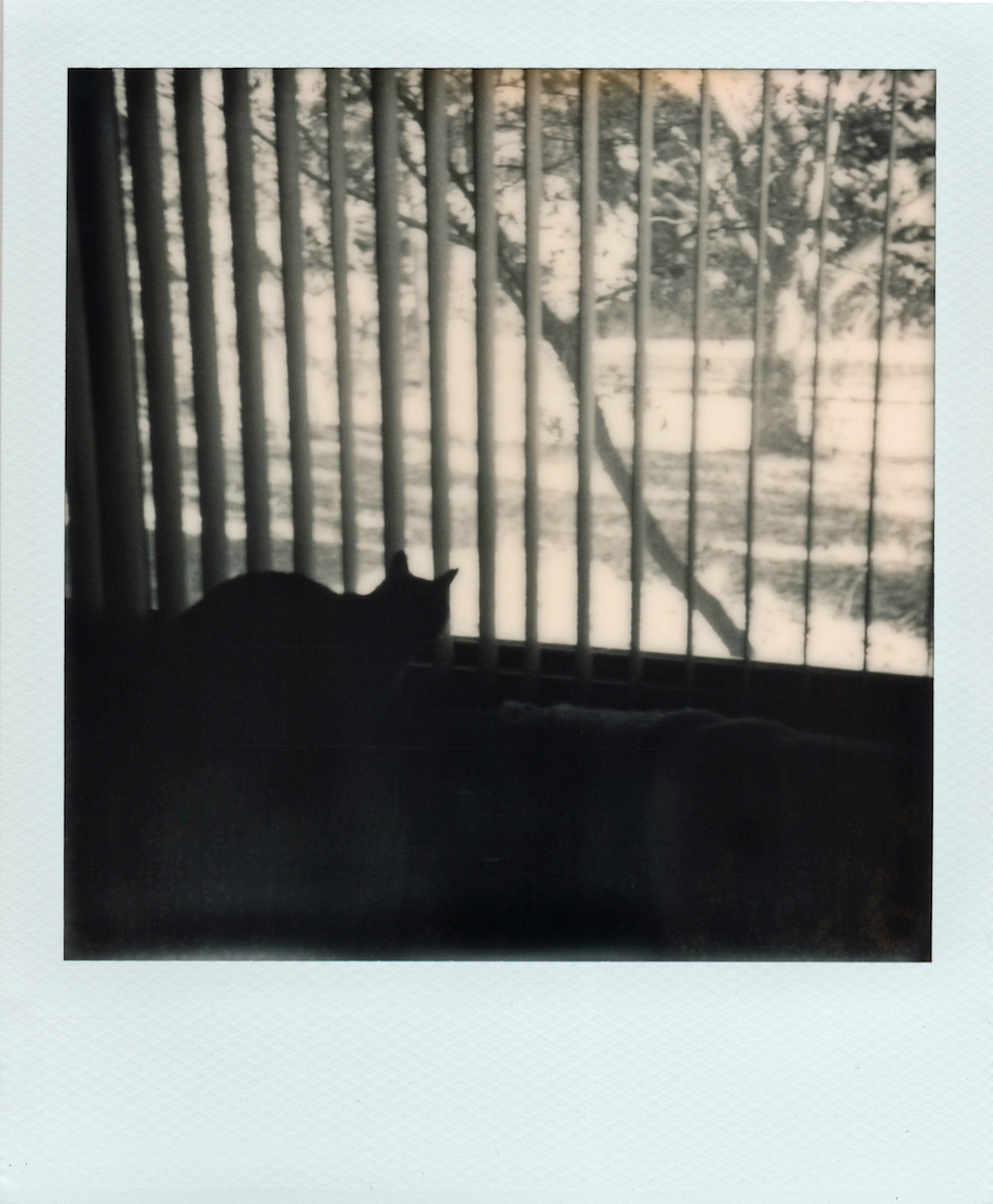 Goober thinks he wants out. 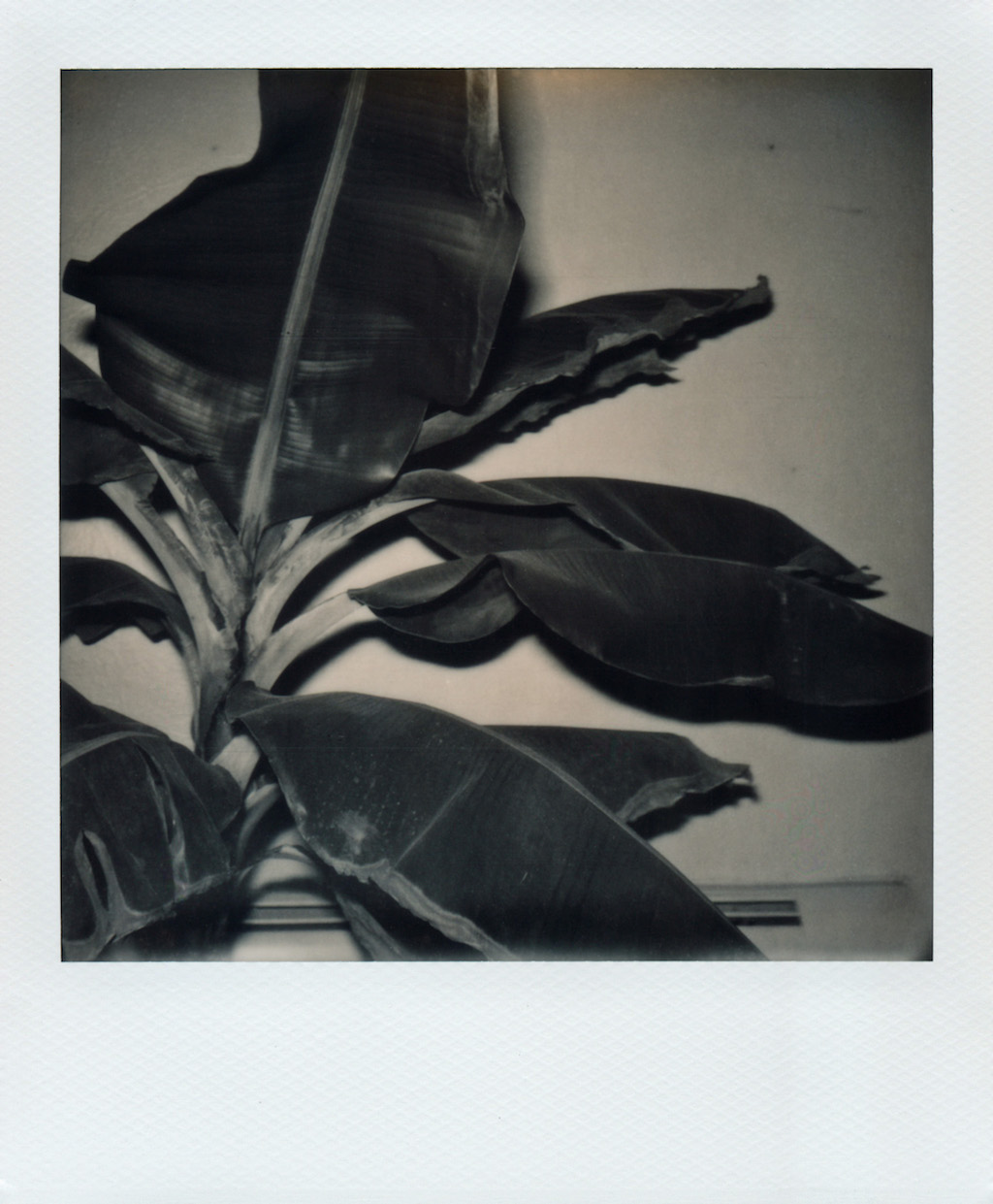 Banana tree just might make it through the winter. 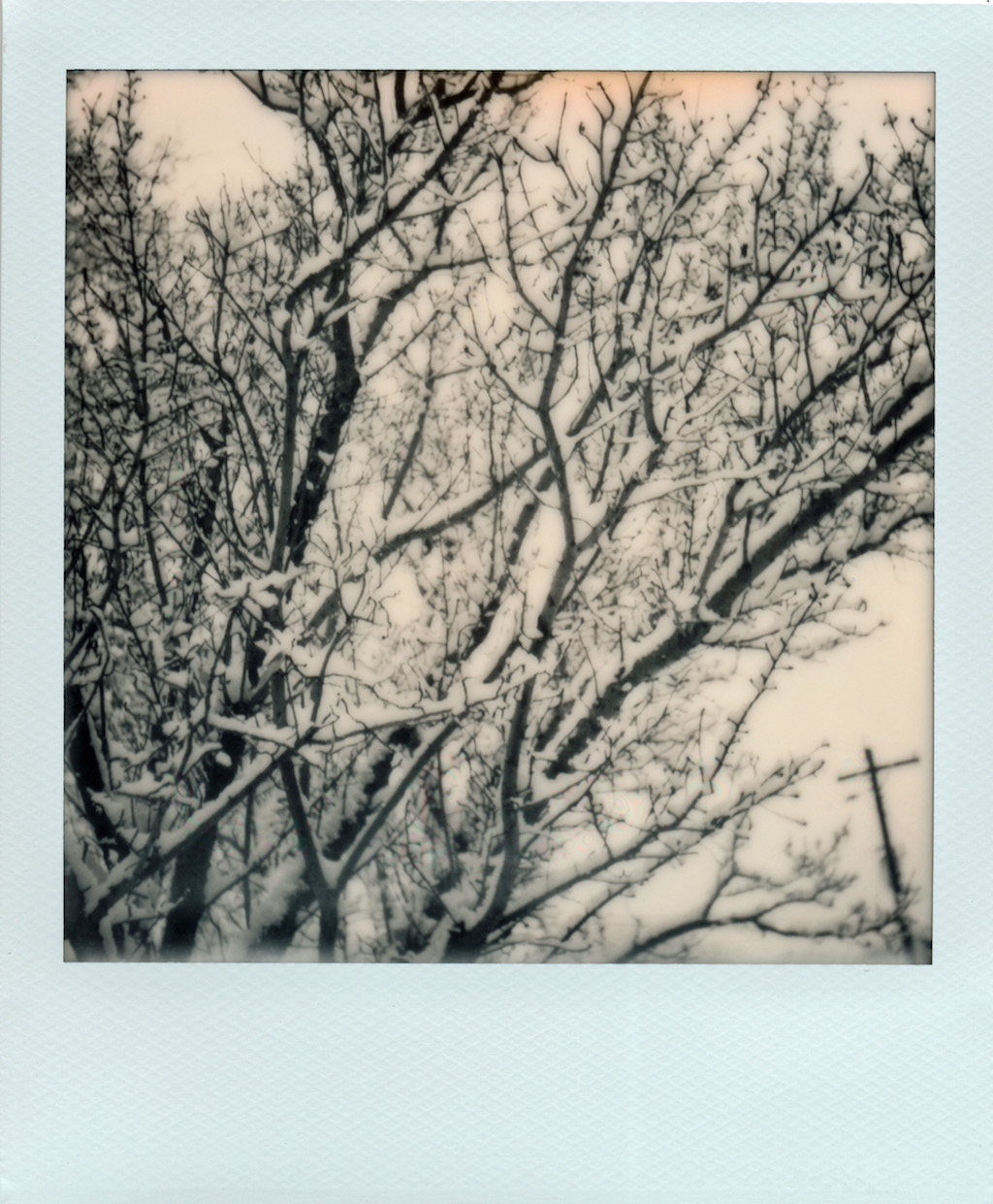 Some moiré from the plastic covering on the power pole.

I finally caught up with all the slide film I shot last fall. This is not the Retrochrome/expired Ektachrome. This is fresh Fujichrome Provia 100F.
Scanned at 4800DPI on the CanoScan 9000f & resized for the web. 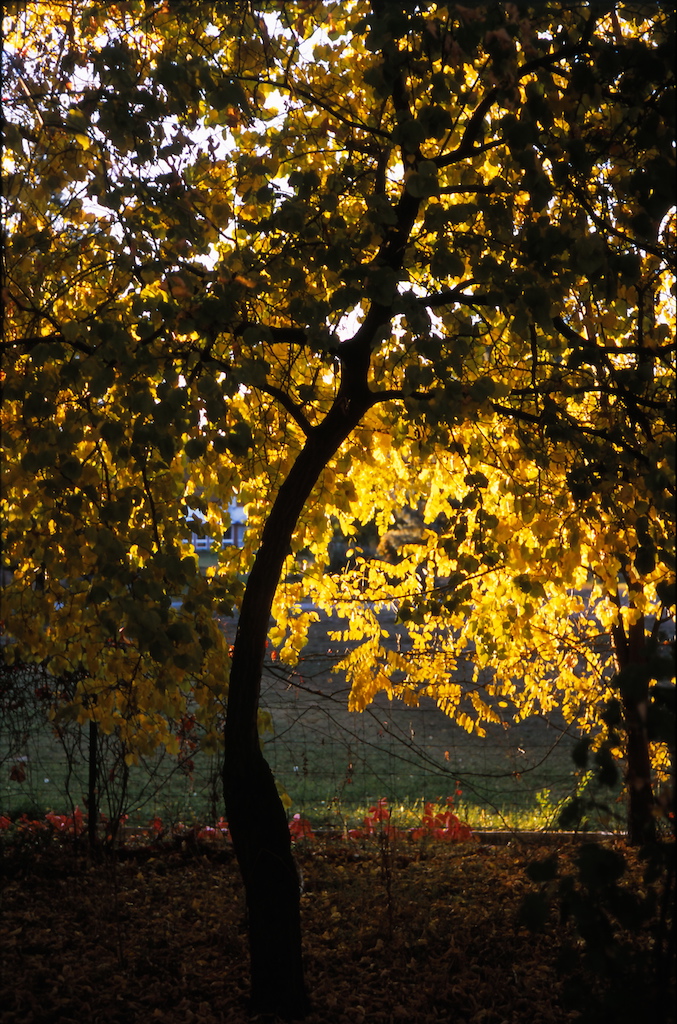 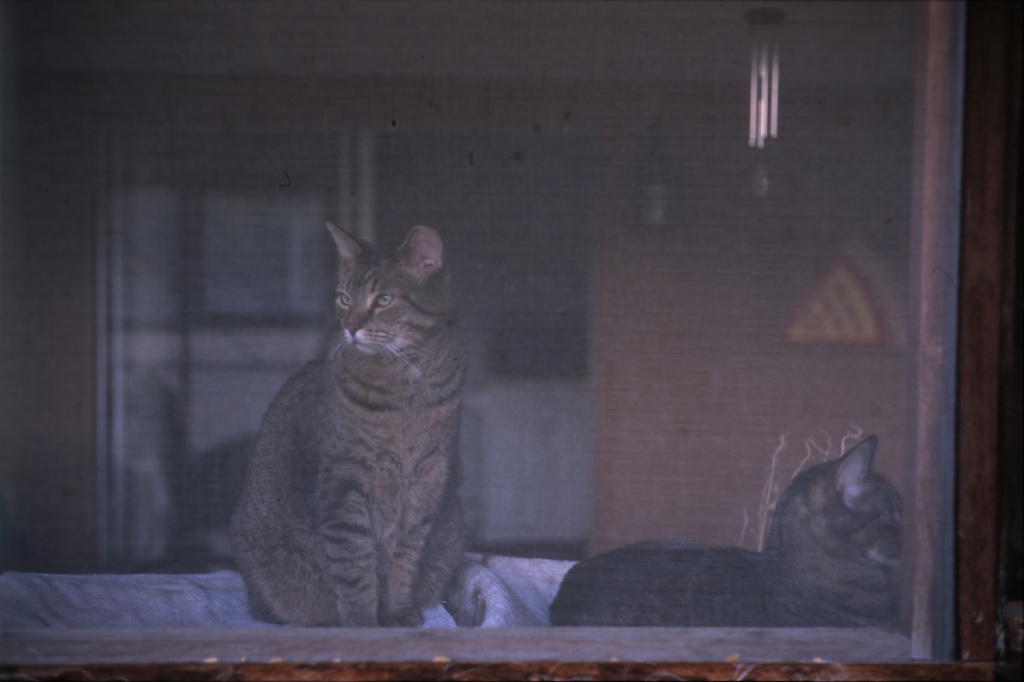 The stripey bros – Jem and Goober 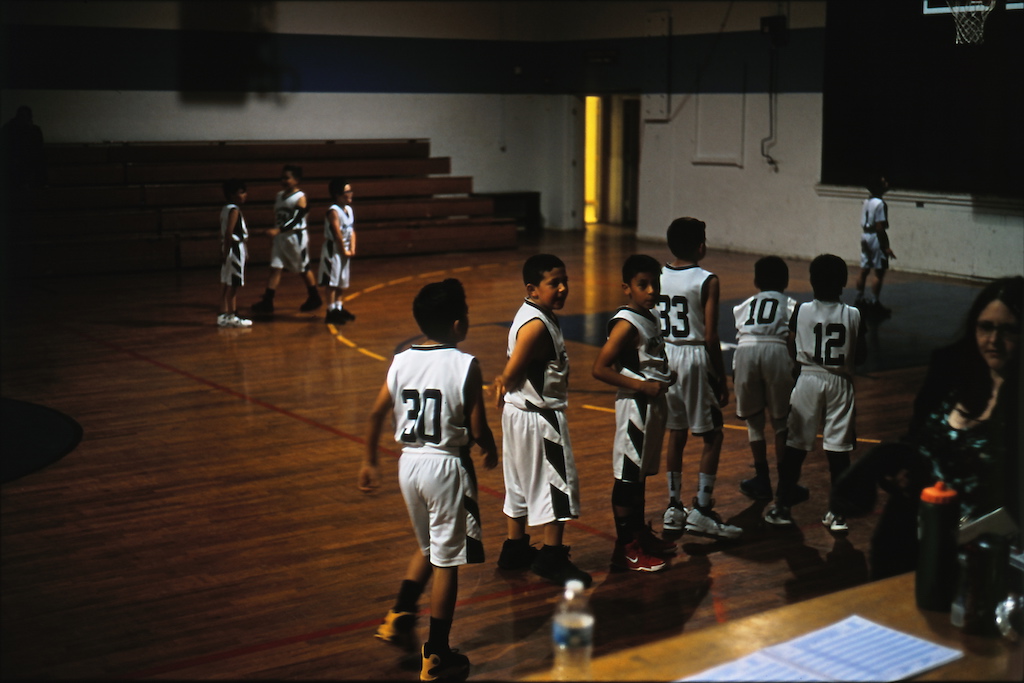 Not bad for indoors, handheld, and ISO 100

Update 1 March 2019
Trying to date a print I found with the camera, I looked up the date codes on the back of the positives. The film is not as old as I thought. It’s Type 667, the successor to the 107C film referenced below. Using the documents from the Phound Photo entry, the B&W film with manufacturing code E1V142801H is:


I got another pack film camera, a 100 with the Zeiss rangefinder from a 250. It had a pack of Polaroid Type 107 3000 B&W film in it. I pulled one on the very long odds that the developing pods might be good. Nope, dry as a bone. I put a battery in the camera and tried the shutter and it seems to work fine.

I pulled the shutter test frame out of the camera in a dark bag and tried developing it. I’d read somewhere that you could develop the negatives from pack film but I’d never seen an example or tried it. On one Flickr discussion group, someone suggested you could treat it like old Kodak Panatomic-X. So, I had to dig for developing info about one extinct film (according to Wikipedia, Panatomic-X hasn’t been made since 1987) so I could try it on another extinct film.

The instructions I got with the 107 film in the camera call for coating the prints. The coater-less version, 107C, came out in 1978. I don’t know if Polaroid kept making 107 after 107C came out but even 107C hasn’t been made since 1998. If I’d realized it was that old I might have saved a frame. Probably not, the first thing people do when looking at an old camera in a thrift shop is to open it. Any way, the instructions I found called for HC-110 dilution B (1+31) at 68F for 4.5 minutes.

I don’t have any normal tanks that can develop large format negatives. The Polaroid image (excluding the border) is 7.3 X 9.5cm. In one of those “buy the lot to get the one thing you want” purchases, I got a Cibachrome color processing drum (PDF manual). It was made to do prints without using a series of open trays. Cibachrome was an awesome process, direct to positive, full color prints. Sadly, I learned about it too late. It too is an extinct product.

This is the shutter test shot. Developed in HC-110, dilution H (1+63) at 68F for 9 minutes. I frequently use half the concentration for twice the time. It’s a little gentler on old negatives (old paper negative in this case) and it helps to have a little time leeway. The results are pretty similar to HC-110 B. This was a go/no-go test so getting anything was the goal. 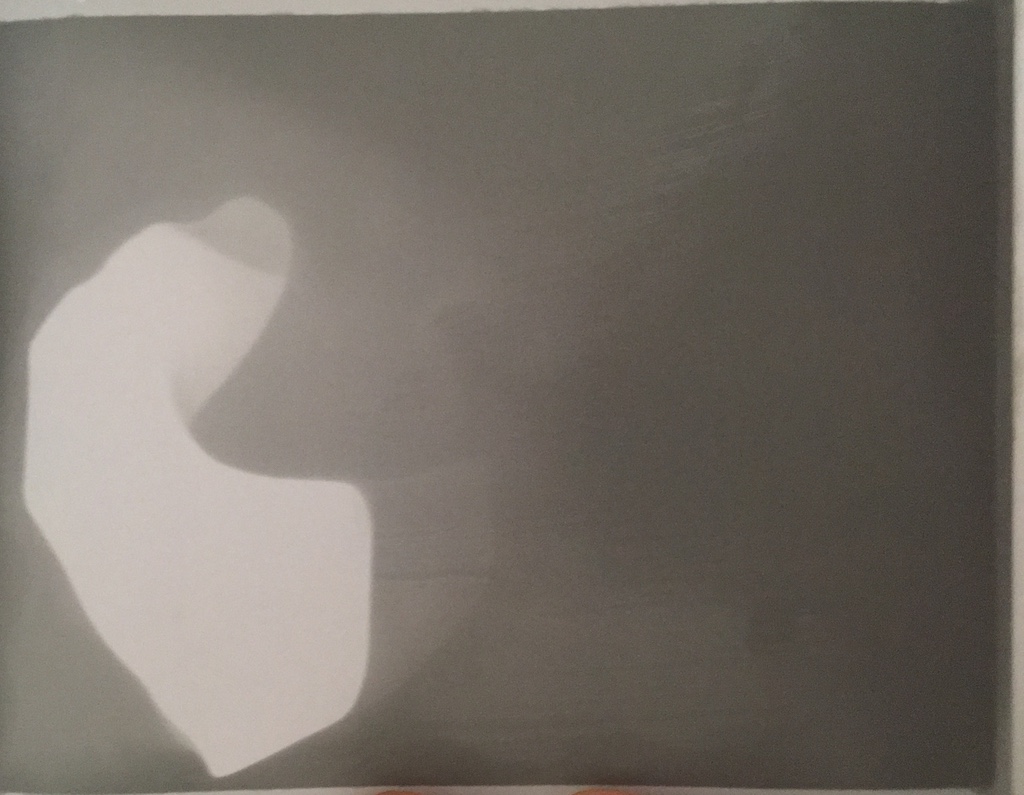 Negative image taken with my iPhone.

No idea what it is but it’s not my target, the kitchen lights. I tried bleaching the negative but all I did was take off some of the emulsion. 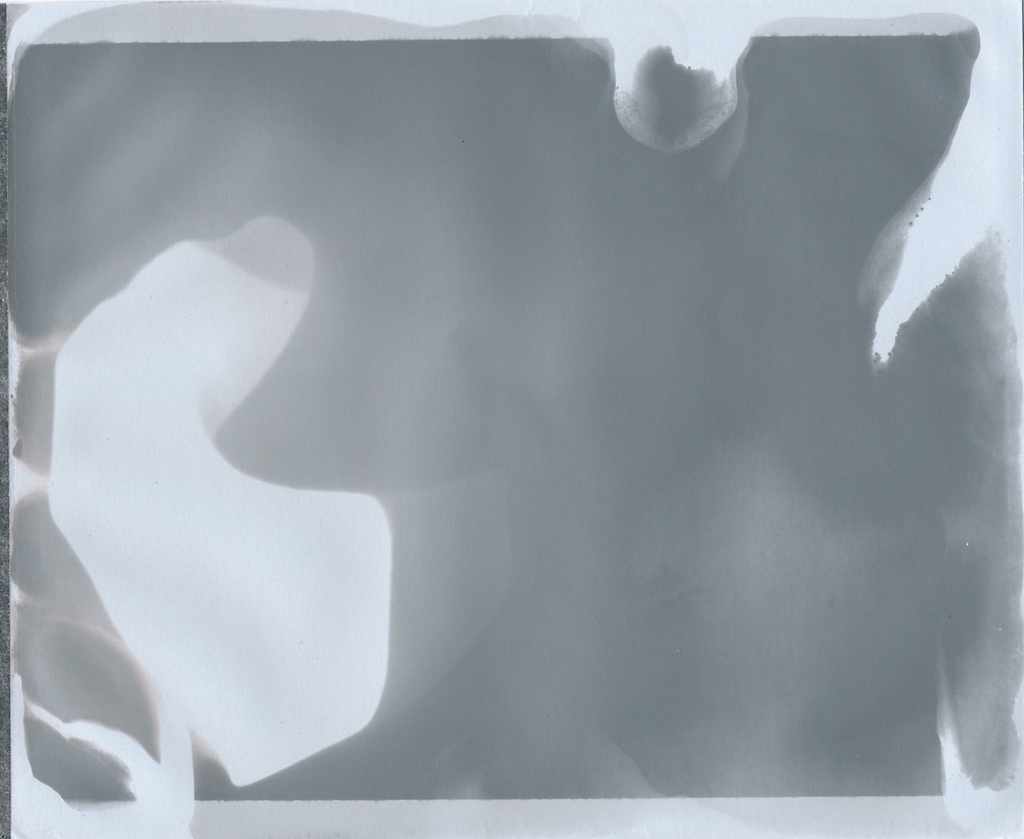 A proper scan at 600 DPI after the bleaching attempt. 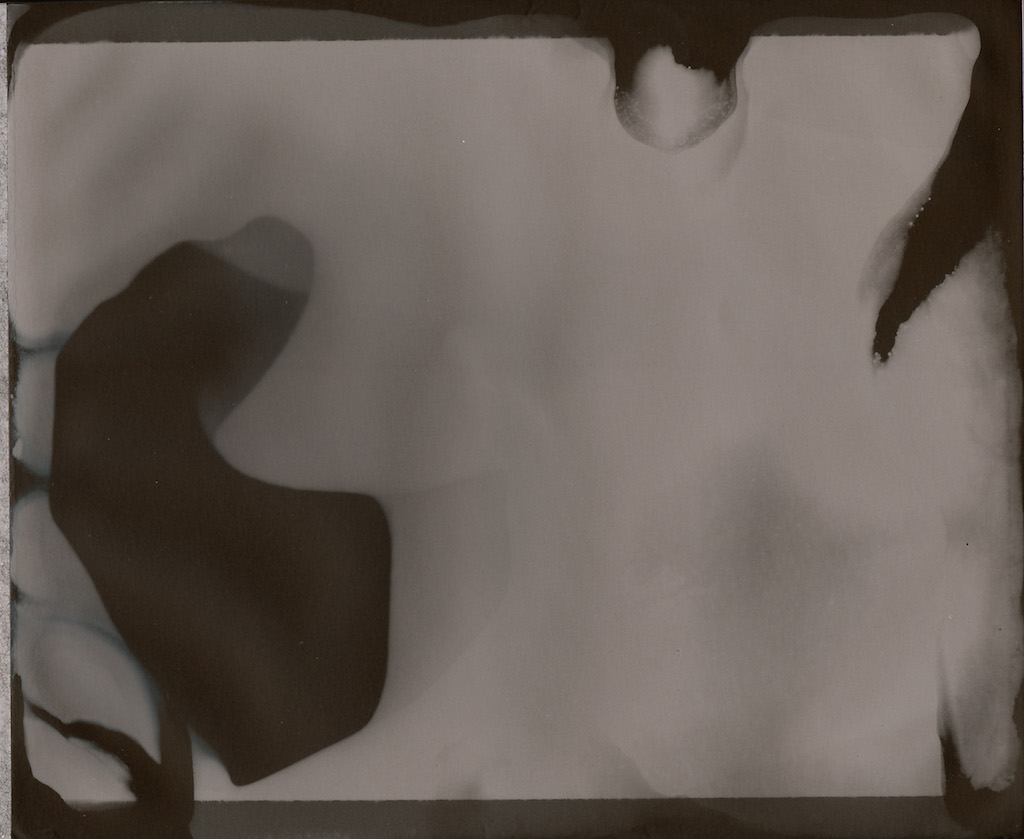 The scan inverted. Still no idea — probably nothing.

I had nothing but variables: an unknown film, shot in an unknown camera, developed with an unknown process. I know, I’ll use a different camera I haven’t tested!

I pulled the remaining three frames out of the film pack and put them into a light tight box. Wrangling a Polaroid and a box in a small changing bag is an exercise in patience. Once that was done, I removed the extra paper, developing pods, and positives, leaving just the negatives emulsion side up (I think) in the box. The next magic act was getting a negative out of the box and into the test camera, a Kodak Autographic No. 3A (1918-27) which is nearly as big as the Polaroid.

I shot a test and then psyched myself out that I didn’t have the emulsion facing the subject. Just to be sure, I put the beast back in the dark bag, turned the film over and shot it again. I shot the same subject so I still don’t know if I had it right the first time.

My meter app doesn’t have ISO 3000 so I guesstimated that the film would have lost some speed and used 2500. I used the fastest shutter on the old Kodak, 1/100 second and f/16. That was really fortunate since the aperture on the camera is labeled in US (Universal System) units not f-stops. I have a screen grab of an old table comparing aperture systems somewhere. At least I didn’t have to stop everything and find it because I remembered that f-stops and US cross each other at 16

I was getting impatient so I used HC-110 B for 4.5 minutes this time. The framing is terrible but the blobs of dark on the negative are definitely the kitchen lights. 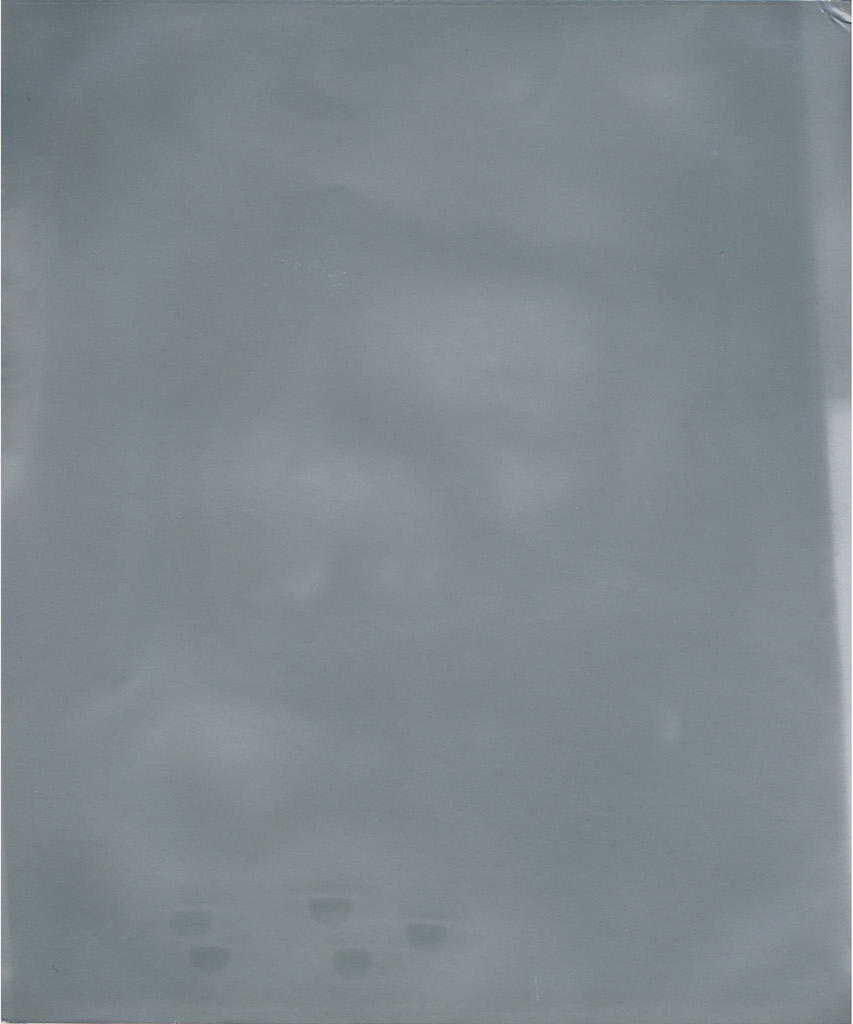 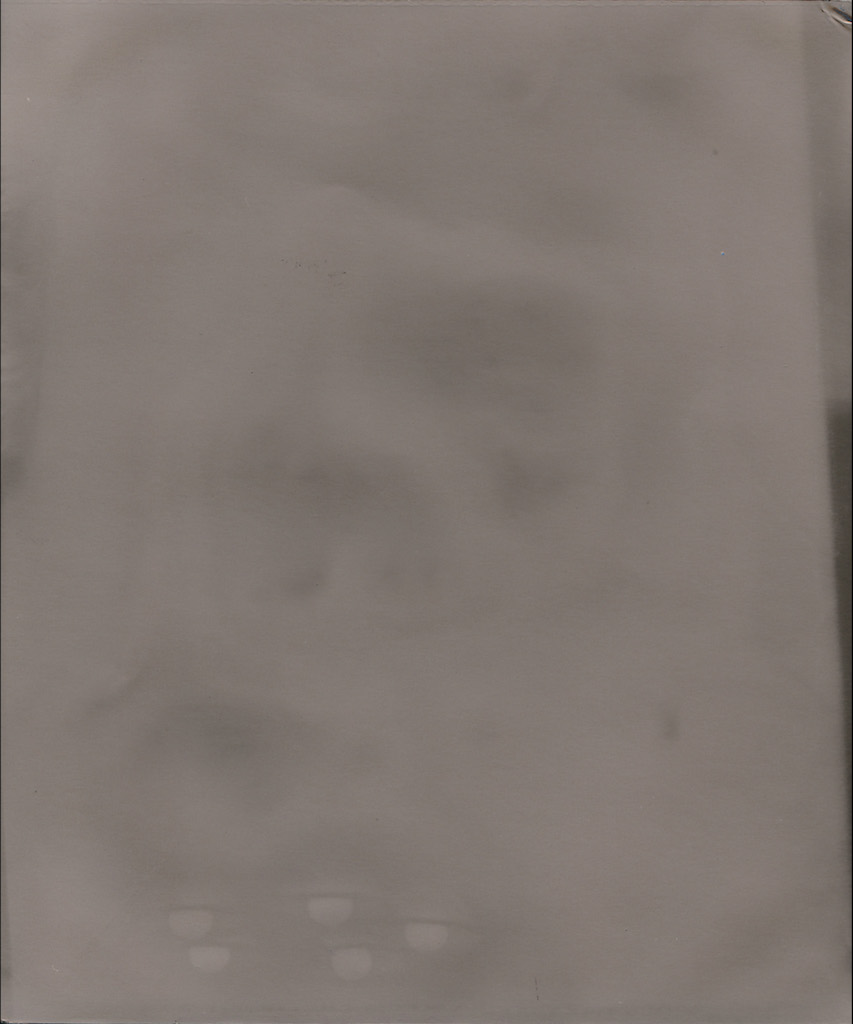 Fugly, but it’s a photograph.

Did I prove anything? Yeah sort of. I know old Polaroid negatives will produce an image. Is it useful information? Probably not to anyone but me but that was the point. Photography forums (fora?) are as bad as Apple discussion groups. There’s always some snarky little bitch who says, “Why waste time? Just go buy X”. That misses the point. I want to know. I already know I can go buy something — there’s no challenge in that.

FPP Retrochrome (Ektachrome). Scanned at 4800, color corrected, and shrunk to 1024 on the long side for the blog. 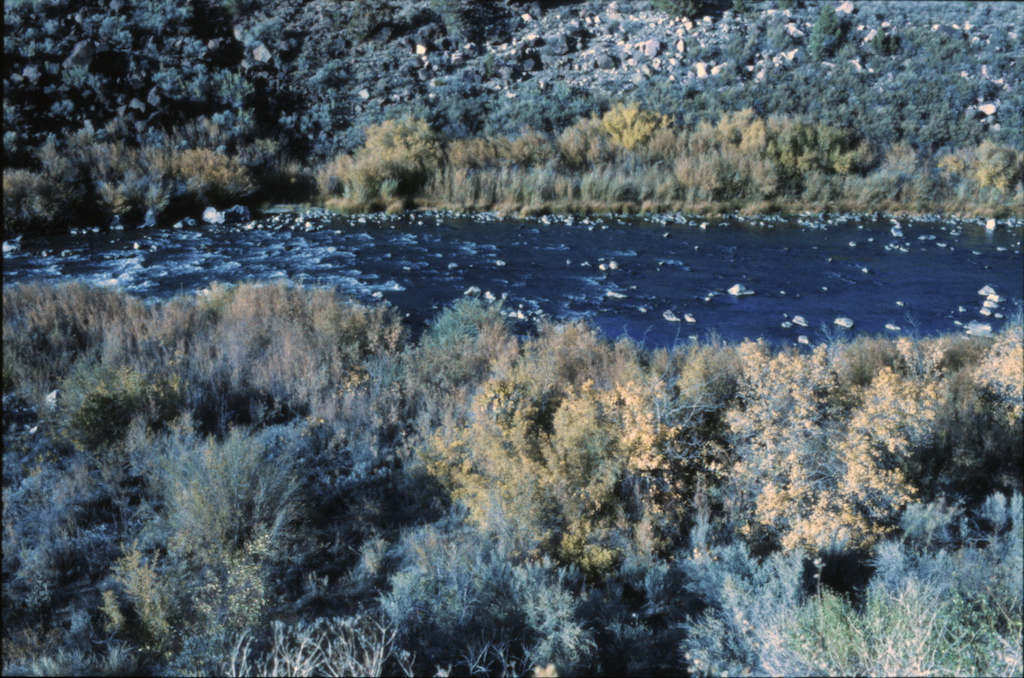 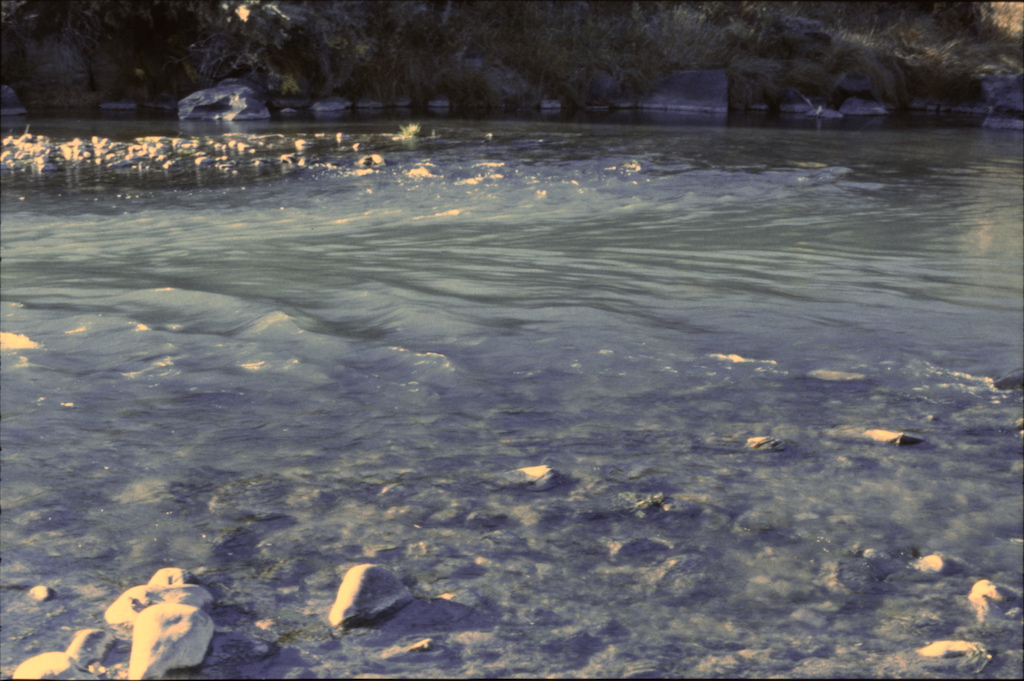 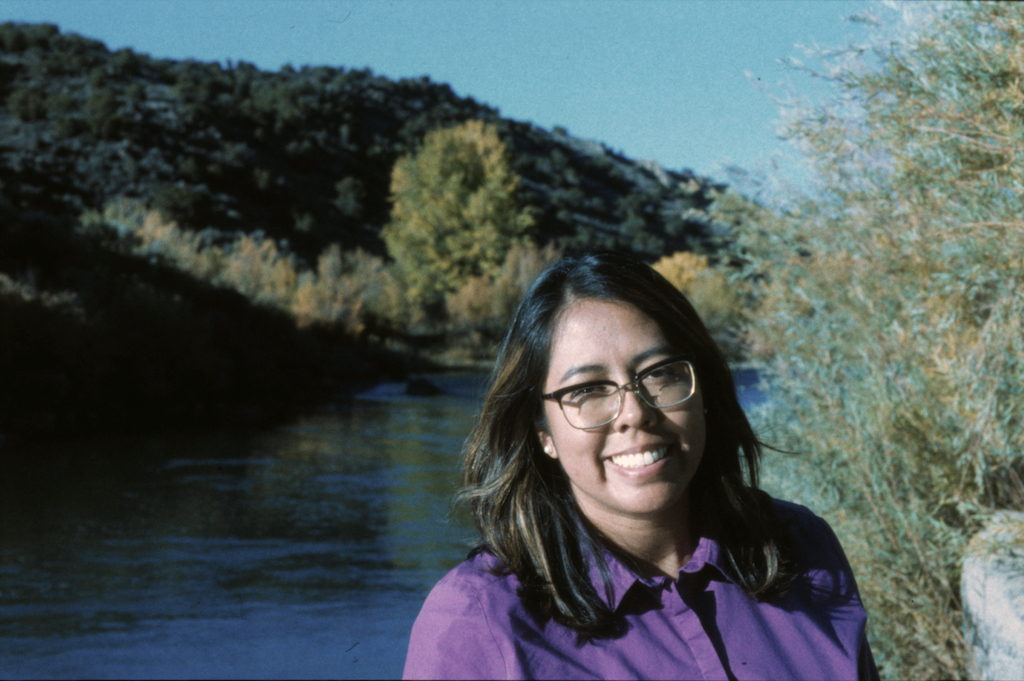 My sweetie at the Rio

Hard to balance. Ektachrome is way less sensitive to red and somewhat less to green than blue.
These are screen grabs from GIMP. 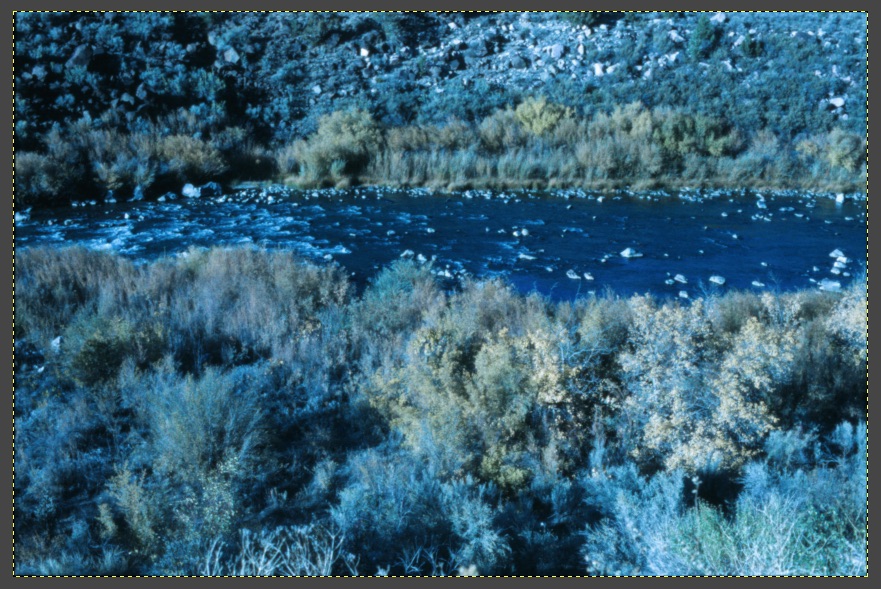 The top image above before any edits

Decomposing to the individual channels gives some interesting insight. This creates a gray scale image for each color channel representing the strength of that color’s contribution to the image as a value from 0 (black) to 255 (white). Obviously, the amount of each color mostly depends on the subject matter. 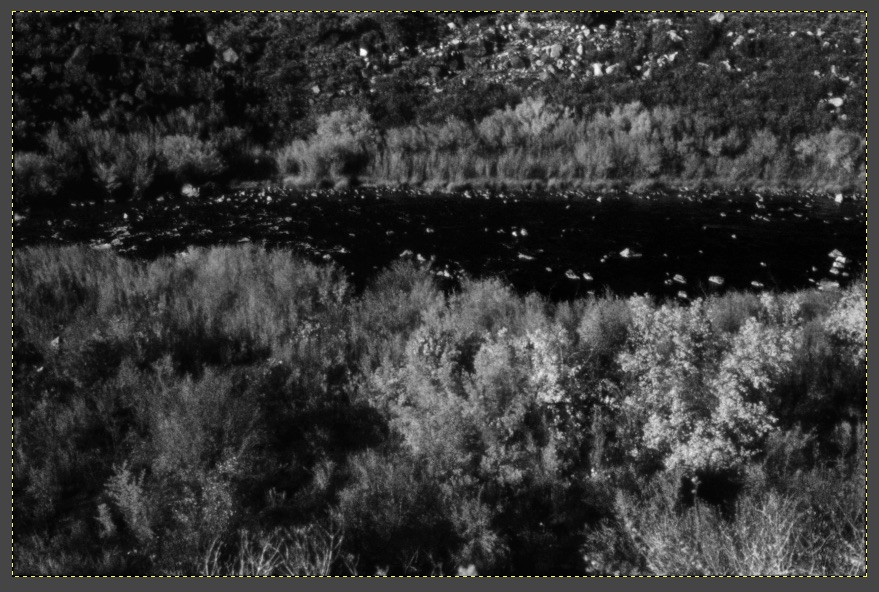 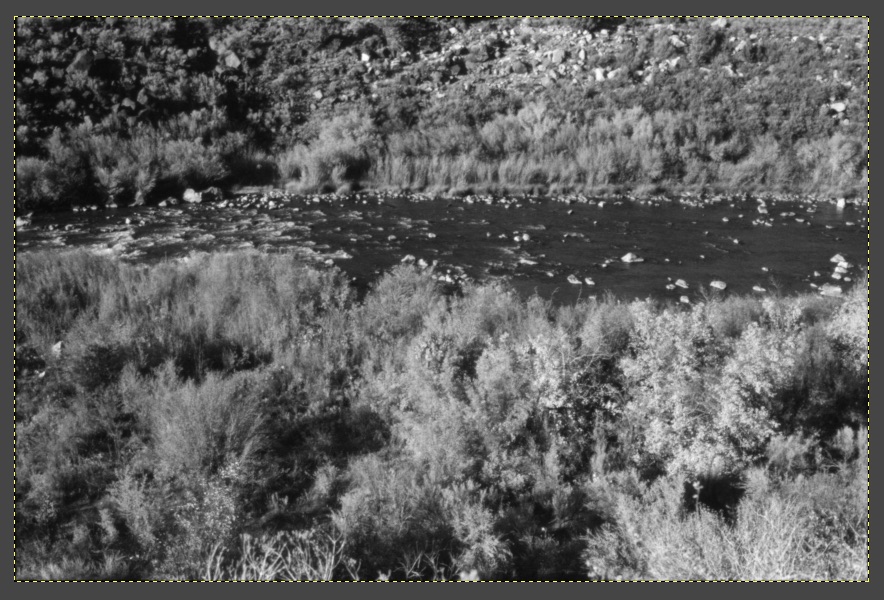 Green is a lot stronger but maybe not as much as you’d expect. The line of trees behind the shore plants are juniper and piñon. 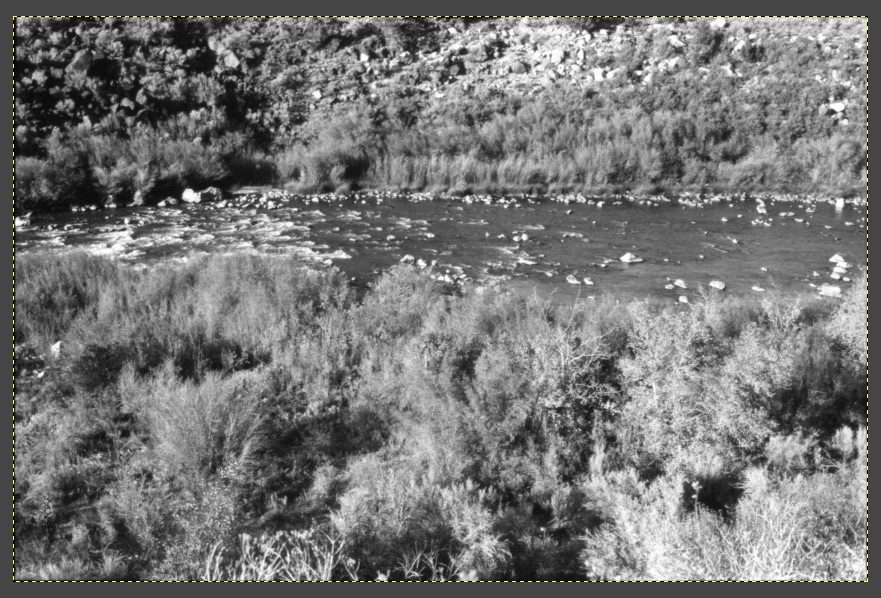 Blue is as strong or stronger than green, even for the green plants.

Blue is about what I’d expect a conversion to black and white to look like. It’s that overwhelming in this film.